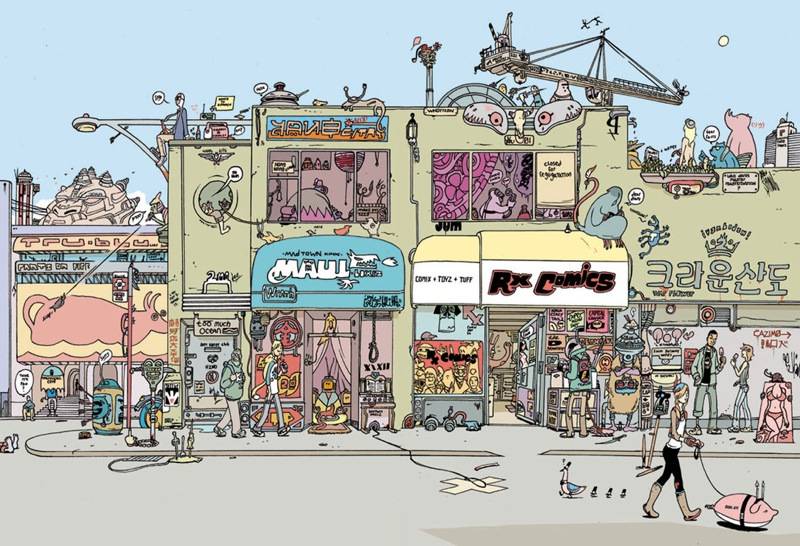 Brandon Graham is only half-joking when he says that King City – his wildly imaginative indie manga, featuring weaponized cats that you canÂ skateboard on – has nine lives.

The series looked liked it was dead in the water after original publisher TokyoPopÂ stopped publishing it amidst huge layoffs and restructuring almost five yearsÂ ago, in a move that sent Graham bouncing across the country from New York to Seattle, and eventually resurrecting the series at Image Comics.Â At Image, theÂ series was eventually completed, only to fall into a legal limbo that looked like theÂ book would never claw its way out of.

But that changes this week with the release of the King City collected edition,Â which features over 400 pages of urban action, weird drugs, zombie war veterans, aÂ Demon King, and so much more. 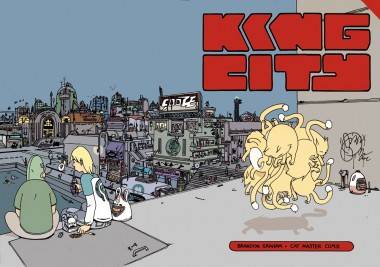 Brandon Graham: Sure. I was born in Oregon and grew up in Seattle. I wasÂ always wanting to make comics. I got really into Seattle’s graffiti scene for aÂ while, partly for lack of a comics community, but it taught me a lot about howÂ I feel about art. I moved to [New York] in my mid-20’s and eventually endedÂ up back on the West Coast and Vancouver where I met my misses, MarianÂ Churchland who also does art for a living.

I got into drawing porn when I was living in NYC. It was the only job I could findÂ that paid me to do my own comics. I would quit whatever real job I had whenever IÂ could do comics instead. It was fun – I had a lot of freedom as long as there were enough sex scenes in it.Â The first longer adult story I did was called “Perverts of the Unknown.” It was allÂ over the place. I had a guy ejaculating a fish in it, and then the publisher reigned me in a little and had me do a girl-on-school-girl thing called “Pillow Fight.”

I also did a bunch of shorts, one of which was this story, “Multiple Warheads”,Â that’s set in a fantasy/sci-fi Russia, about a woman who smuggles magicÂ organs, sewing a werewolf’s penis onto her boyfriend for his birthday. I had funÂ doing that one and now I’m a hundred and something pages into a new (andÂ less pornographic) continuation of the story. 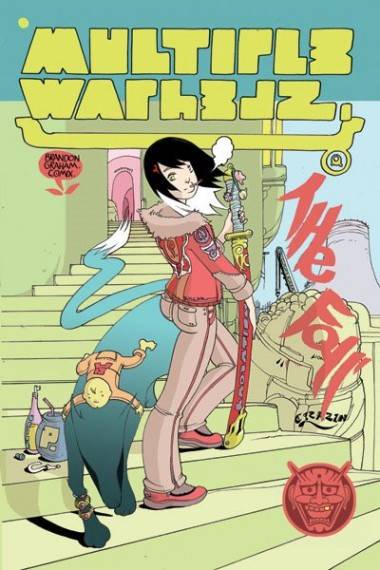 RI: King City is very imaginative and it doesn’t seem like you hold back fromÂ big, crazy ideas. Do you think you could have been creatively fulfilledÂ working for any of the big publishers, doing superhero stuff?

BG: Well thanks. I like reading some superhero comics but I don’t have anyÂ interest in making them. Plus I don’t think Marvel or DC would ever give meÂ much freedom to do anything I’d be interested in doing.

Awhile back me and my pal James Stokoe were kicking around the idea ofÂ what we would do if we had to make a superhero comic. I thought up the idea ofÂ having a lodge where criminals all meet to compare crimes and see if they could outdo each other. Something like that could be fun, but I think it’d work betterÂ outside a superhero universe. I can’t wrap my head around the idea wanting toÂ do a story where anyone fights crime.

RI: How does the comic scene in Vancouver hold up to Seattle and NewÂ York?

BG: I like it better. There’s a lot of good comic shops here and a lot of peopleÂ doing really exciting work.Â We’ve got the Inkstuds radio show about comics and a good drawing jam at theÂ Wallflower, next to RX Comics every month.Â For my needs it’s just a good place to be a hermit and get work done. I’ve got aÂ good group of friends here and the mountains are really nice.

RI: King City definitely feels like its own crazy place, but did Vancouver playÂ any inspiration?

BG: I drew the second half of the thing here. It’s a mix of here and New York andÂ Seattle. There’s a couple blatant nods to Vancouver. Blood Alley is in there, and IÂ drew my favorite comic store RX Comics on the inside cover of the collection. For a lot of scenes I would just go outside and draw something in my neighborhood. 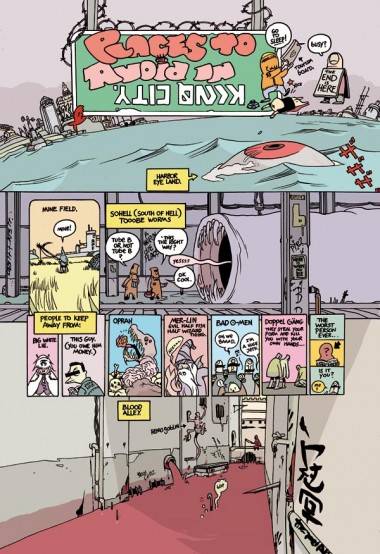 RI: King City ends suggesting that there are more stories to tell there…Â haveÂ you thought about revisiting the world of catmasters?

BG: The rights are a mess but ideally I’d love to do some more stuff with theÂ characters. I never expected it to get to a collected volume though – I like to sayÂ that the series had nine lives.

I’ve had some ideas for other catmaster characters, I was thinking about oneÂ about an old detective who used to be a catmaster.

RI: I’ve read that Rob Liefeld is really positive about the work you guys areÂ doing on the newÂ books, even though it’s pretty different from his ’90s Image Comics stuff. Do you have much contact with him?

BG: He sends me enthusiastic emails. I haven’t dealt with him all that much, weÂ don’t hang out or anything. I’ve been keeping him informed on what my plans areÂ and asking for his okay when I’m planning something dramatic with his characters.

RI: There’s been a lot of depth to the world-building and mythology alreadyÂ laid down in the first two issues of Prophet. I was wondering what thatÂ collaboration is like with artist Simon Roy, and the artist on the next twoÂ issues, Farel Dalrymple. 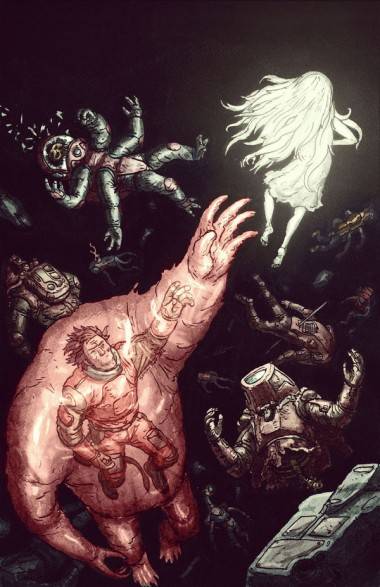 BG: We do a lot of talking about what we could do. We send back and forth a fairÂ amount of sketches. I drew some sketches for the vagina alien in the first issue, and with stuff likeÂ the jell city I sent Simon a PhotoShopped together image of a stack of jellyfishÂ in the Grand Canyon.

Most of my drawing input is sometimes drawing over the other guys’ layouts toÂ convey other ways something might be shown.Â It’s really collaborative on all fronts, Simon goes over my scripts the same wayÂ I do his layouts. The idea that rather than just being an artist and a writer on aÂ book, it can be our combined efforts to make it as good as we can.

RI: I’ve heard the high-concept of your Prophet described as sort of ConanÂ in space, which sounds about right, but what are your sci-fi influences forÂ writing the book? I was wondering if the G.O.D. satellite is an homage toÂ Philip K. Dick’s VALIS at all…

BG: The original Prophet had a satellite that was riffing off of Jack Kirby’sÂ OMAC comic and the old Prophet had a much more religious slant so G.O.D.Â was a nod to both of those things.

I never got too into Philip Dick’s stuff, The sci-fi that really resonated with me wasÂ stuff like Robert A. Heinlein‘s books, [Joe] Haldeman‘s The Forever War and [William] Gibson‘sÂ Sprawl trilogy.Â A lot of what I’m aiming for with this is ’70s comics, like the old black and whiteÂ Conan magazines and stuff I was reading in Heavy Metal magazine when I was a kid.

I have noticed that I need to be reading to write, but it doesn’t have to be scienceÂ fiction, just something that I think is beyond my abilities to remind me how wellÂ things can read. And I have a copy of [Philip Jose] Farmer‘s sleazy and violent book A Feast Unknown that I’ve been reading chapters of while I work onÂ Prophet. And me and Simon and Farel have all been watching a lot of old ’80sÂ Tom Baker Doctor Who, and I’ve been getting back into Blake’s 7. I like the feel of those shows. The worlds they’re set in feel kind of bleak and huge.

RI: You’re not afraid to speak your mind when it comes to voicing yourÂ problems with comics industry in interviews and on your blog. Say you findÂ a genie tomorrow whose powers are only effective on the comics industry.Â What are your three wishes to change the industry?

BG: Mmmm…Â Okay. First, I’d love to see some really good editors who are out thereÂ looking for new and more diverse creators,Â I’d love to see some real creative competition, I feel like it’s suchÂ an accessible art form that’s unfortunately in an industry that walls itself off inÂ really shitty ways. So you don’t get the best of the best at drawing and writing asÂ much as a lot of low quality and nepotism.

Me and a friend were kicking around an idea about giving two high-profileÂ artists each 15 pages and a theme and publishing the stories back to back andÂ marketed like a prize fight.Â There’s a lot of ego in comics but it’s really untested. It would just be nice to seeÂ some of these guys really try.

Second, if I could, I would kill the Disney/ Warner corporate end of comics.Â Marvel and DC have such long histories of hurting the creators who have doneÂ the best work for them. They just aren’t good for the art form.

And as much as I like some of the characters and a lot of the creators’ work theyÂ put [out], I don’t think those creators who really love comics would still make themÂ and hopefully would do more of their own work.Â If they stopped making Batman comics tomorrow there would still be more thanÂ any sane person would want to read in a lifetime.

And third, I’d like to see comics stop trying to impress other mediums. A friend ofÂ mine calls it the “I-wish-I-were-in-movies” industry.Â I think comics is better than that.

RI: Lastly, what comics are you surrounding your desk with right now forÂ inspiration?

BG: I’ve got an old Matt Howarth comic called Konny and Czu. It’s a sci-fi comicÂ set in non-human space with no humanoids in it. The main characters are aÂ centipede and three floating rocks.Â And I’ve got an Otomo book that I can’t read that follows the effects of a war allÂ around the world, with chapters in Japan and the Middle East and NYC.

An Asterix book, Asterix and the Black Gold, and a Moebius art book ofÂ drawings he did of Venice. 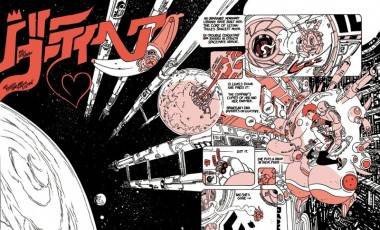 Update: Brandon Graham posted an image on Twitter last night, featuring specialÂ bookmarks he had made up for anyone that purchases a copy of King City fromÂ RX Comics.