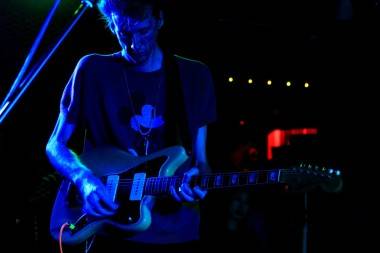 A surprisingly candid and even friendly Bradford Cox returned to the Biltmore Cabaret last Wednesday night in support of his critically acclaimed 2011 release Parallax (under the moniker of Atlas Sound). The subject of conversation that couldn’t be avoided was Cox’s meltdown on the same stage in 2009. It almost felt like people in the crowd were placing bets to see if he would blow his fuse once again.

In an unexpected move, Cox – who’s been back to the city twice with his band Deerhunter – recounted the dark moment, admitting it was the worst show he had ever played in his life. To defend his outburst, he explained how his backing band’s van had broken down in Seattle, causing him to improvise a completely different solo show at the very last minute. Moreover, a loud and brazen group who attended “under the pretense of coming to watch music” served as a major distraction.

Cox hilariously looped together some chattering noises and re-enacted his “deer caught in headlights” look to place the audience in his shoes. However, he embarrassingly admitted that he didn’t put on a good enough show to make the audience want to pay attention. In a self-deprecating moment, he confessed, “I wasn’t doing anything good enough… It was really bad actually.”

Last night’s show was a far cry from 2009’s disaster. In fact, I dare any of the attendees to say it wasn’t one of the most awe-inspiring, heartfelt and adventurous musical displays of 2012. Opening with Parallax’s title track, the gaunt and gangly savant started each track in a stripped down acoustic fashion, eventually adding layer upon layer of bass, drums and synths until they shaped into a tense and technological bedlam of sound. Apparently it was the late Trish Keenan of Broadcast who influenced the science-fiction edge to the record, despite Cox’s predilection for Neil Young.

Cox rearranged every track of Parallax for his live set. The upbeat “Angel is Broken” was transformed into almost a eulogy; heavy, pained and sullen. You could not help but be shaken by the acute frustration in his voice and his overall presence. Every word he sang seemed to have a bite, particularly as he screamed “Cold” repeatedly at the end of the psychedelic “Modern Aquatic Nightsongs”.

He ended the show dedicating “Terra Incognita” to Keenan, delivering the poignant track with overwhelming vulnerability and sincerity. This time around, all eyes and ears were focused on Cox, and you would have been able to hear a pin drop from a far corner in the room. If he was looking for redemption in Vancouver, it’s safe to say he’s found it.