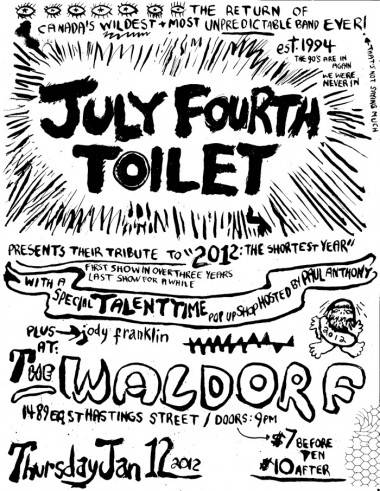 The return of July 4th Toilet

At one time not too long ago, July 4th Toilet was the one band in Vancouver that could be counted on to never play the same show twice. Some of those legendary theme shows include one dedicated to covering the worst Dylan album ever released (simply called Dylan, and consisting of out-takes from Self Portrait); another of nothing but 30-second songs; a show dedicated to K-Tel’s Rock Fantasy record; an Easter show with all songs about the Easter bunny (with a costume by Jason Mclean) and a celebrity roast for Jesus Christ; “Your Poems Set to Music”; and an all-Paul Williams set (with Paul Williams himself sitting 10 feet away).

A collective with a rotating cast of characters, the band was a musical performance art act that never failed to pull something new out of its hat. They were a little bit of oddball San Francisco in the usually risk-averse local music scene.

But a few years ago Robert Dayton, one of the architects of the July 4th Toilet sound and mythos, moved to Toronto, effectively disbanding the group as well as his duo with Stephen Hamm, Canned Hamm. On Thursday Jan 12, however, Dayton and his merry band of musical brigands will reunited onstage at the Waldorf. Dayton is also playing a show under the name, The Canadian Romantic, another of his music projects, Jan 13 at the Dunlevy Snack Bar (433 Dunlevy) which features not only a performance but a dinner option as well (The Canadian Romantic tickets). Dayton’s blog promises, “This will be a one of a kind evening that combines large amounts of shared laughter with soft music and unsettling feelings of desire…!”

We asked Dayton a few questions via email in anticipation of his prodigal return. 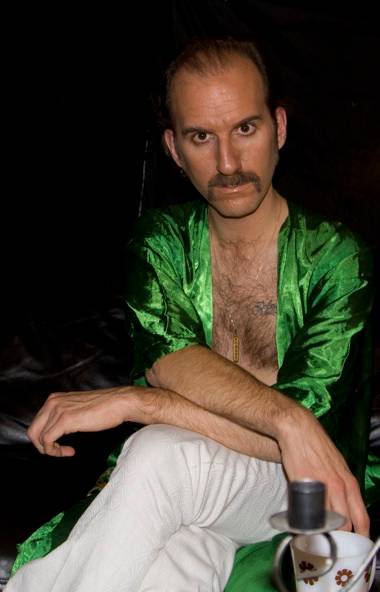 Shawn Conner: Robert Dayton, you moved from Vancouver to Toronto how long ago? Are you more satisfied creatively?

Robert Dayton: I moved over three years ago. This will be my first visit back to show how time changes things for everyone. Am I more satisfied creatively? That is a difficult question.

Obviously surroundings and experiences affect creativity. I was bitter and frustrated before I left even though there were some tremendous things that happened (be it acting opportunities, July Fourth Toilet releasing a vinyl LP [July Fourth Toilet Presents: Balls Boogie Featuring: Me and Bobby McGee Plus!: Kentucky Whore and Many Others] and performing it at the Vancouver Art Gallery and being picked as Julian Cope‘s album of the month, DJing at the Biltmore and being second banana for Paul Anthony’s Talent Time, the release of Canned Hamm’s Xmas album [Sincerely Christmas], I could go on…)

But I really needed a change. And there certainly have been opportunities in Toronto. The glass ceiling is only a couple inches higher. It’s allowed me to see Canada as a greater whole. I could not have come up with The Canadian Romantic if I hadn’t moved to Toronto.

Perhaps I do not fit in anywhere. And I have certainly had my share of rejections that way all over. Sometimes it’d be nice to have a sense of belonging. But I hope that in the long run being distinctive in a land where banality is celebrated, maybe, maybe it will pay off. Or maybe it won’t. Maybe I’m beingÂ  self-righteous. Coming back to Vancouver to visit has allowed me the opportunity to make a pen-and-ink art book. I am also writing for The Toronto Onion and lotsa other places. Art shows! Doing neat acting stuff as well! Scare Tactics [TV show]! Ivory Tower! And my easy listening DJ nights “Feelings” [at various Toronto venues]. So things are a-going… I just have to remind myself of these things whenever I fall into self-pity mode.

SC: What prompted the reunion of July 4th Toilet?

RD: Reunion is such aÂ  funny word- but it has been over three years since we’ve done anything. I was coming to Vancouver to visit and to do An Evening With the Canadian Romantic one-man show, dinner, and book launch through PITT Projects and it just seemed natural to get us together.

Because of the lucidity of the group and core mandate – every show being a different theme – we’ve never had to do a look-back-at-the-past type reunion. Unless that was the specific theme of the show. We did do a 25th anniversary set when we opened for Zip Code Rapists at the Malcolm Lowry Room [a now-defunct venue in the North Burnaby Inn]. Of course, we’d only been around two years at that point, it was in 1996.

It will be great to play with Julian [Lawrence], Mark [Gabriel], Andre [Lagace], Jody [Franklin], Kim [Stewart], and Josh [Stevenson] again. Clancy [Dennehy] is on his honeymoon so he can’t be there and Susan [Rekers] is in Roberts Creek and can’t make it, my brother Frank [Acerman]’s got stuff happening,Â  but who knows who else may show up? We’ve had over 80 members from the ages of eight to 80 but much of the core will be doing this show! 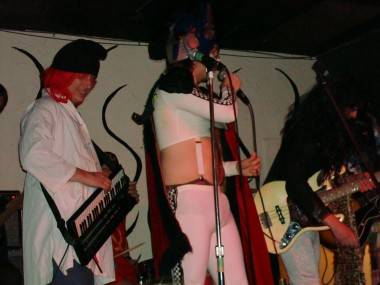 SC: What can you tell us about the upcoming show’s theme?

RD: The theme is “2012: the shortest year ever.” We will be covering a lot of songs around that idea as well as doing some of our own work and transcendentifying and doing rituals through sounds and visions both explicit and implied, as always it will be an extravaganza, a SHOW!!!.

SC: Would it be possible to put together a July 4th Toilet – Toronto edition, or is it very much a Vancouver thing?
RD: It’s strange, I’m the only member who has never missed a show. Even Julian missed a show or two! I had hoped to rectify that. I hope to miss some shows one day. We only ever went on one small tour of the Northwest opening for the legendary 3 Day Stubble as well as The Sun City Girls. Someone had once told me that now more than ever is the time for July Fourth Toilet, that it makes more sense now, I would love to tour! It can be so hard to get us together and get things done, we are all such strong personalities! Marc Bell played snorkel with us years ago and he told me that coming from the East, he had not seen anything like us, that we did have such strong West Coast links to numerous other bands from the ’90s, some aforementioned, and he suggested I write a book: do I really have to be the guy to do it? I was considering burning my archives two weeks ago.

In the ’70s one of my favourite bands The Holy Modal Rounders had an East Coast line-up and a West Coast line-up. Anything is possible and now Shayne Ehman who was with us for much of our first several years and even played on our last album and at the VAG lives in Toronto… soooo… hmmm… and there’s some freeky people in TO…

That could serve to make us even moreso Canada’s wildest and most predictable band ever.

I do have the melodramatic glitter act Hallmark in LA. And Canada’s most exciting band Wet Dirt is really gaining steam in Toronto, Tobey Black who was in MAOW and The Gay is with me in Wet Dirt, we’ve known each other for 20 years! And there’s a couple fresh talented faces named Ian and Tamsen as well in Wet Dirt. Now if I could just get some – ahem – backing. DIY has sucked me dry.Â  I recently bumped into VancouveriteÂ Rebecca Russell who is out here working on her movie [Lucky Ho] with Bruce McDonald. She told me that I needed to be discovered I think she’s right. She asked if she could discover me…maybe she could make a tourism ad: “Discover Me.”