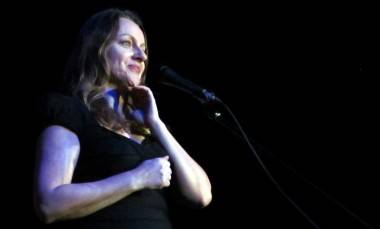 The Rio Theatre's Corinne Lea addressing a crowd of supporters at a fundraiser for the theatre held on January 26. Rachel Fox photo.

Faced with an actual embargo prohibiting it from screening films of any kind, East Vancouver’s Rio Theatre held a fundraiser on Thursday night to raise attention and to their very real plight.

Hosted by Kitty Night’s emcee The Purrfessor, the evening was by donation, theÂ  popcorn was free, and the booze flowed while jazz quartet Pandora and the Locksmiths provided musical accompaniment to burlesque performers Nikki Ninedoors and Miss Fitt. 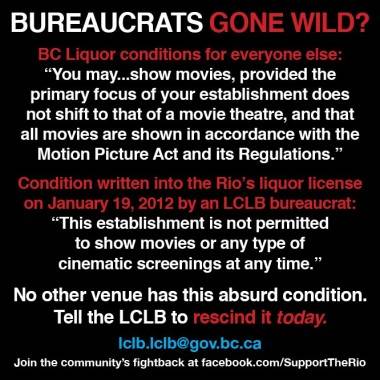 The bizarre provision applied by the British Colombia Liquor Board has some very real consequences for the independent theatre – to the tune of approximately $2,000 per day and soaring to about $20,000 in lost income over the course of the next week, according to this recent Facebook posting by theatre owner and operator Corinne Lea. Adding to the general sense of irritation over the situation is the uncertainty faced for some 30-odd employees of the theatre. 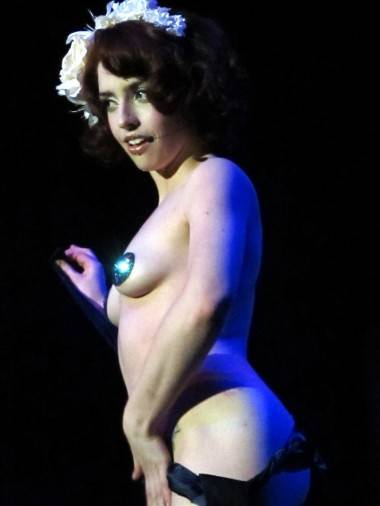 Single-mother Lea, who also owns and operates Scout Boutique, spent $20,000 in legal fees in order to obtain a liquor license for the multi-purpose Rio.

Film audience attendance has declined everywhere over the past few years, and in an effort to adapt the theatre opened itself up to more than just movies. Obtaining a liquor license for those nights when the theatre plays host to concerts was a critical move in a last-ditch effort to keep one of the city’s last remaining single-screen theatres operational. 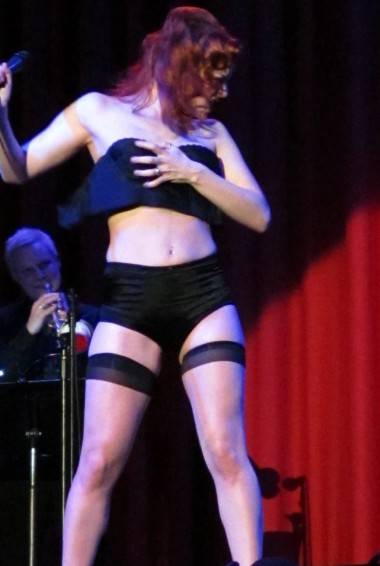 A case of the drapes clearly matching the curtains. Miss Fit performing her ode to the BC Liquor Control Board. Rachel Fox photo.

The turnout for the last-minute event was heavy in Rio regulars and other neighborhood faces. It was encouraging to see politicians like MLA for Vancouver-Mt. Pleasant Jenny Kwan, who has actively lent herÂ  support to the theatre in the wake of the recent provision, in attendance.

Support for the change in B.C.’s antiquated (not to mention nonsensical) liquor laws are not limited to Vancouver or The Rio. This online petition created advocating for updating the current laws that prohibit the sale of alcohol at movie theatres, has garnered over 4000 signatures since its creation in October, 2011. Victoria BC’s independent, single-screen Roxy Classic Theatre is facing similar issues to that of The Rio, according to this article posted in the Victoria Times Colonist. 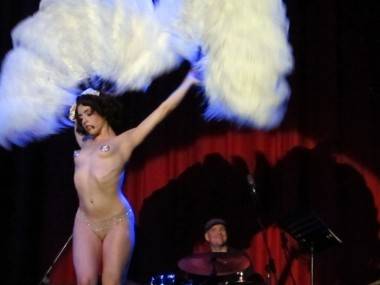 I love the expression on the drummer's face. Rachel Fox.

In addition to following the Rio’s website and their Facebook page for updates and information, this community support page lets the public voice their support and shows letters sent by supporters to their representatives, and the various responses.

As encouraging as the outpouring of community support and media attention is, it has yet to actively change the situation. Realistically, the theatre has a finite amount of time in which to operate vis-a-vis the province’s embargo. It would be catastrophic to lose yet another one of Vancouver’s interesting, independent venues over what appears to be a very narrow-minded application of outdated, arcane legislation. The most important thing that the public can do is, of course, to voice their support for The Rio in demanding an immediate interim solution to their grave dilemma. 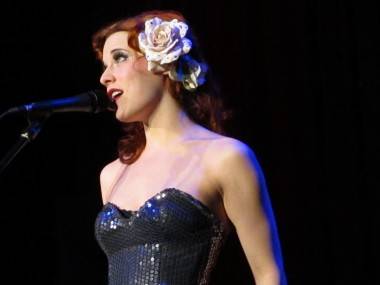 And then, after you write and send your thoughtfully written letter in support of The Rio to your local MLA, Premier Christy Clark (premier@gov.bc.ca) or those paper-pushers at the BC Liquor Board (lclb.lclb@gov.bc.ca), head to The Rio on Saturday, Feb 4 for a tasty adult beverage,Â  some organic popcorn with real butter and a benefit fundraiser featuring Patrick Maliha and several other local comedians. And try to imagine how awesome it will be when this classic theatre’s beautiful silver screen is, hopefully, lit up again.