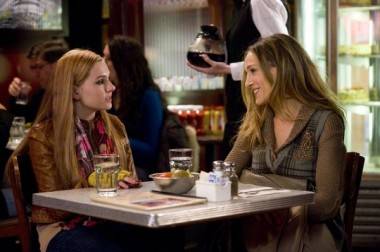 All I could think while I was watching Garry Marshall’s New Year’s Eve was how much each of the actors must have gotten paid to appear in such a film. Surely Robert De Niro, Hilary Swank, Michelle Pfeiffer, and even Halle Berry know better, right? I mean, no one expects much better from Sarah Jessica Parker or Zac Efron (who actually did the best of them all with his role, ironically) or Ashton Kutcher, but is De Niro really so far past it his prime that he has to resort to appearing in a film that amounts to no more than a vehicle for new levels of product placement?

Pardon if the above list of actors’ names constitutes a spoiler, since the long list of “surprise” star cameos in this film is its main selling point. Different name actors (and one aging rock star, name rhymes with Bon Anchovy) appear on-screen at regular intervals and basically wink knowingly at the camera, as if to say “Isn’t it so amusing that I am in this movie? You can all clap now!” 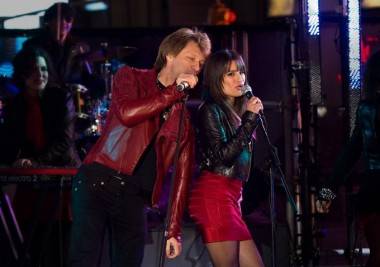 Still, it’s a holiday movie, so our standards shouldn’t be that high – everyone expects corny jokes and cheesy platitudes from a seasonal offering such as this. But in exchange for putting up with the out-of-the-blue musical numbers and all of the talk about love being the only thing that matters, a few genuine laughs or the odd realistic moment might have been nice. At the very least, the audience should not be bored half to death by the whole thing.

It’s a bad sign, even for junk like this, when people are audibly yawning over the (awful) soundtrack and the woman next to you has literally fallen asleep. I found myself wishing desperately for the end – the end being when the ball drops on New Year’s Eve – so I could go home and forget it ever happened. 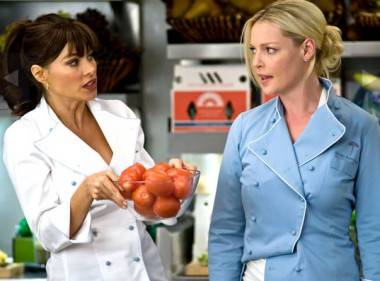 Caterer! What a great job for a romantic comedy heroine!

All that really stands out in New Year’s Eve is the in-your-face product placement. The script reads as though it was written in by the studio’s marketing department. It’s kind of genius, really, to set a movie almost entirely in Times Square to take advantage of the billboards constantly showcasing various products and brands in bright lights. And outfitting all of the revelers with co-branded New Year’s Eve hats and other paraphernalia was handy too, I am sure.

For marketing students, then, New Year’s Eve might be worth a viewing. Insomniacs, Bon Jovi fans and anyone jones-ing for a Katherine Heigl romcom fix might also enjoy. All others are advised to save their money and watch a tried-and-true holiday classic.