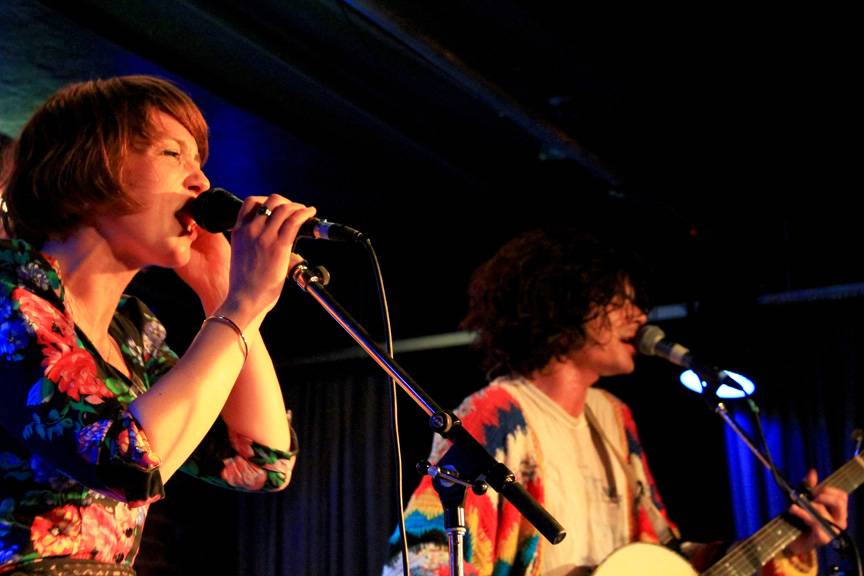 Up-and-coming LA band Grouplove inspired some canoodling amongst the crowd at last night’s show at the Electric Owl. The band of friends met while completing an artists’ residency in the Island of Crete and eventually melded their musical talents together when they returned to the US. The fruits of their friendship and labour are represented in their first LP, Never Trust a Happy Song. But this band truly shines in front of a live audience.

There was a strange dichotomy amongst their fans; half looked like trendy, barely legal undergrads, and the other was your 9-to-5 thirtysomethings loosening their ties on the sweaty dancefloor. Everyone was downing rounds of liquid courage as openers Family of the Year played their set of hippie pop-rock.

With their beach-y hair and carefully chosen vintage pieces matched by catchy melodies and country harmonies, they could not have been a clearer picture of the L.A. music scene. The troupe’s got a lot going for them – fresh and uplifting sound, gorgeous looks and an enviable wardrobe – but it was altogether a very safe package. Hopefully they become more adventurous musically with their future projects.

Everyone in the audience seemed to be making eyes at each other while waiting for Grouplove. Even as the band leaped into the ’80s dance- pop of “Tongue Tied”, the audience seemed more interested in prowling rather than watching the show. But eventually lead member Christian Zucconi grabbed their attention with his squeaky, yet controlled and billowing voice. Also on vocals as well as keyboards, Hannah Hooper quickly became the epicentre of the room. Channeling Molly Ringwald with her red bob, retro floral dress, frantic dance moves, and gleaming smile, she nabs my prize for Miss Congeniality of Indie Rock.

The small stage didn’t seem big enough to contain the quirky and unpredictable energy of Grouplove. Guitarist Andrew Wessen and bassist Sean Gadd looked like they were about to fall off the corners of the platform while jumping to the ska-infused “Lovely Cup”. Each also took their turn on lead vocals at one point, proving that each member holds equal weight and importance in their tight group. Drummer Ryan Rabin (who happens to be Yes’ guitarist Travis Rabin‘s son) claimed the spotlight on “Time Moves Slowly”, banging on his kit while standing up, adding a greater sense of aggression and urgency to the track.

The evening did have its lulls. My jaded self couldn’t help but roll my eyes at the cheesy “Love Will Save Your Soul”. It also felt a bit contrived when Hooper decided to draw a grotesque, spotted fetus on a large white board while the rest of the band got lost in a psychedelic instrumental. But all in all, Grouplove knows how to put on a show and get their fans excited. Their breakout hit “Colours” ended the night at an all time high and of course, they exited the stage in a warm group hug.