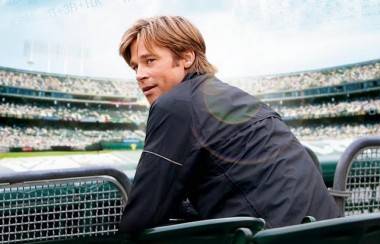 This Week in Movies: Moneyball, Twixt, Le Skylab and Spielberg

– “Baseball makes for better movies than actual viewing.” I’m offering that little maxim as a free poster slogan to the producers of Moneyball, which opens this week. The true story of how Oakland As’ GM, Billy Beane, used computer analysis (sabermertrics) to select his team, and found great, albeit fleeting, success, stars Brad Pitt, sporting a snazzy blue visor cap, alongside Jonah Hill as the man with the plan. For those not of the sporting variety, major league baseball has long been a game of the have and have-nots – more so than most professional sports leagues – with wealthy franchises being able to cherry-pick the best players each off-season with the lure of megabucks that smaller market teams cannot compete with. During the 2002 season, with a paltry payroll of roughly 40 million dollars, Pitt – as Beane – follows the system developed by Hill to assemble a roster not based on market value, but on maximum bang for his buck, and finds his club competing with the big boys in the race for the playoffs.

– Steven Spielberg will receive the 2012 David O. Selznick Achievement Award from the Producers Guild of America for his continued stranglehold on all things Hollywood. Seriously though, the award recognizes a film producer’s body of work, and in this instance, this award actually feels long overdue. Spielberg has racked up every major award for his directing, but his producing is, for me, far more impressive an achievement. He has lent his name, and talents, to launch a thousand careers over the years, including Robert Zemeckis and J.J. Abrams. 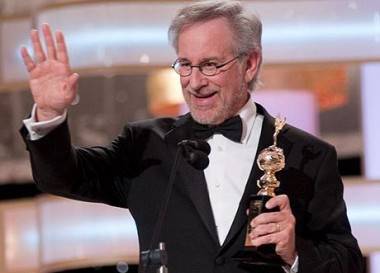 Steven Spielberg collects his Cecil B. DeMille Award at the The 66th Annual Golden Globe Awards.

– Most remember Julie Delpy, the French ingÃ©nue that was all the rage in ’90s cinema, either as Celine, the enticing European chance-meeting of Ethan Hawke, in Before Sunrise, or as Dominique, the frustrated wife of a small man with big ambitions, in Kieslowski’s White. Delpy, however, has fancied herself not just an actress, but musician, and more recently filmmaker. Her directorial debut, 2007’s 2 Days in Paris, was a jerky, awkward affair that examined the disintegration of a hip, young couple’s relationship. Her latest, Le Skylab, which recalls Delpy’s childhood summers with her family in France, is currently in competition at the San Sebastian Film Festival, with eyes on a North American release sometime this fall/winter.

– With much of the global film press returned home from Toronto, Filmmaker Magazine has published a great piece on Francis Ford Coppola’s intimate chat with an audience at the Bell Lighthouse Theatre in connection with this year’s edition of TIFF. After the engagement, Coppola screened Twixt, his latest auteur piece. Unlike Tetro and Youth Against Youth, however, Twixt appears, at least initially, much more accessible. The story revolves around a writer, on a promotional tour, who gets involved in a murder investigation within a small town. 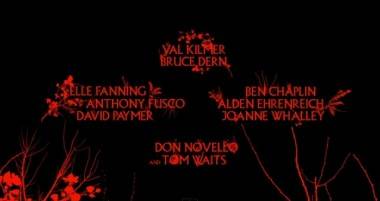 – REM has officially announced they are disbanding – bad news for some, but potentially great news for film fans, as the band have been actively involved in movies throughout their career. Songs from their catalogue have graced screens large and small for decades, while numerous tracks metaphorically, or downright obviously, reference film, such as “Departure” (about River Phoenix), “Monty Got a Raw Deal” (about Montgomery Clift), and “Me, Marlon Brando, Marlon Brando and I”. Mike Mills and Peter Buck scored Milos Forman’s Man on the Moon, about the life and times of comedian Andy Kaufman. Frontman Michael Stipe has been actively producing both TV and film for awhile, and has a Vancouver connection: the Macaulay Culkin comedy, Saved!, co-produced by the singer, was shot right here Â on our dusty shores.