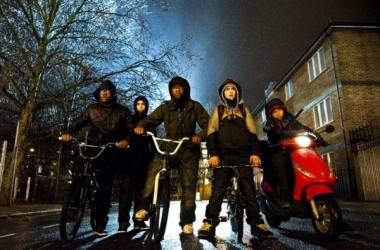 It has only screened once in Vancouver, but I’ve seen Attack the Block three times in two provinces and two countries. I’ve made a point of schlepping my way into two foreign movie theatres to see it in limited release.Â It’s that good.

Lacking the requisite millions needed to make an alien invasion film these days, rookie director Joe Cornish (blessed from on high by Shaun of the Dead director Edgar Wright) tried something almost successfully bred out of modern Hollywood science fiction: he wrote some characters.

Anchored by stunning performances from a host of adolescent actors and a breakout role for John Boyega (recently cast in Spike Lee’s HBO boxing series Da Brick as a direct result), Attack the Block tells one of the most clear-eyed stories about boys growing into men since Where The Wild Things Are. The central theme of the two films are similar: the young male predilection toward destruction as a stop-gap for confusion, boredom, and testosterone overdose causes some catastrophe to be overcome with onset maturity. It just so happens that catastrophe caused by the overzealous actions of Moses (Boyega) and his South London housing project gang in Attack the Block is a full scale alien invasion of the district. Whoops. 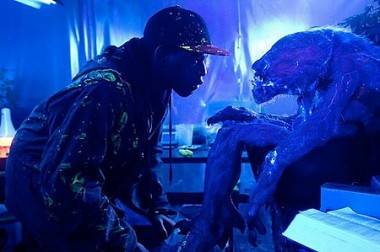 "gorilla-wolf motherfuckers" in Attack the Block

The script positively crackles on screen, with every well-conceived action set-piece sprinkled with just a bit more suspense because you actually give a damn what happens to these kids as they run from the most iconic movie monsters in a decade. As the hulking “gorilla-wolf motherfuckers” with their glowing blue teeth and vacuum black fur maim and kill, you feel it. Every death means something and every injury is dire. Combine that with one of the most memorable soundtracks since Blade Runner and you have a Spielberg-rivaling summer flick in summer festooned with flawed Spielberg-backed flicks.

In retrospect, Attack the Block seems oddly prophetic of the U.K. riots that made headlines this summer. While its direct grappling with the class warfare affecting the protagonists is limited and mostly even-handed, Attack the Block takes pains to make “the block”, the council housing estate Moses and his gang swear to protect from incursion (foreign or domestic), a character unto itself. Their poverty and social situations sit as loud, passive characterization, another efficient story-building nugget built in by Cornish to set Attack the Block apart as one of the best films of 2011.