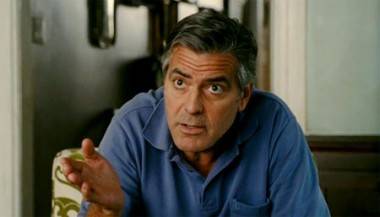 George Clooney in The Descendents (2011).

– The 38th Telluride Film Festival, that oasis of cinema in the Midwest, begins this weekend, and boasts a handful of interesting films: most notably, Alexander Payne’s long-awaited return behind the camera, The Descendents, starring George Clooney.

Which leads to the question, what happened to Alexander Payne? The man seemed to be able to do no wrong after debuting in 1999 with Election, and following it up with About Schmidt and Sideways, before dropping off the Hollywood radar for the better part of seven years. David Cronenberg’s take on the Freud-Jung psycho-battle, A Dangerous Mind, will also run; it’s nice to see Cronenberg back to what made him – perversion, and all its delirious trappings. And finally, Martin Scorsese will unveil his three-and-a-half hour documentary tribute to George Harrison, Living in the Material World. I actually find myself interested in this one. Not simply because Harrison was a very good guitarist and generally amusing man, but Scorsese is running out of rock gods to document – a fact I used to mock, but now think I may miss when he’s finished.

– From legendary musician to legendary documentarian: Frederick Wiseman (Welfare, Domestic Violence) was given the honour of opening this year’s edition of the Venice Film Festival, presenting his new documentary, Crazy Horse, a glimpse into the lives of the dancers and inner workings of the Parisian cabaret of the same name. Other notable films scrapping it out for the Golden Lion are George Clooney’s The Ides of March, Phillipe Garrel’s Un Ã©tÃ© brÃ»lant starring Monica Bellucci, Andrea Arnold’s Wuthering Heights, and New York filmmaker Abel Ferrera’s 44:4 Last Day on Earth, with Willem Defoe. See the full line-up here. 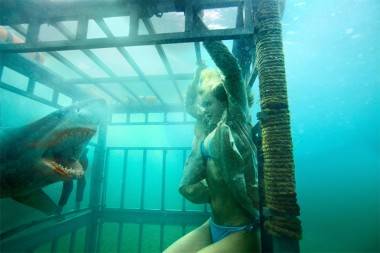 – Apollo 18 (38 per cent) also opens today. In 1999, The Blair Witch Project stunned the film industry by grossing nearly $250 million worldwide, and for the price of a ham sandwich (as movie industry ham sandwiches go). Naturally, a number of pseudo-documentaries have followed, from the sci-fi monster movie Cloverfield to the Norwegian horror film Trollhunter to the creepy Paranormal Activity. Directed by Gonzalo LÃ³pez-Gallego, Apollo 18‘s premise is that secret footage from a disastrous 1972 moon landing has leaked to the media and has now been turned into this new documentary, detailing how the astronauts encountered other forms of life during their stay. The faux-doc is typically a feast-or-famine genre: it’s either downright awful or destined for cult status. It will be interesting to see which category Apollo 18 finds itself in.