Review: Transformers: Dark Of The Moon

(Hereafter referred to as Transformers 3)

So.Â That happened.Â Well, sort of happened.Â For almost three hours.Â Yep.Â Boy, that Octopus Prime sure has some stamina…

When I heard that there was a third installment of the Transformers franchise approaching, I was full of mixed feelings. I hated the second movie, but I still love the first.

Through the interwebs, I heard that Michael Bay apologized for the atrocity of the second. For this reason, I held on to a small shred of hope that the third (and hopefully final) installment in the series would regain some of its former magic. That perhaps a new female lead would refresh the cast. That maybe, just maybe Michael Bay would retreat from using silly mini-transformers and dumb voices and focus on the story.

After two-and-a-half hours, I was zero for three.

If I could sum up the issues with the movie it would be in the following critical trifecta:

1 The pacing is completely off. Moments that should have been built up were glazed over. Battles that should have lasted 20 minutes lasted an hour. Scenes that had the capacity to ignite our emotions fizzled out with no follow- through. Too many comedic characters were given screen time, only to peter out and blend humourlessly into the background.

2. The movie is marketed purely on visuals. Yes, the Transformer CGI is amazing. Yep Rosie What’s-Her-Nuts is a beautiful, other worldly underwear model, Dr. McDreamy is a sexy jerk, and Shia LaBeouf delivers every line with his signature ADD charm.

However, all these things do not a story make. I like a big-budget action movie as much as the next person, but I need some semblance of a storyline – one or two things that I can get attached to, which make me care about the outcome of the film. Getting attached to something will even make me forgive an outcome that I predicted on the ride to the theatre.

The small annoying Jar-Jar-esque transformers appeared far too often, taking the place of the racially controversial twins from the second movie. The important character-building moments were shied away from or swept under the rug. The film was littered with several long shots, designed to evoke emotion with a ballad playing us down the dusty road. Normally I’m a massive sucker for that kind of release, but when the story fails to explain what I’m supposed to feel upset about, the lump in my throat passes as quickly as my desire to clean the bathroom. 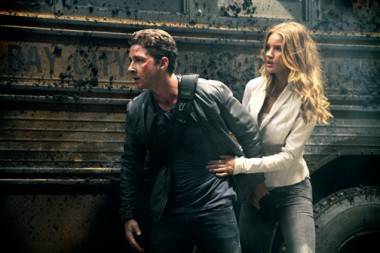 MINOR SPOILERS TO FOLLOW – Continue at your own risk:

3. There are SO many missed opportunities! There was a pretty cool setup in which the animosity between LaBeouf’s character and Dempsey’s character was mirrored by the standoff between Optimus and his opponent.Â  Instead of following through with the mirror effect and building the parallel into an ultimate double standoff, both battles fell short and ended separately, and uninterestingly.

The scene in which a main character faced certain death and said his goodbyes lasted a mere 15 seconds before some twisting metal form inadvertently saved the day. The Decepticon invasion destroyed a city with less than a minute of screen time, while the final fight lasted a staggering 50+ minutes.

Optimus Prime, a character who has thrilled males young and old for generations, packed about as much punch as a Stan Lee cameo in a Marvel movie, and was just about as clichÃ©d. And finally, who put a cloak on Megatron to convince us he was in hiding? Good thing I mistook him for Dumbledore for a couple minutes, or that might have been a big waste.

The beginning of the movie was an amalgamation of old footage from the space race with Kennedy and Nixon showing up on screen first from archived footage then portrayed by actors. It was a jumpy start, bouncing back and forth between the real footage and the scripted stuff. This failed to create a positive flow in the beginning sequence.

The next 30 minutes were a bit more promising, providing some charm and quick wit reminiscent of the first movie, though there was quite a bit of wasted screen time full of side characters and unimportant scenes. Once the midpoint was reached, however, things quickly fell off. True to form, Bay tried to cover the massive plot-holes with massive amounts of action. 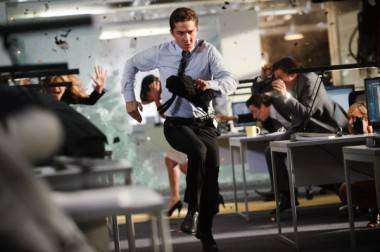 Here’s the thing: after a while even the coolness of a giant mechanical worm gets old and tired. Too many characters and sub-stories weighted down an already frail plotline and dragged the story to a screeching halt.Â  Once the plot was all but discarded, the epic final sequence took place. Can you still call it a sequence when it’s an hour long? At this point, I was ready to close my eyes and transform into a giant pillow (Team Autobot, of course). When the battle ended, a whopping thirty seconds was spent on closure before the credits rolled and the lights were on.

Too many people, too little story and some generalized silliness left me with the feeling that Michael Bay and Ehren Kruger got tanked, and plotted this film while consulting with George Lucas and taking their emotional cues from Twilight. It wasn’t better than the second, it was nowhere near as good as the first, and I won’t be adding it to our growing Blu-Ray collection unless it’s gifted our way with a personal apology from Bay himself.

If you’re a huge fan of the franchise, go see it – it has some wittiness to carry you through, and the hour-long action sequence may thrill you more than it nonplussed me. Just make sure to take a big long bathroom break at the hour and a half mark.

**If you think I’m being too hard on the story, you can check out Devin’s list of questions over at Badass.com.Â  HUGE SPOILERS HERE, THINK BEFORE YOU CLICK!