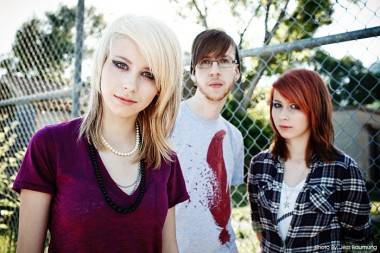 Toronto band Courage My Love. They’re new song “I Sell Comics” should be the theme for the upcoming Comic-Con in San Diego.

Last week we caught a video byÂ Courage My Love. The video is for a song called “I Sell Comics” and you can see it here:

It turns out the lyrics were actually written by Walt Flanagan, who manages Kevin Smith‘s New Jersey comic shop Jay and Silent Bob’s Secret Stash. Flanagan does a “smodcast” called Tell ‘Em Steve-Dave with a couple of other guys and they asked for listeners to put together some music to go with the words. Courage My Love, who are big fans of the smodcast – which has also played the young Kitchener/TorontoÂ band’s tunes – wrote and recorded the song in a few days, then realized it needed a video.

We reached Courage My Love’s 17-year-old lead singer/guitarist Mercedes Arn-Horn, who is in the band along with her twin sister Phoenix (drums/vocals) and David Blake-Dickson (bass/vocals), to talk about the song, the video, and whether she’s ever actually set foot in a comic book store…

Shawn Conner: What are you guys getting up to this summer?

Mercedes Arn-Horn: This summer we were concentrating on lots of festivals. We’re probably going to be doing a little bit of touring with the EP that’s coming out. But then I’m also going to have some fun at beaches, waterparks, that kind of thing.

SC: Have you played the Vans Warped Tour yet?

MA-H: We actually played it on Friday. It was great. We’ve always wanted to play Vans Warped Tour. I’d never even been before. A lot of the bands we look up to have played it. It was sooo hot though, oh my gosh. I got to see Paramore and The Devil Wears Prada and of course A Day to Remember.

MA-H: Most interviews, when they ask, “What’s your style of music?” I always say, “If Paramour and A Day to Remember had a baby, it would be Courage My Love.”

SC: Do you and Phoenix come from a musical family?

MA-H: Actually no. My parents don’t really do music at all. I guess our generation in our family is pretty musical. My cousins are in a band. I think this generation was the generation when the musicality came out.

SC: And you guys just filmed a video for “I Sell Comics” last week?

MA-H: Yeah. We quickly recorded it one day in the studio. The next day we were like, “You know what, it might be fun to shoot a video for this too, in case it doesn’t make it onto the show [Tell ‘Em Steve-Dave] it would be fun to have a new video up on YouTube.” And the subject matter, it’s so easy to think of funny things you can do. There was so much footage we couldn’t use because the song is short.

SC: And have you ever set foot in a comic shop?

MA-H: [laughs] Yes I have, several times. I used to go all the time to a store in Toronto called the Silver Snail. I would probably spend hours and hours there, not just for the comics but also the action figures. I was playing with dragons and stuff instead of Barbies when I was little. So yes, it’s safe to say I have set foot in a comic store before.

MA-H: Well, I have always thought the Internet is a pretty formidable tool. As soon as you put up a website or a Myspace page you have a built-in fanbase. Someone somewhere is going to be listening to your songs. At first I thought it’s not that important, it’s just good to have it. But I’m glad we’ve spent a lot of time on our Twitter and website because it’s gotten us a lot of international fans.

SC: What’s next for Courage My Love?

MA-H: Once this EP is finally released we’ll have a bit of tour support and we’re planning on going across Canada hopefully, and maybe into the States too. The EP release is probably going to be early August. It’s been held back a lot. We’ve finished it, we’ve got the artwork and everything. I can’t really say why it’s being held back. But when it comes out I will let everyone know and we’ll have a good reason for it!