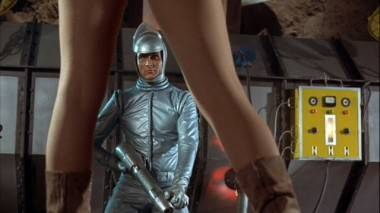 (Editor’s note: We’re re-posting Mr. Bougie’s piece from a couple of years back because a) it’s more relevant than ever during this, The Summer of the Comic Book Movie; and b), the UK’s Fab Press is publishing the third volume of Robin’s awesome Cinema Sewer book series in August. You can order it here and he’ll even do a personalized drawing on the inside cover.)

What with Hollywood’s apparent lack of ideas and recent history of recycling and adapting anything and everything that ever sold more than a dozen copies off the “Hey Kids, Comics!”-stand, you’re probably hungry for alternatives to all of those shitty comic book movies.

Yes, for every worthwhile effort, there are a dozen Ghost Riders, Catwomans, Howard the Ducks, and Superman IVs: The Quest for Peace. It’s enough to make one wonder if it’s even possible to use comics as a decent springboard for quality cinema.

Well, I’m here to tell you that it is, my friends. It is.

20. Persepolis (2007, France) – One of the most important animated films of the last few years was based on Marjane Satrapi‘s autobiographical comic book of the same name, and follows a young girl as she comes of age against the backdrop of the Iranian Revolution.

Created in black-and-white to mirror the style of the original graphic novel, the film drew serious complaints from the Iranian government and was banned in Lebanon – proof that Satrapi did this up right, y’all.

19. Mystery Men (1999, USA) -Â  An impressive comedic cast of William H. Macy, Ben Stiller, and Hank Azaria playing a trio of whack superheroes with totally unimpressive superpowers was a flippity flop upon it’s release – but has since developed a respectable cult following.

Loosely based on the beloved indie comic Flaming Carrot by the talented Bob Burden, and loaded with amazing cameos and supporting roles by the likes of Eddie Izzard, Tom Waits, and Dana Gould.

18. Sin City (2005, USA) – Possibly one of the most faithful adaptations in the history of comic-to-movie ever to come out of America. The only problem is, the comic the movie was based on wasn’t really anything but some weak-ass noir/potboiler eyecandy. Regardless of the pathetic adapted script, the creativity of director Robert Rodriguez slaps you upside the head, and the violence is delicious. Watch it while drunk.

17. Dragon Head (2003, Japan) – On a very rare occasion, a movie based on comic actually manages to add to a story by trimming and being fitted down into a two-hour theatrical blueprint instead of the usual narrative castration that takes place.

The original Minetaro Mochizuki manga for this post-apocalyptic drama about two teens wandering a destroyed Japan in a quest to survive is a 10-volume slog that seems to constantly reiterate and cover the same ground over and over again. Joji Iida’s live-action adaptation is much more lean, mean, and succinct in it’s depressive eye-gouging misery.

16. Iron Man (2008, USA) – Just when we were beginning to worry that it was impossible to make a Marvel comic superhero movie that didn’t suck, along comes Jon Favreau’s big-budget barn-burner based on the long-running comic of the same name. And how perfect was the casting of Robert Downey Jr. as Tony Stark – the alcoholic billionaire and gifted scientist/engineer? This almost made up for those goddamn X-Men movies.

15. Ichi the Killer (2001, Japan) -Â  Talent-packed Takashi Miike adapted this gore-thriller from Hideo Yamamoto‘s cult comic, in which a wimp transforms himself into a blood-caked rabid dog of a man whose power and strength is derived from memories of his boyhood humiliations.

14. Barbarella (1968 France/Italy) -Â  Jane Fonda brings Jean-Claude Forest’s amazing futuristic erotica to life in this campy non-explicit romp that takes place in the 40th century. Barbarella’s way-out adventures include discovering penetrative intercourse, seducing an angel named Pygar, and overloading a torture device called the Excessive Machine – which kills via sexual pleasure. Of course, a remake is in the works. Don’t worry, it’ll lack all the charm of the original and be totally worthless.

13. Akira (1988, Japan) -Â  Operating as the breathtaking introduction to modern Japanese animation for an entire generation of pop-culture nerds, Katsuhiro Otomo’s landmark film version of his own early ’80s manga series blew minds and opened eyes to the possibilities of what animated movies could be. Set in 2019’s “Neo-Tokyo”, the movie finds the basic settings and characters adapted from the original 2182-page epic, although the complicated plot differs quite a bit. I recommend that you immerse yourself in both.

12. A History of Violence (2005, USA) – Google “comic book movies” and look in on all the Internet chatter that you like, but I can tell you now that your average monosyllabic message boarding moron simply isn’t aware that this expertly told story about a mild-mannered man who becomes a local hero through an act of violence was based on a graphic novel. They’re too busy debating the merits of the CGI effects in the Hulk movies, which are frankly about as impressive as the graphics in the video games my nephews play.

Trailer – A History of Violence

11. Tekkonkinkreet (2006, Japan) – Taking its title from a pun on “tekkin konkurito” (the Japanese term for reinforced concrete), this gorgeous and colourful animated feature from the impressive Studio 4Â°C was adapted from Black and White, a three-volume manga series by Taiyo Matsumoto. Two street urchins (a tough boy named Black and an innocent, gleeful kid named White) end up taking on the Yakuza. Violent, touching and exquisitely rendered entertainment, this is the anime you bust out for that person who thinks all anime sucks.

10. Porco Rosso (1992, Japan) – Taking on a very brief life as a few watercoloured pages of comics in an animation magazine, Porco Rosso was adapted into one of Hayao Miyazaki‘s lesser appreciated, but still totally worthwhile films. The whimsical story revolves around a 1930s-era seaplane pilot who is cursed with the body of a anthropomorphic pig. Acting as a bounty hunter in the Adriatic Sea, he chases air pirates for money and longs for romance. Every minute of this sweet bippy feels like a Valentine’s Day card to the history of aviation.

9. American Splendor (2003, USA) – Welcome to the esoteric life and times of Harvey Pekar, a cranky file clerk from Cleveland whose cult-fave self-published comix used to get pimped back in the day on the David Letterman show.

Paul Giamati does a fantastic job of portraying Pekar, and even more eerie is how dead-on some of the supporting cast are at channeling underground comics legend Robert Crumb and Pekar’s friend Tobey Radloff. Pretty much a perfect movie about one of the most important autobiographical comics to ever come out of the underground.

8. Lone Wolf and Cub and its sequels (Japan, 1972/1973/1974) – Simply put, the greatest samurai cinema ever made by someone not named Kurasawa. Adapted from the manga by Kazuo Koike, this ongoing story of a one-man war waged by a Shogunate executioner and his infant son has intrigue and a legendary slowburn magnificence. Plus: A wooden baby cart that shoots knives and many splendid and exaggerated high-pressured geysers of blood.

7. Ghost World (2001, USA) – Two unsocial teenage girls spend their last awkward summer together after graduation and inadvertently end up infiltrating the life of a 40-something record collector. It seemed unlikely that Terry Zwigoff could properly bring Daniel Clowes‘ graphic novel of the same name to the big screen without losing something special along the way, which of course made it all the more pleasing when the project turned out as goddamn terrific as it did. A new Catcher In the Rye for a generation of irony-loving hipsters.

6. Lady Snowblood (1973, Japan) -Â  Adapted from a manga into this live-action feature film of the same name starring Meiko Kaji, the tale within this breathtaking exploitation movie begins when a woman named Sayo loses her husband and their son to a band of criminals who attack the family. Sayo is taken into slavery to be raped and beaten continuously, although when the opportunity arises, she stabs one of her tormentors and kills him – which results in her arrest.

After realizing she will be unable to avenge the death of her family, she seduces a guard in order to conceive a brat, and dies in childbirth. Vigorously trained for revenge her whole life, her daughter Yuki becomes a merciless killing machine, and learns how to use both her blade and her sexual appeal as a weapon. A must-see.

5. Oldboy (2003, Korea) – Great banana boner-yogurt, now this is how you do it!! A man spends ten years confined in a private prison, and has no idea why. His only form of entertainment is a TV set and his own delirium. Suddenly one day, his incarceration ends (again without explanation), and when he awakes he’s free to reclaim what’s left of his life. This intense, bare-knuckled urban thriller from Korea with a mega-crazy twist ending is adapted from a Japanese manga by Garon Tsuchiya and Nobuaki Minegishi.

4. Riki-Oh: The Story of Ricky (1991, Hong Kong) – Wow. Just, wow. Words struggle to do it justice, my friends. Riki-Oh: The Story of Ricky is so redonkulously over-the-top and desperate to entertain that your eyes nearly bleed as you struggle to take in the insanity. This is the kind of movie that staples your tits to the coffee table and rests its testicles on the bridge of your nose. The kind of movie you loan to your best pals and prospective girlfriends/boyfriends – and If they don’t care for it, you know that continuing to spend time with them is pointless. Go ahead rinkydinks, look it up on YouTube and see if I’m exaggerating.

Trailer – Riki-Oh: The Story of Ricky:

Diabolik is a superspy cat-burgler who has a really choice gaget-packed underground lair, a sweet sports car, and a foxy bitch named Eva who likes to roll around naked in a huge pile of his money. Based on one of the longest running Italian comics of all time, which was created by Angela and Luciana Giussani – two cool sisters from Milan.

2. Female Convict 71: Scorpion and its sequels (Japan, 1972/1973) – Female Convict 71: Scorpion is one of the best women-in-prison movies ever made, and among the best exploitation movies to ever come out of Japan. Not to overstate things, but I’d even go so far as to say that this quadroligy of movies stands as my favourite film series of all time. Meiko Kaji plays the stoic Scorpion, a woman who is betrayed by her gangster boyfriend and is sent to prison to suffer for his sins. This traumatizing experience hardens her in ways that must be seen to be believed.

1. Nausicaa of the Valley of the Wind (Japan, 1984) – The Citizen Kane of manga is lifted up to the screen with all of its beauty, wonder, and fantastic entertainment value intact. One of the true landmarks of animated cinema, Hayao Miyazaki‘s animated classic continues to move audiences 20 years after its release. In 1982, a comic about the warrior princess of a fictional valley appeared as a monthly serial in Animage magazine, and soon proved so popular that overwhelming demand cried out for a film adaptation – which Miyazaki created as he was working on the comic itself. Amazing.

Trailer – Nausicaa of the Valley of the Wind: