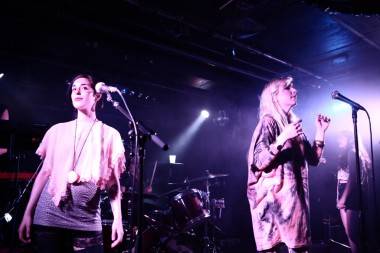 Review and photos–Austra at the Biltmore, Vancouver, July 21 2011

It was clear from the beginning that the audience, mostly female, was there to see the one band. But it shouldn’t have been a surprise. Toronto-based Austra have been generating a lot of buzz, from their Polaris Prize short list nomination for their debut Feel It Break, to gushing reviews in the press, and even a Twitter endorsement from Jay-Z.

Even so, the crowd was impressively massive, especially considering all the other shows (TV on the Radio, Thurston Moore and Cults) going on the same night. Sweaty and frenzied, the fans and the curious squished themselves up against all sides of the stage all the way back to the walls. I have never, in my dozens of shows at the Biltmore, seen such a full house of giddy fangirls.

But when the curtains opened, it was hard not to get caught up in the buzz. At center stage stood lead singer and songwriter, Katie Stelmanis, in alien leggings, an oversized sweatshirt, and sporting her signature long blonde locks. Petite brunette twins Romy and Sari Lightman of Tasseomancy (formerly Ghost Bees), one in sexy stockings and the other in shorts, both wide-eyed and smiling, flanked their blonde leader. 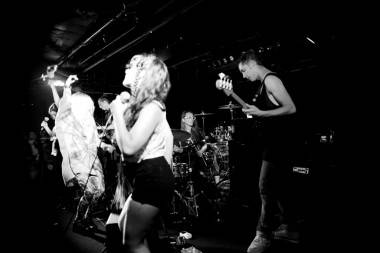 It was difficult to know what to expect from the show. Feel it Break – although great – is a little cold so it would be easy to presume that the band would be disconnected from their audienceÂ – stoic and standoffish like many electro acts. But this was definitely not the case.

An enchanting, ethereal sound emanated and Stelmanis took the mic. The twins began to sway seductively. Drummer Maya Postepski, bassist Dorian Wolf, and the synth player (no luck on Google) kept a low key profile at the back, but it didn’t matter what they did – all eyes were at the front of the stage. With arms raised, her face christened with glitter, Stelmanis began to pulsate as if channeling energy from the gods. It was absolutely delightful to watch.

Starting off with the hauntingly catchy “Darken Her Horse”, they segued into the hypnotic “Hate Crime” before jaunting into their latest single “Lose It”.Â Â There were brief moments of mic problems, but nothing that couldn’t be fixed. 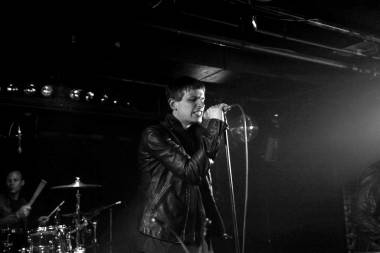 But it was Stelmanis’ distinct baritone voice – trained in classical opera – that stood out. The angelic harmonies of the twins, who danced along her side all night, made it all the more spine-chilling. That is, if you didn’t get caught up in the dancing.

Other highlights of the set included “The Choke”, “Habitat” (a new song with a sultry, trance-y feel) and the brooding electro-goth of “The Beat and the Pulse”. The latter sent the audience, as well as the band, into a rock-out frenzy before Austra finished up with the mesmerizing “Spellwork”.

The Biltmore cleared out immediately after Austra left the stage. I thought the crowds would come back for Cold Cave. They didn’t. As Cold Cave took their sweet time setting up, it felt like an hour had passed. By then the Biltmore was at half capacity – maybe even less.

It was well after midnight when, “BLAH BLAH BLAH NEW YORK!” was heard coming from the stage. Cold Cave’s brash entry was unexpected. However, nothing could prepare the audience for what was to follow – ear-piercing, deafening feedback. It was terrible and abrasive and it would pepper their set throughout the night. It was an obnoxious first impression, especially after the magical world of Austra. 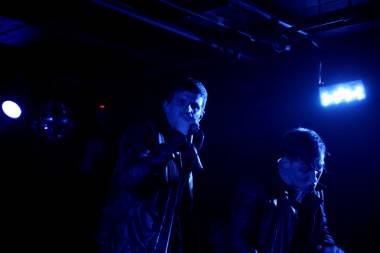 Once they got into a song, Cold Cave were intense. From the drunk girls grinding on the speakers, to the abrasive feedback, to the band’s aggressive dance moves – the performance was an assault on the senses. But it was hard not to be amused by the core duo of Wesley Eisold and Dominick Fernow, especially as the latter moshed around the stage as if high on speed. People either loved or hated them.

They started off their set with “Icons of Summer”, a track off their latest albumÂ Cherish the Light Years, which wasÂ steeped in ’80s new wave and Spandau Ballet-esque vocals.Â Then there was “Confetti”, a track reminiscent of long lost Cure. If you’re a sucker for ’80s new wave nostalgia, Cold Cave is your band.

As their set continued, it became clear that you don’t go to Cold Cave to watch the band; you go to dance. But Katie Stelmanis didn’t get the memo – she kept to herself amongst the abandoned tables.

One response to “Austra at the Biltmore Cabaret”