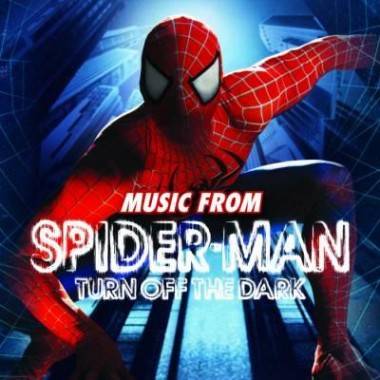 After months of derision and late-night talk show jokes at its expense, not to mention injury to some of the participants (including original director Julie Taymor’s ego), producers put Spider-Man Turn Off the Dark into dock and brought in new creative minds to cut the fat and make the storyline comprehensible.

One senses you don’t just tell Bono and The Edge, frontmen for the biggest-grossing touring band of last year, to go back and try again. However, the U2 songwriters apparently realized the music they’d written for their first Broadway effort could be, in a word, good, and apparently took time out from suntanning in St. Barts to write some hooks.

The result isn’t half-bad, although it’s easy to find dissenting opinions. (The Wicked-obsessed critic for Billboard, for instance, gleefully tears it apart.) Their songwriting tendencies are suited to the big, trumped-up emotional spectacle of Broadway showtunes: Bono already has a hero complex, and it could be argued that the band has been writing theme songs for a superheroes as far back as “I Will Follow” on their 1980 debut album Boy.

And this isn’t U2’s first venture into comic-book territory; they also wrote “Hold Me, Thrill Me, Kiss Me, Kill Me” for Batman Forever, and you can hear the epic strains of that song running throughout Music from Spider-Man Turn Off the Dark.

Naturally, the soundtrack has its share of breast-beating anthems, such as “Boy Fall from the Sky” and “Rise Above 1”, as well as a couple of mawkish ballads, including “If the World Should End” (which sounds like it could be the theme to a bad Roger Moore James Bond film) to reach the cheap seats.

More interesting is the lighter, weirder fare. “Picture This” and “Bouncing Off the Walls” are decent pop and rock songs, respectively – they don’t reach too high and they get the job done. The bad-guy-narrated “Pull the Trigger” and “Sinisterio” are silly but fun; “Freak Like Me”, a Village People-like singalong about New York City, is hilarious. (Likewise, the multi-cast “DIY World” might be a grower, but on the first few listens it’s just silly.)

Admittedly, this stuff is novelty U2, not prime U2 (which we haven’t heard in awhile anyway). And Reeve Carney, who plays Peter Parker and also has his own band (named Carney), brings little but angst to the songs; his voice is completely generic.

Music from Spider-Man Turn Off the Dark isn’t great but it’s not a complete cock-up, either. If anything, it’s whetted the appetite of this comic book fan/grudging U2 admirer for the Broadway play.

We have two copies of Music from Spider-Man Turn Off the Dark to give away. To enter: