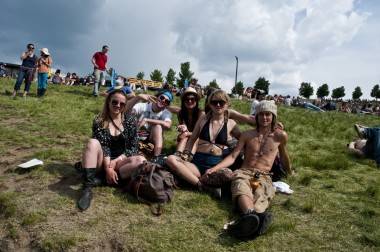 By the fourth day of a festival like Sasquatch! everyone is pretty well exhausted. The fact that anybody got up to dance at all was nothing short of miraculous, and there were a few band that had thousands up on their feet.

Chromeo played an epic set on the mainstage in the mid-afternoon. The dance party bled past the pit in front of the stage right into the upper reaches of the amphitheater. Some fans brought brightly-coloured pool toys, which were tossed up over the heads of the audience throughout the set. The Montreal duo seemed at once humbled and enthused at the response to their hour of electronic party-pop.

Guided By Voices played next, but Chromeo was a tough act to follow. The Dayton, Ohio band seemed to suffer a fairly serious generation gap problem. Frontman Robert Pollard looked like a haggard over-the-hill punk rocker as he sipped tequila and beer, and sang with a cigarette hanging out of his mouth. 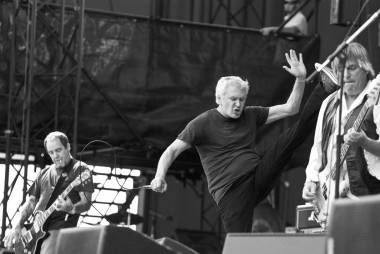 Robert Pollard performs one of his patented high kicks with Guided by Voices at Sasquatch!, May 30 2011. Jade Dempsey photo

A core group of fans, about four rows deep and maybe 10 across, rocked out at the front of the stage. They crowd-surfed sideways for lack of anywhere else to go. “Who saw that last shitty band?” the Pollard asked. Some young people heckled the band from the thinning crowd up on the lawn. With lyrics like, “Oh yeah, I’m going to drive my car / Oh yeah, I’m going to go real far,” can you really blame them?

Sharon Jones and the Dap Kings brought the party back to the mainstage in a hurry. Their upbeat funky soul music, Jones’ powerful voice and her sassy moves had the crowds streaming back in and dancing up a storm. A young fan named Patrick weaseled his way on stage and dance-battled with the singer. She sang to him, “If I give you my love, are you going to give it back?” Patrick had some great moves of his own, and if it wasn’t for the fact that the entire audience was already standing, the performance would have earned him a standing ovation.

Festival organizers should have put Foster the People on the mainstage, judging by the enormous crowd that packed into to any available space near the smaller stage where they played. Fans even climbed on top of buildings to get a closer look. The music had the crowd bumping well past their allotted set time.

Meanwhile, back at the mainstage, Rodrigo y Gabriela charmed a massive audience with nothing but the sounds of two guitars. A rainstorm hit part way through the set, and while some retreated to their umbrellas and rain jackets, many fans just danced harder as their clothes and bodies became drenched. The two-instrument performance easily topped that of bands four times their size.

The folk rock sound of The Decemberists isn’t known for being terribly upbeat, and yet the band brought a great deal of energy, humour and fun to their mainstage performance. They covered for some technical difficulties by having the guitarist, dressed in a Sasquatch suit, tells jokes and perform tricks. Once rectified, the sound was tight and very strong. Sara Watkins in particular wowed the crowed with her powerful vocals.

For many of the young-and-hip festival goers, the real Monday-night headliner was Major Lazer in the dance tent. He put on an insane, obscene and incredible party that had crowds pushing in from way beyond the boundaries of the tent for a glimpse and a listen. The set-up in the so-called “Banana Shack” made it very difficult for most of the audience to see anything happening on stage.

This is alright for most DJ sets, but an act like Major Lazer demands to be seen as well as heard. During the show Major Lazer stripped down to his boxers, gyrated, bounced around the stage, and mimed sex with the bra-clad women on stage with him. It was crazy. Crazy fun.

The crowd at Wilco’s closing mainstage set was noticeably thin, with many at the Major Lazer show and others already departed from the festival. The Chicago roots-rock band played a tight show, although they did a little too much of the jam-band thing. They’re really good at the jam-band thing, but the super-tired audience was really counting on them pumping out the hits in order to keep their energy up.

Sasquatch! was a wild ride. It had the big names, the hipsters’ favorites and the top party-makers. If you ever get a chance to go, just do it. 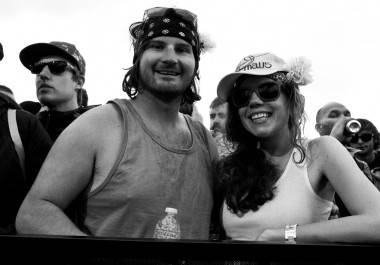