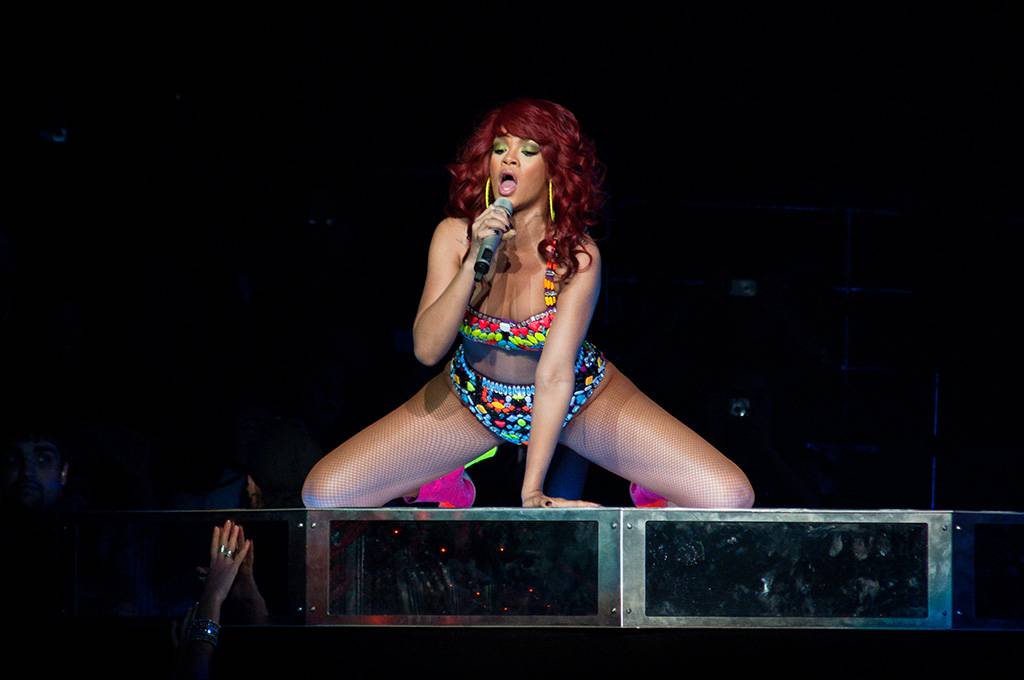 First off, let me be clear: I don’t listen to Top 40 dance music and feel indifferent towards it.

Secondly, I was very much in the minority at Rihanna’s concert at GM Place last night. It’s doubtful that I have ever been in a room with so many stiletto-wearing women in my entire life. I couldn’t help but wonder about spontaneous menstruation in this estro-heavy situation and paused to consider the potential for “mob mentality” in this now infamous arena.

Thirdly, I am not particularly swayed by Rihanna’s persona or music, neither of which appear (to me) to be vastly distinguishable from any other young, female Top 40 dance music sensation.

That being said I was genuinely curious about the show and was interested to see how this extraordinarily successful young woman might interpret her craft in a live setting. If there’s something there to appreciate then this was the best opportunity I could think of to learn. Unfortunately, this was not to be the case. 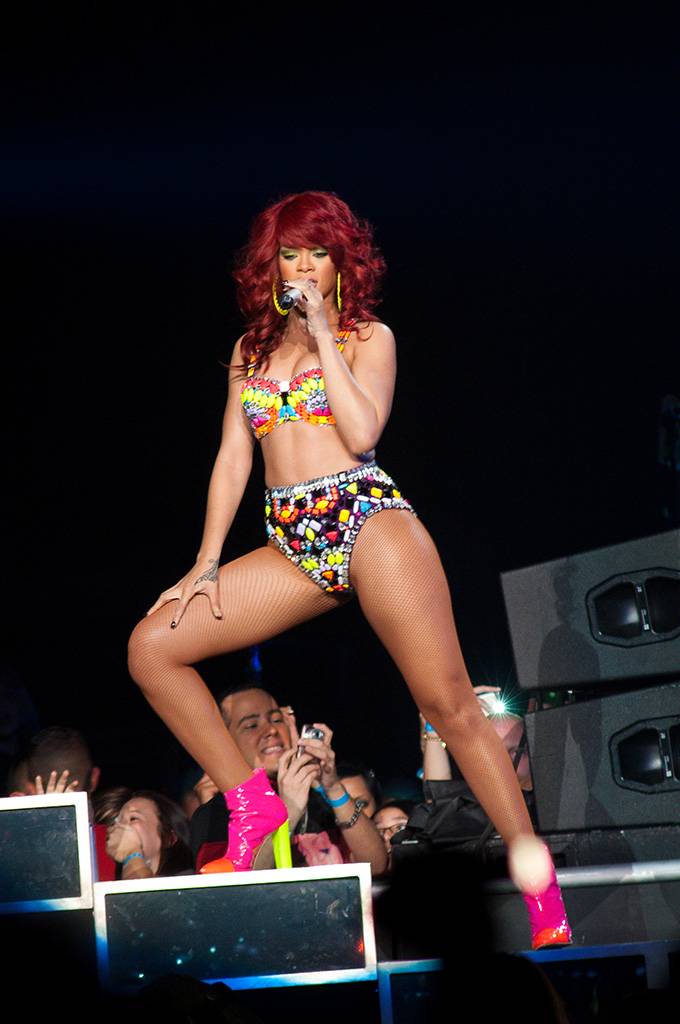 In keeping with the name “The Loud Tour”, the music was very much that – though it could also be called “The Bright Tour”. It was all very stimulating without being interesting. It was a carnival, but the lowbrow, midway kind; I half expected Rihanna to scream “You wanna go faster?”

The song “Shut Up and Drive” saw Rihanna, surrounded by dancers dressed like crash test dummies, perform air guitar on the hood of a heavily distressed old-timey car (think ZZ Top). In spite of all the “action” onstage I was quite bored. A show as technically elaborate as this leaves little room for non-scripted crowd engagement, the extent of which had Rihanna waving, encouraging the audience to get “loud!” and repeatedly shouting “Come on, Vancouver!”

The overall visual effect was evocative of tableau vivant except rather than being viewed for a moment, the lacklustre and uninspiring images drag on and on, song after song. There was no charm there. 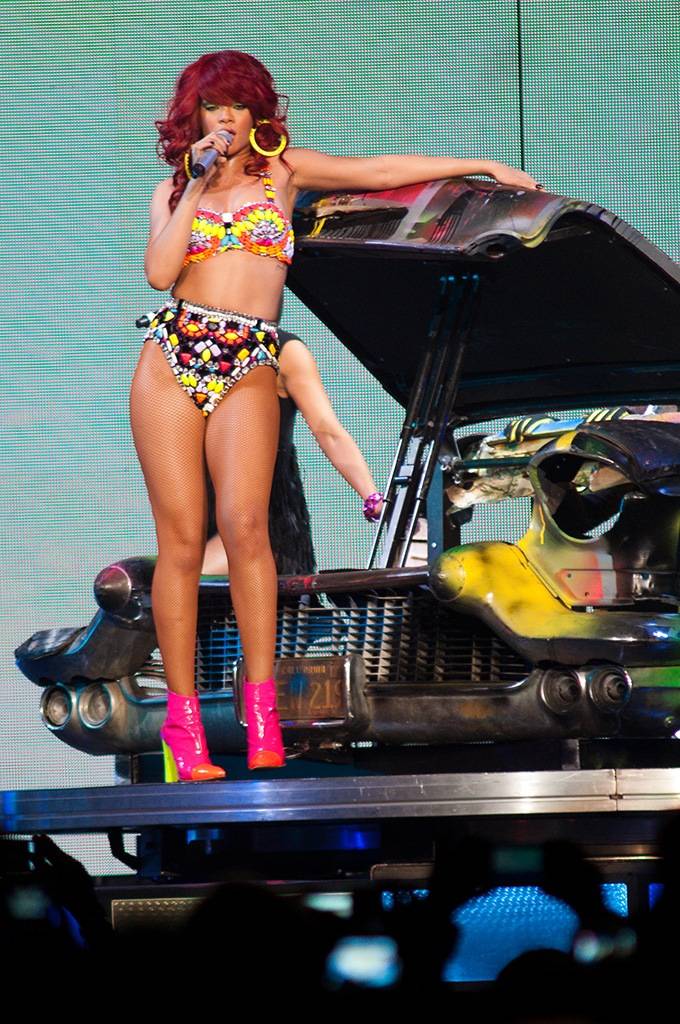 At another point, Rihanna wore a white one-piece bathing suit and frighteningly tall stilettos; she was on a bed and tied up with ropes held in place by her dancers. Hands reached up to maul her, and the overall effect recalled Linda Blair in The Exorcist but was far more sexual.

Rihanna’s constant gyration and the incredible amount of attention focused on her vaginal region (it’s pointed to, flashed, and touched… a lot) was, I think, supposed to make me feel “empowered”. But all that attention on her groin left me feeling weird and wondering what sort of tampons she uses or whether or not the show goes on hiatus when she is on her period (it’s a brave woman who’ll flash her vag to thousands of adoring fans while wearing a white bathing suit, night after night after night). 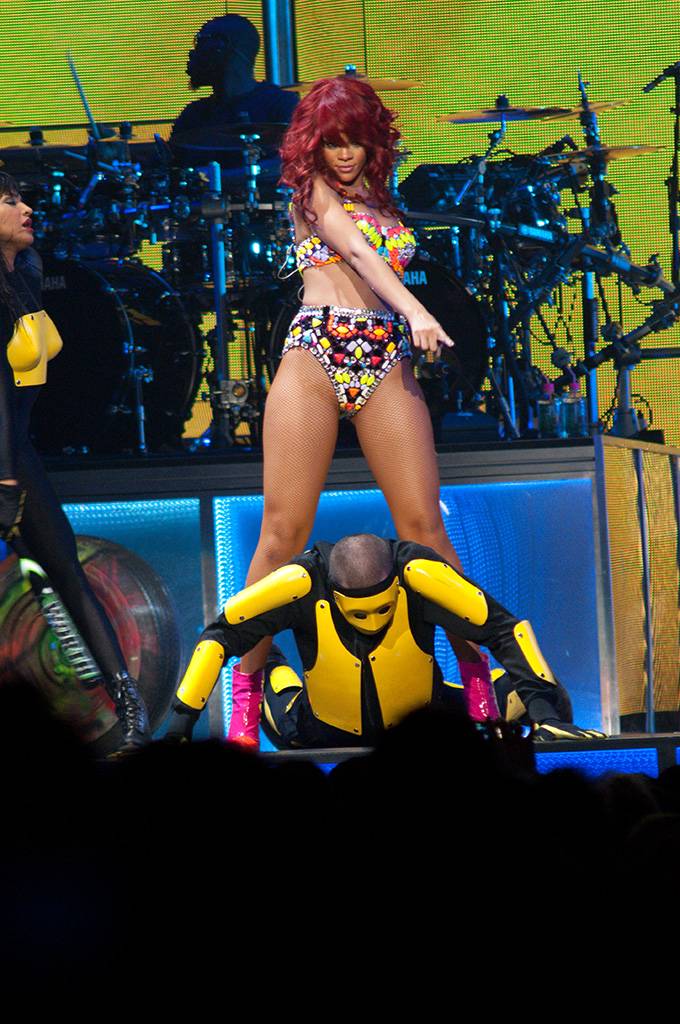 Everything on stage was highly sexualized without being remotely sexy or even sensual. It was as provocative as a bowl of pablum. At the end of the set, Rihanna dry-humped her “best friend from Barbados”,and feignedÂ  intercourse as the bed was eventually swallowed up by the stage. The egregiously long guitar solo that followed signified a costume change.

And so it went. A few costume changes later, Rihanna did celebratory laps around the arena floor to a Lil Wayne recording, and I was struck by the inorganic artifice of the spectacle. Rihanna was in full-on fighting mode but I can’t for the life of me figure out what she was fighting for. 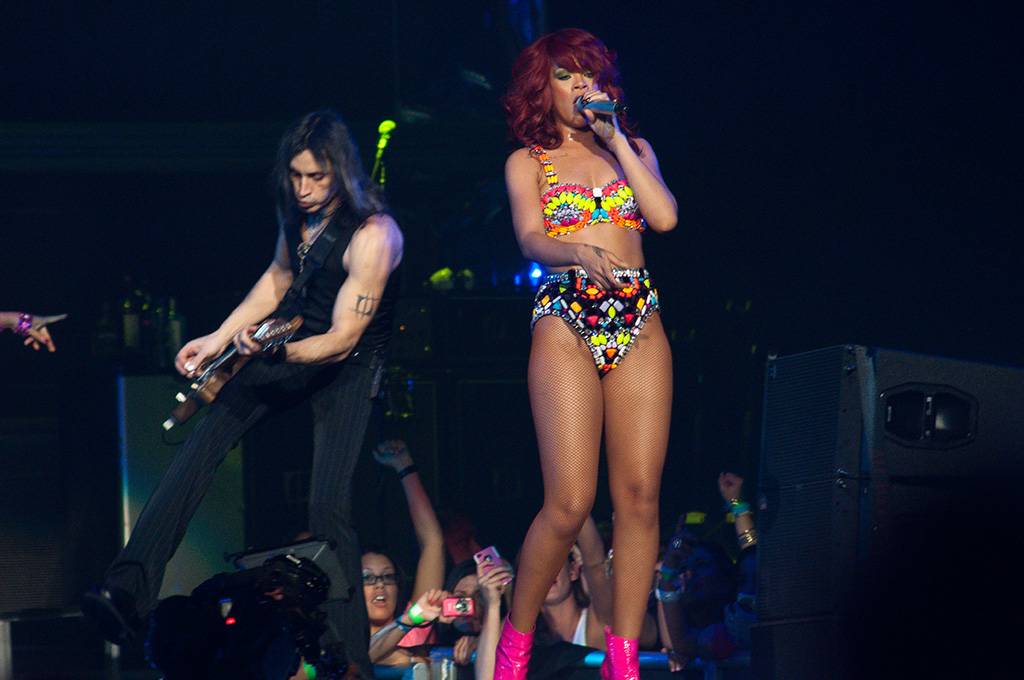 After far too many ballads the show drew to a close. During the encore, a glimmer of hopeful interest briefly flared as the opening arrangements for “Love the Way You Lie” and “Umbrella” differed somewhat from the overplayed recordings.

I suppose Rihanna should get “props” for actually singing (instead of lip-syncing) her way through the concert. Ultimately I was left feeling no more interested in her or her music as a result of the concert; when I was handed a sample of her new perfume while leaving it became clear I’ll never buy what she is selling.

One response to “Rihanna at Rogers Arena”