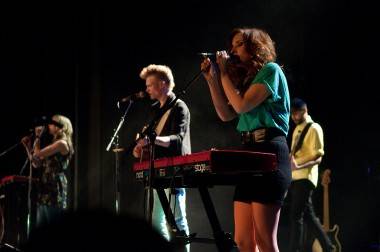 With the memory of Mother Mother‘sÂ  exceptional show at the Vogue still fresh in my mind, I jumped at the chance to speak with the band’s talented and profound frontman Ryan Guldemond.

The group started composing their signature melodic and punchy songs merely six years ago in their hometown of Quadra Island. The quintet now spends most of their time in Vancouver when not touring the rest of Canada, Western US, and beyond. The city has welcomed their new residents with open arms, and the band is definitely grateful for their enthusiastic fans.

While testing out my recording device, I could hear Guldemond tinkering on the piano, which only increased my eagerness to learn about his song-writing process and musical influences. As the conversation unfolded, I gained some insight into what inspired their signature harmonious sound, and how this has evolved into what we can hear in their latest LP Eureka. 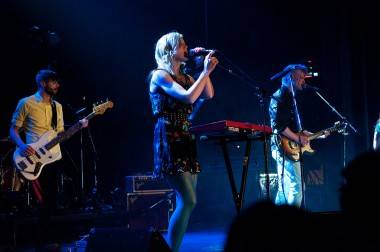 Ria Nevada: I was at your sold out show at the Vogue two weeks ago, and was absolutely blown away by the amount of hometown support you guys have. Not only did your huge fan base sing along to every song, but they were pretty damn pitch perfect.

Ryan Guldemond: Yeah, yeah. You know it’s really nice when they drown us out sometimes. You can kind of get away with some pitchiness you know?

RN: Brasstronaut also did a great job of warming the audience up for you guys, and I remember you saying at the show that they were the reason the night flourished. What was it like touring with such a great up and coming band?

RG: Well we never got on an extensive tour with them. We’ve done a whole three shows in total. We did two in Vancouver Island a couple of months ago, and that was our introduction. And we really fell in love with their music immediately. And they’re really fun and smart people as a bonus. We hope to tour with them. It means a lot to have a great band on the bill. It makes the whole package more intriguing and meaningful.

RN:Â Broken Social Scene, Damien Jurado, Lola Parks, RococodeÂ : I think it’s fantastic how people in this city really stand behind their talent. The most appreciative and loyal crowds I’ve ever seen were at your show and Dan Mangan‘s, also at the Vogue.

RN:Â Â So do you feel some extra pressure when you play Vancouver shows, or do you usually feel more relaxed playing here?

RG:Â Um, no I think they’re more difficult because I find that anonymity can be a bit of a luxury or portal into perpetuating those traits of ours that are more suppressed. Because you’re only given so many opportunities to be theatrical in life. But for people that know you, I mean you spend most of your time doing really normal things.

RN:Â Â So it’s too difficult to surprise them?

RG:Â Well, no, it’s too easy to surprise them, is I guess my point.Â  So you sometimes feel self-conscious about shocking those who know you with uh, flamboyancy and theatrics. But in actuality, no one cares.

And I think friends and family like to see those close to them, whom they support, take it by storm, and really amp up those personality traits. But on the other side, on the performing side, you can get in your head a little bit about it.

For the people that don’t know you, you can be anything you want. For them, they’re just taking it for what it is. 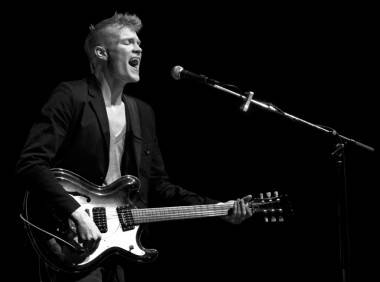 Ryan Guldemond with Mother Mother at the Centre in Vancouver for Performing Arts, Nov 9 2009. Photo by Sandra Minarik

RN: You guys are known for your incredibly catchy and infectious tunes. “Ball Cap” and “Ghosting” automatically get me in a good mood as soon as I listen to them. Is it a conscious decision to produce “feel good” records?

RG: Um, well, I don’t necessarily equate catchy to “feel good”, but I think it’s an ambition of ours to create melodically strong music and you know, what people leave with is the tune of things, you know. People don’t walk away singing the drum beat very often. I think it is our modus operandi to make really melodically potent music.

RN:Â I have to say, Mother Mother boasts some of the best vocal harmonies that I’ve heard from a rock band. Has that always been something you’ve focused on when composing songs?

Â Yeah totally. I mean when we first started, it was really stripped down, just me and the girls and an acoustic guitar. And so, that was the only thing to delve into, was those harmonies. And it was a lot of fun doing that. That’s where that signature trait was born, as a by product of the lack of instrumentation. We wanted to be a big sound, but there was only the three of us. There was no rhythm section, so harmonies were a good way to achieve that.

RN: Your voice and your sister Molly’s work very well together, in particular. I myself have 5 siblings and remember always being forced to sing together at family gatherings. Did you guys have the same experience growing up? Always being encouraged to perform together for your parents’ friends and relatives?

RG: [Laughs] No. No. That would be funny though! Yeah, it was kind of a surprise to each of us when we began collaborating on a musical level. She was always more of an artist and I was always the musician and those were our seemingly selected paths. So when she dropped the art thing and joined the band, or you know effectively started the band with me, um, I think it was a surprise to not only us but our family and friends as well.

RG:: Going back to the idea of “feel good” music. What songs or records, either your own or someone else’s, automatically put you in good spirits?

RG: Oh, see I like records that, it’s a funny thing. I like records that make me feel real, that give me a real sense of what’s going on around me. Or make me feel grounded and sort of in touch with the melancholy, in a clear and confident way. I don’t really like to feel too optimistic when listening to music. I just like to feel grounded and in touch with the melancholy of life.

RN: And what’s something you’ve been listening to lately that you can recommend us.

RG: I kind of like looking back at old records. I’m not so ambitious to discover current things. I go back to the music of my youth, or just music of an era past. I’ve been listening to the double album Fragile, by Nine Inch Nails these days. And that’s a really angst, very beautiful but tender at the same time. It get’s me in a good space and makes me feel in touch, again, with those emotions, dark or bright.

RN: And on your latest release, Eureka, fans can hear a stronger electronic influence, especially on tracks like “The Stand”, “Baby Don’t Dance” and “Aspiring Fires”. And we’ve heard this shift with artists like Sufjan Stevens and Of Montreal as well. What motivated this progression of your sound?

RG: We, well, in an attempt to emulate much of the rich sound on “O My Heart”, we employed the keyboard and the synth on that record. I think that was really the catalyst for the more electronic sounds on Eureka. Just becoming a band with those colors. Um, we really wanted to exploit that, push the limits and see where that went.

You know it’s important to us that everybody had an actual voice in each song. And the girls really diversified as a by product. They were mostly singing, but now they’re sing mostly and playing keyboards, so they’ve got a lot going on.

RN: Well it’s definitely a more lush and layered sound and I think everyone’s really happy with the direction you’ve moved towards. And we can’t wait to see what’s next from you guys. Thank you so much for speaking with us today, Ryan!

RG: No problem, thanks for talking.