– Today, Green Lantern went from a “maybe” to a “hell yes.” A new theatrical trailer debuted with all the sci-fi goodness they have unexpectedly embraced in the final weeks of promoting the Ryan Reynolds-starring movie. Plus, an alien voiced by Michael Clarke Duncan punches Reynolds in the face. Fan service has not gone out of style. The trailer is up now in glorious Quicktime HD.

Look! There’s a girl in the Green Lantern movie. How’d that happen?

– The script for Joss Whedon’s hotly anticipated and awkwardly titled team-up flick Marvel’s The Avengers has been leaked. Samuel L. Jackson’s script (so identified because it’s the one that says “Bad Motherfucker” on it, and also his name) was stolen by someone unclear on the concept of felony sale of stolen goods. The would-be spoiler fence offered the script to media outlets, and only a few posted pictures of select pages that proved authenticity. There was some debunked rumblings that the leak might result in a delay for the production, but those rumors likely didn’t take into account the millions of dollars per day it would take to stop a production this vast. The leaked pages confirmed that The Avengers are in this movie.

– SuperHeroHype is detailing some developments on the rebooted Amazing Spider-Man that has left us with a good shot of Andrew Garfield as Peter Parker and new fuel to villain rumours. New spy and set photos detail a skateboard toting Parker walking into an Oscorp building, looking like a big nerd. In other words, they nailed it. Also, a picture of an Elephant Man looking dude surfaced, with some speculating that the garb was being used to hide extensive make-up from paparazzi. The deformed-by-science Lizard is rumoured to be the villain in The Amazing Spider-Man, and extensive make-up would support that thesis. Or the guy is just cold and bundling up. That would be embarrassing. 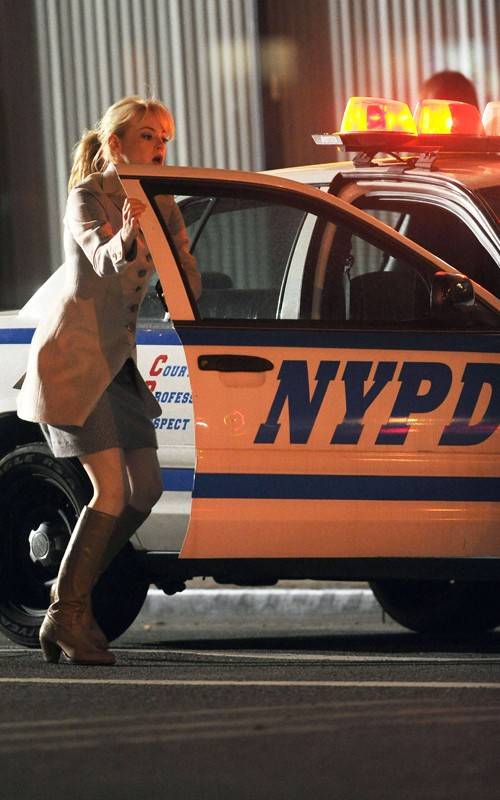 Emma Stone as Gwen Stacey in The Amazing Spider-Man.