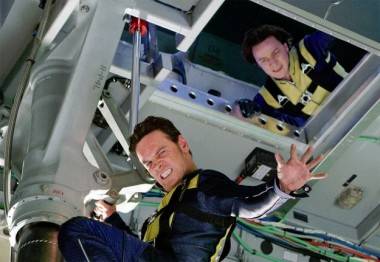 With the release of Scream 4, we are officially into blockbuster season. To celebrate, here are all the rumors and news fit to print about upcoming comic book movies:

– 20th Century FOX has released new pictures from the upcoming X-Men: First Class, one of which depicts a very constipated-looking Magneto (Michael Fassbender) to go along with the release of the second international trailer.

– Demonstrating the true desperation geeks feel about these kinds of details, it was big news that Zack Snyder’s Krypton will not look like a bunch of crystals and junk. Talking about the newly unveiled plans of the Henry Cavill-starring Man of Steel to include the Superman origin story (again), a source told Latino Review that Krypton, Superman’s home planet, will probably look a lot like Coruscant, the city-planet from Star Wars. Aping Star Wars worked for J.J. Abrams and his Star Trek reboot, so I can’t see why Snyder wouldn’t do the same.

– Ryan Gosling was briefly rumoured to be in talks to star opposite Johnny Depp’s Tonto as the Lone Ranger, but a curt statement from his team implied he had dropped out of contention for the role. Disney is rebooting the series with favorite son Gore Verbinski (Rango, The Weatherman, Pirates of the Carribean) with Justin Haythe (The Clearing, Revolutionary Road) writing the screenplay. The movie [which no one, last we checked, is waiting for. -Ed.] is scheduled for release in 2014.

– Writer Christopher Markus had loose lips around MTV and let slip that the people behind Captain America: The First Avenger are thinking about going period again with Captain America 2. Arguing that Joss Whedon’s Avengers film will tell the story of a modern Captain America, he says “there’s going to be a lot of his World War II history we haven’t shown.” I suppose this would shield them from having to follow whatever Whedon does to their character. He has a reputation of killing characters, so maybe that’s not such a bad thing.

– Actually newsworthy: the latest trailer for Cowboys & Aliens does not suck. In fact, for being basically a retread of already seen footage, it makes the summer movie look markedly more badass than the first trailer did.

– Seemingly giving up on ever adapting Neil Gaiman’s Sandman comics series, HBO is now developing a mini-series based on the novelist/comic-book writer/lyricis/Amanda Palmer boytoy’s American Gods. Tom Hanks’s production company Playtone has incited them to attempt to aquire the rights to the novel, and has attached acclaimed cinematographer Robert Richardson (Shutter Island, Kill Bill) to write the script with Gaiman himself. Hanks and Playtone were also the force behind HBO hits Big Love, Band of Brothers and John Adams.

– Dashing rumors that he might play the son of Ra’s al Ghul, Joker, Riddler or some Akira-like blob amalgamation of all of those, Warner Brothers and director Christopher Nolan confirmed that Joseph Gordon-Levitt will play a Gotham City police officer in The Dark Knight Rises. Also announced was the casting in the new Batman movie of the third Inception (Nolan’s previous enterprise) alumn, Marion Cotillard. Gordon-Levitt will play John Blake, a cop assigned to what we may assume is the Major Crimes Unit under Gary Oldman’s Commissioner Gordon, and Cotillard will play a Wayne Enterprises employee named Miranda Tate. 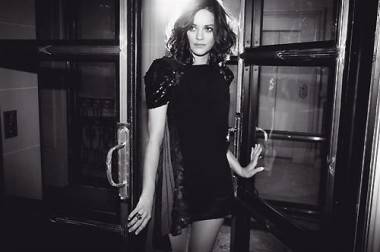 – The Old Spice Guy (Isaiah Mustafa) is trying realy hard to star in a Luke Cage movie*, he reveals in an exclusive interview with SuperHeroHype. Look at that henchman, now back to me, now back to him, now back to me, he is now flying through the air because I punched him in the chest. The henchman is now tickets to that thing you love.

*A second if not third-tier Marvel Comics superhero also known as Powerman. He and martial arts hero Iron Fist shared a comic book title in the ’70s. It was not good.