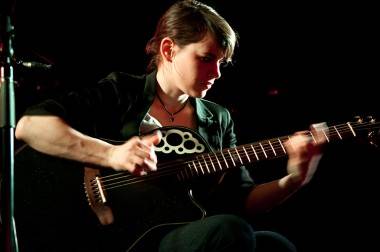 Not often will a musician be so aware of crowd dynamics and sightlines that she asks the entire dance floor to asseyez-vous s’il vous plait; but a ballsy and admiringly brash Kaki King did just that on Saturday night at the Biltmore Cabaret during what she has branded her “Guitar Traveling Freak Show”.

A truly mixed crowd, spanning the spectrum from hardcore guitar nerds to elderly easy-listening fans to late-night hipster DJ party kids, willingly complied with Kaki’s wishes. All good-naturedly reposed to take in a 90-minute set chock full of virtuosic finger-style guitar and a vast array of exotic instruments, each freakier than the last. 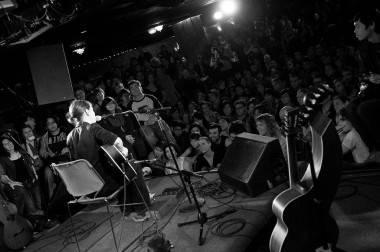 A student of the acoustic heavy wood genre, King is well versed in the history of the art form. For her solo acoustic set she borrowed songs from Michael Hedges and Andrew York, yet issued a humble disclaimer for her skill compared to these greats. She did not disappoint (well, unless you were one of the mislead indie rockers expecting a full band and a complete rundown of all the songs from Until We Felt Red, her third album). Despite suffering the tail end of what sounded like a pretty severe head cold, Kaki did manage to croon a couple numbers to the delight of her swooning fangrrls (and boys). Singing, she gladly confessed, is not her primary talent, which is more than excusable considering her goddess-like grasp of the guitar and all the range of acoustic sounds she’s capable of producing.

For this tour Team Kaki consists of King plus soundman and trumpet player Dan Brantigan, as well as one of the hardest working guitar techs I’ve ever seen, Anna Morsett. With a guitar change and/or tuning for pretty much every song of the night, Morsett was kept busy tuning, running and presenting her boss with a new guitar, each more exotic, beautiful or just straight-up weirder than the last. Guitar-porn highlights of the night included a “prepared” guitar featuring an artificial bridge made out of a cabinet handle; a vintage Weisenborn; a “Dojo” or dobro-banjo; an Andrew White 7 string classical with fanned frets; and a “harp” guitar, described by King as a “conjoined twin, tumorous and stupid.” This freakish Elephant Man of an instrument provoked gasps of disgust and admiration from all the guitar nerds in the house. 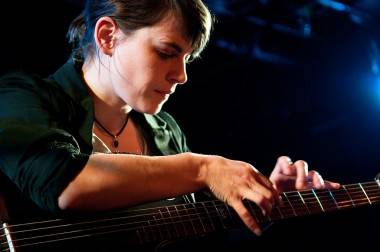 One note of disappointment was the trio of Canucks fans on a post-win high following Saturday’s game, who very vocally expressed their distaste for King’s show. No, the Biltmore was not a logical choice for a raucous night out (What, was the Roxy not open yet?). In the future, hockey fans – please remember not everyone cares about how well grown men can chase a rubber puck around a frozen swimming pool and do not disrespect a serious musician and her audience with your boorish banter. Luckily these loud-mouthed jocks got bored and left halfway through Kaki’s set. Perhaps her immaculate cover of Fences’ “My Girl The Horse” was not to their liking?

Another aspect of note was King taking a pre-show song request over Twitter from one of her 9,000 followers. She appears to be quite the social media vixen, which perhaps accounts for the packed house for this show. With one acrylic-nailed hand on the pulse of modern music and the other on her smart-phone, it’s safe to say Kaki King is primed to become one of this generation’s next independent music superwomen.