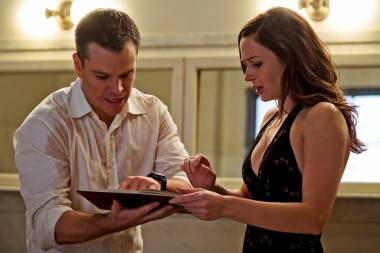 TenÂ films based on the writings of Philip K. Dick

Friday sees the arrival, almost 29 years to the day after his March 2 1982 death, of yet another film based on Dick’s work, The Adjustment Bureau, based on his short story, “Adjustment Team”. The film, called “an enjoyable piece of hokum” by Entertainment Weekly‘s Owen Gleiberman,Â would seem to have much going for it, not the least of which are its stars: two of the best right now, Matt Damon and Emily Blunt. The marketing team behind the film seems to be pitching this as a thriller, though a 21st-century Hitchcock angle seems more appropriate: a man on the run from forces on all sides. The film plays on the rather trendy theme of destiny, as in, will our hero accept his destiny, or strive for something more? The “something more” being Blunt.

8. Confessions d’unÂ Barjo (1992, based on the 1975 novel Confessions of a Crap Artist) -Â Even the French have taken a crack at Dick’s work. Barjo, which translates loosely as “crap artist”, sees a crap artist move in with his twin sister and her husband, Charles, who has trouble relating to either of these two. (Dick was a twin himself. His twin sister Jane died six weeks after their birth, something he struggled with the rest of his life.)

7. Screamers (1995, based on the 1953 short story “Second Variety”) – Peter Weller stars as Colonel Hendricksson, who headsÂ up a small group of soldiers set on establishing peace in a seemingly never-ending conflict.

5. Minority Report (2002, based on the 1956 short story “The Minority Report”) – A match made in sci-fi heaven, Steven Spielberg meets PKDÂ in this story of a future where criminals can be caught before they commit their atrocities.

3. A Scanner Darkly (2006, based on the 1977 novel)Â – Richard Linklater’s wonderful filmed-then-animated tale of a cop who becomes dangerously involved in a new drug.

1. Radio Free Albemuth (2010, based on the 1985 novel ) – I know absolutely nothing about this film other than thatÂ Alanis Morrissette is in it. The official synopsis lists it as a political-mystical-comic tour de force, about a record store clerk who sees strange visions, and soon finds himself a successful record company executive (in 1974 Dick claimed to have experienced intense visions that sent a pinkish beam of light directly into his consciousness – he did not however become a record company executive after this experience).