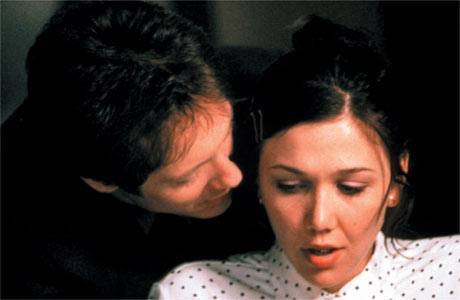 10. Annie Hall -Â Through all the awkward, hilarious, and neurotic (what were you expecting?) moments Alvy (Woody Allen) and Annie (Diane Keaton) have in their rollercoaster of a relationship, they still manage to have occasional glimpses of total tenderness. No, we can’t all speak shellfish and yes, sometimes you do need to call your ex-boyfriend in the middle of the night to kill (or not) a spider the size of a Buick. If you can’t remember the mantra of how much you love this movie, call your analyst and maybe she can remind you. 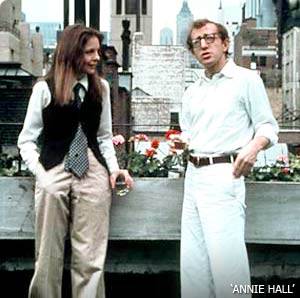 9. Truly, Madly, Deeply -Â Love beyond the grave. Alan Rickman’s voice alone would be hard enough to let go of, let alone the rest of him.Â See also: Always (the ghost of Richard Dreyfuss with a grieving Holly Hunter dancing – heartbreaking and breathtaking), Made in Heaven (Timothy Hutton, please come back. You’re not even dead).

8. The Way We Were -Â What she said: “Your girl is lovely, Hubble.”Â What she should have said: “Your girl is lovely, Hubble. Sure, she’s a stick insect with zero personality and she has absolutely nothing to say, although I’m sure she plays the cello very well, looks gorgeous in a turtleneck, has fantastic penmanship and a cute smile. I’m sure you’ll be very happy together.” 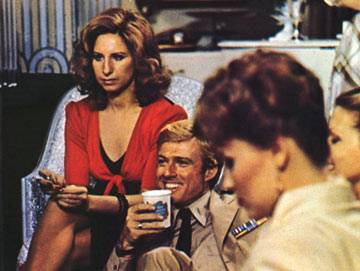 7. A Room with a View -Â Underneath all those oppressive corsets and puffy Gibson-girl hairdos are layers of petticoats and repressed emotions, as Miss Lucy Honeychurch (Helena Bonham-Carter) navigates the turbulent waters of desire for George (Julian Sands) in spite of her engagement to Cecil (Daniel Day-Lewis). Victorian formality complicates but does not manage to impede this delightful tale of impossible attraction burdened by perceived protocol, a maze of charming manipulations inspired by love’s undoing. And really, who doesn’t enjoy a ribald bodice-ripper?

6.Â The Goodbye Girl, The Apartment (tie) -Â Sometimes, you need more than a man – you need a real mensch.

5. Say Anything -Â The only thing keeping this from placing higher is my deeply held feeling that the film falls apart in the third act.

Apart from that, Lloyd Dobler is a legend. I love him. I love him so much I invented a desert – Lloyd Cobbler. I will defer to Chuck Klosterman by saying that John Cusack’s iconic portrayal of a young man who does not want to be associated with anything “sold, processed or bought” has undoubtedly ruined a generation of females, who are frustrated by a “world full of guys” and not men. I concede that if a man wearing a trench coat and a Clash shirt held up a ghetto blaster (iPod?) whilst blasting Peter Gabriel’s “In Your Eyes” beneath my window I would be compelled to call the cops (or alternately be totally, like, thrilled and run down to meet him in the backseat his Chevy Malibu). ThatÂ  said, there will always be a place in my heart for Lloyd, who “shakes because he’s happy” and believes “kickboxing is the sport of the future” (UFC is kind of the same thing, right?). 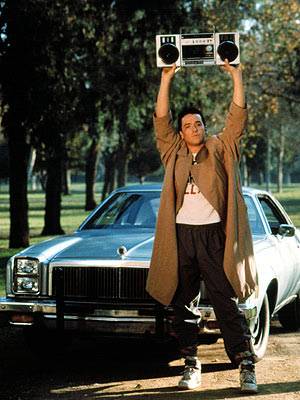 4. AmÃ©lie –Â Audrey Tatou is deliciously adorable as the title character in a film painted in a mesmerizing rainbow, colourfully broad brushstrokes shaded in glittery hues of romantic notions. Amelie Poulain’s optimistic and charming nature negates the need for fate, as seemingly everything in her life is brought about by random acts of manipulation (perhaps even stalking or felonious interference), giving hope to crazed good Samaritans everywhere. If the story and scenery don’t grab your heart, Yann Tiersen’s delightful score will. And if they don’t, it probably means you don’t have one.

3. Eternal Sunshine of the Spotless Mind -Â “Meet me in Montauk.”Â In what may be the best performances of their careers, Jim Carey and Kate Winslet are an unlikely couple on an even more unlikely journey to completely eradicate their memories of each other after their relationship dissolves. At the heart of the bizarrely imaginative, amusing, and crazed journey is an utterly believable dynamic borne of their honest portrayal. The way that they engage, from Frank and Estelle Costanza-esque bickering to moments of quiet and subtle tenderness, their relationship is profoundly whole in its perfect imperfection. Under any and every circumstance, their lives are markedly better when the other is in it.

2. Before Sunrise/After Sunset –Â Yes, technically these are two films, but they really need to be seen together to be appreciated. Before Sunrise was something of a rare gem when it was released, a cult favorite that has managed to shine brighter with the release of the charming, lovely, and oh-so-romantic sequel After Sunset, which catches up with the 24-hour lovers (Ethan Hawke, Julie Delpy) ten years later. This film is for the hopelessly hopeful romantic, the one who ponders the imaginary roads of flitting past-perfect encounters, wondering and wandering the stories of the mind in a town called What If. The two are rife with magical little moments, stolen glances and more than an ounce of dialogue culminating in, perhaps, one of the best movie cliffhangers ever – romantic or otherwise. 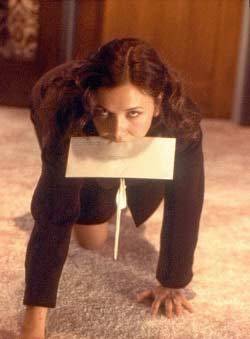