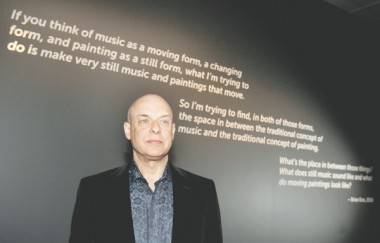 Brian Eno for the Calgary Herald. Photo by Dean Bicknell

After 500 years of control are we ready to dignify surrender?

This was the question we left asking ourselves after two solid hours of listening to the life of Brian Eno. We’ve dignified control for so long, he explains, that people enjoy theÂ experience of surrendering to something.Â Sex, drugs, religion, or art. In all these situations, we willingly lose control. Apparently, this is how people react to the visionary producer’s art as well.

Marking the launch of Vancouver Art Gallery’s Culture Series, the British Renaissance man was in town to give a one-of-a-kind lecture to a sold out Vogue Theatre. The crowd – a mix of Vancouver’s old, wise, intellectual and curious – was there because somewhere, somehow the man’s career had touched our lives. 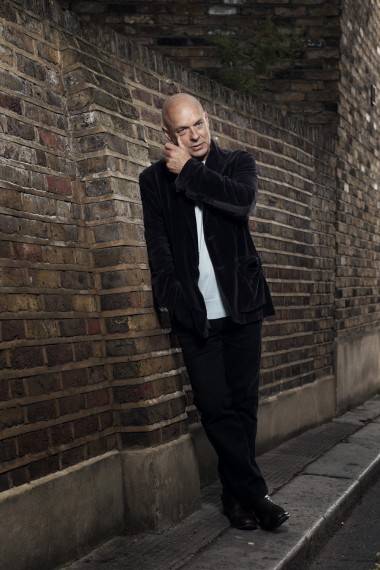 Fittingly armed with an overhead projector on a naked stage, Eno introduced us to various schools of thought that influenced his worldview and ultimately inspired his life’s work.

If you think it sounds academic, it was.

Spontaneous in nature, he warned us that his lecture was going to be different than what he had just offered in Calgary. “We’re not Calgary!” one person heckled. “Point taken” smirked Eno. This would be a “history of western culture, with me as the inevitable outcome.” He laughed. No music, no art, just Brian Eno on stage. Sure, there was the occasional diagram, and it wasn’t unlike a university lecture, but it was nevertheless enjoyable.

The first half of the talk involved paradigm shifts – the breakdown of three schools of thought. Effectively, we’re not the centre of the universe anymore, we’re not the only species anymore, and we no longer assume top-down organization.

But perhaps most fascinating was his demonstrations of complexity theory, that counter to our expectations, complex things can, and do, come from simple things.Â This brought us into the latter half of the night that explained Eno’s appreciation for creating atmospheric paintings – sonically and visually.

Terry Riley’s “In C”, for example was described as Eno’s life-changing music, that something so seemingly simple – 53 bars of music in the key of C, all performed at the same tempo, only the musicians can choose how many times they play bar 1 before moving onto bar 2 – can produce a complex piece of music. I was immediately reminded of a similar concept at www.inbflat.net, which is brilliant.

Eno discussed many thought-provoking ideas. “We’re stuck with a language problem” he explained. If we understand that theatre and cinema are intrinsically linked and yet decisively two different art forms, why do we still call recorded music, “music”? But not everyone else felt the same enthusiasm for the talk. As one individual Tweeted that night, “Why would someone pay to hear Brian Eno speak? I want to hear him play, not talk. Would be like paying to see Lou Reed make an omelet.”

I don’t know. As somebody who had a life-changing experience listening to Achtung Baby as a 12-year-old girl, I left the theatre satisfied for having a better understanding and appreciation for a complex man who, perhaps, is a lot more simpler than we give him credit for.