It’s no High Fidelity or The Queen, but director Stephen Frears’ latest effort, Tamara Drewe is still better than a kick in the head (note: that is indeed a clever-ish reference to the end of the movie, but you’ll just have to watch it to find out).

Based on Posy Simmonds‘ UK comic strip, which in turn is based on Thomas Hardy’s novel Far From the Madding Crowd, the film is funny in that sly British sort of way. Indeed, if you are looking to forget your own problems for approximately one hour and forty-seven minutes and laugh at the misfortunes of the film’s characters instead, then this flick is for you. 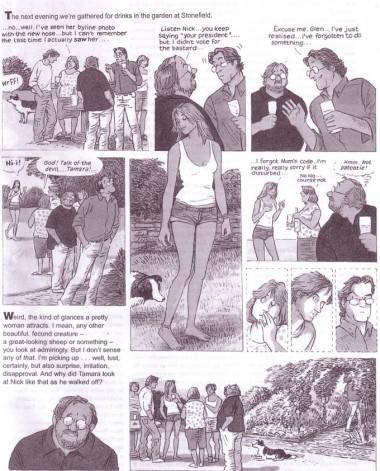 In art as in life, it doesn’t take much to turn men into drooling mop-heads. An early scene from Posy Simmonds’ comic strip Tamara Drewe.

The lead character, Tamara Drewe, is played by former Bond girl Gemma Arterton, and boy does she rock her curves – Tamara’s charms do not go unnoticed by basically every male she encounters, and naturally this leads to all kinds of woe. But it’s a funny/dramatic kind of woe, so that makes it all quite amusing to watch.

Still, Tamara cannot drive the plot alone. In fact, most of what we know of her is via everyone else’s perceptions and observations, versus any real development of her character. She is not a person in her own right, really – she is both everything and nothing all at once: a catalyst, a convenient rebound, an ugly duckling turned swan, a fly in the ointment, a life-long fantasy, and/or a pretty thing to help others feel young again.

One scene captures the “blank slate” nature of Tamara’s character perfectly. She has just arrived in her little hometown village to take care of the sale of her diseased mother’s country estate. She is not really an outsider, having grown up in the area, but she is no longer the big-nosed, awkward girl that everyone in the small town remembers. Climbing over the fence that separates her estate from a nearby writers’ retreat, she makes quite the splash with the literary group in a pair of short jean shorts. 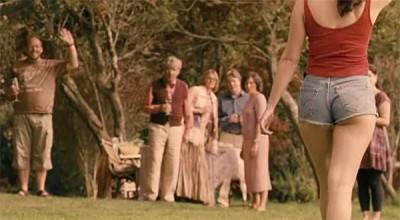 Gemma Arterton makes her entrance as Tamara Drewe, a new movie based on a graphic novel by Posy Simmonds.

It’s not her successful journalism career in London that impresses folks, or anything that she says or does at all in the scene. Instead, what really steals the show is the fact that her shorts barely cover her butt-cheeks. Indeed, the way everyone reacts to her new look is quite telling: the local literary “star,” Nicholas Hardiment (played to arrogant perfection by Roger Allam) doesn’t recognize her, despite having been her neighbour for years. Along with the rest of the men in the group, he simply stands there and drools. The women in the group are more pragmatic; one of her old schoolmates compliments her new “hooter” (nose), while Nicholas’s wife, Beth (Tamsin Grieg) whispers that she finds Tamara’s shorts “a bit annoying.”

In this way, Tamara is actually a fairly realistic character, since pretty young things are hardly ever given credit for being individuals in their own right. It would be tempting to call the film a tad sexist for failing to fully develop the female lead character, but a few of other female characters make up for that. For example, Nicholas’s wife Beth gives us a genuinely heart-wrenching look inside the mind and heart of a woman who is married to a chronic philanderer. Her character’s grief gives this film a little bit of much-needed substance.

But what saves this film from becoming a standard, albeit slightly off-beat, romantic comedy are the secondary characters, namely the two bored teenage local girls who manage to get into the everyone’s business. One of the girls, Jody Long (played with amazing adolescent malice by Jessica Barden) is so obsessed with fictional indie rock star/teen heartthrob (and eventual lover of Tamara Drewe, of course) Ben Sergeant (Dominic Cooper, wearing guy-liner) that she will stop at nothing to meet him, including breaking into people’s houses and hacking into their personal email. 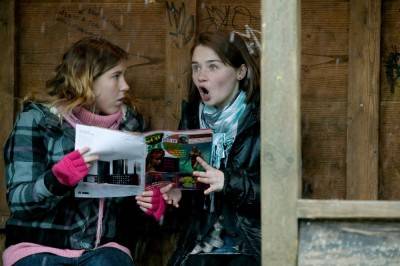 Jody is the girl we imagine Tamara might have been, if only she had not been burdened with ugliness as a girl, and then burdened with beauty as an adult. Jody is a girl of action: she gets things done, versus just being done like Tamara, or being done-to the way Beth is victimized by her husband. In a sense, Jody is the under-the-radar heroine of the film, and the reason why the adults are all forced to face their respective demons.

Overall, Tamara Drewe, like the character herself, is pretty to look at and witty, but lacking in any real depth. Still, I recommend it to those who want to feel better about their own messed up love lives… which, let’s be honest, is almost everyone.