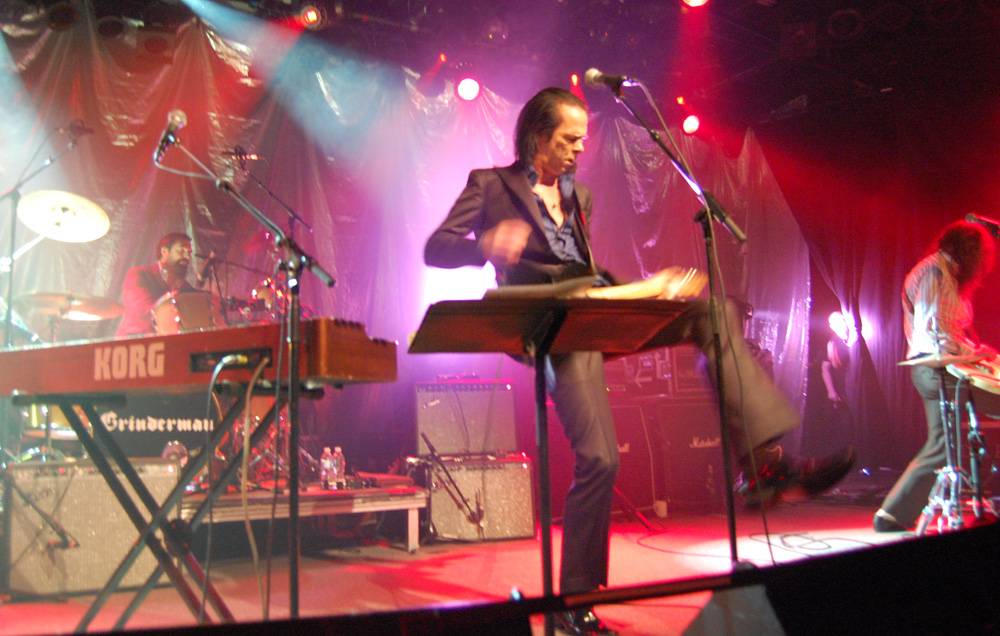 – review and photos by Raoul Fernandes

Just when things were getting a little too wintry and introspective this cold November in Vancouver, four men rolled into town, all swagger and sweat.

Grinderman, already touring their second album, is channelling more of the frustrated, sexual, and depraved aspect of Nick Cave’s dark and seemingly inexhaustible creative well. They have proven to be a force to reckoned with, their raw and dirty sound getting as much praise as any of his offerings with the Bad Seeds. If the band is mainly a mid-life crisis – as critics have suggested – leave it to Cave to really find a way to really own that frustration and turn it into a powerful muse. 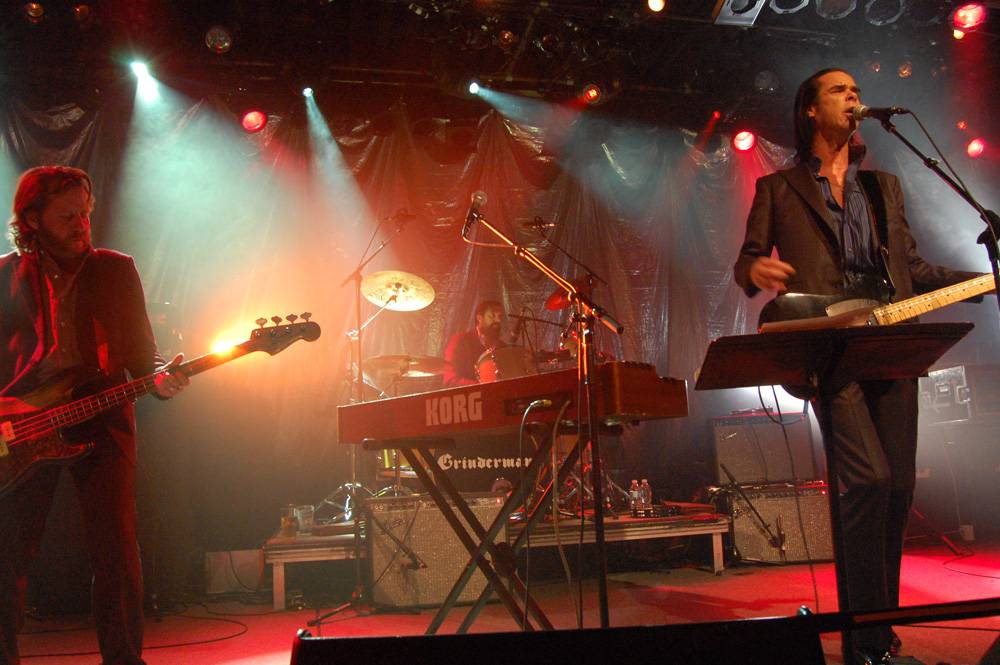 The tone was set with the scorching “Mickey Mouse and the Goodnight Man”, which found Cave doing his best wolf-howl while guitars screeched and the drums and bass pounded around him. They then moved on to “Worm Tamer”, the lyrics of which contains such zingers as “My baby calls me the Loch Ness Monster/Two great big humps and then I’m gone!”, revealing the tongue-in-cheek low-brow humour at the heart of Grinderman’s songs.

Cave often pointed and sang directly in the faces of the gleeful front row. This had the  hilarious effect of making the recipients often take the position of the various characters in the songs. What girl (or guy?) hasn’t wanted Nick Cave to scream at him “Who needs children? You are my child! Crying like a demon in your daddy’s arms!”? or then later to be scolded “Hey! don’t do that on the carpet!” from the smouldering “When My Baby Comes”. 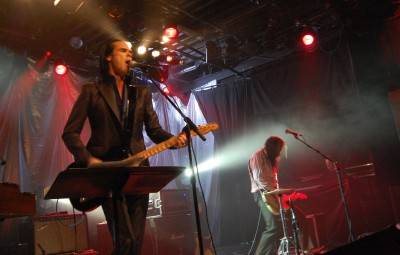 The great Warren Ellis, looking more and more like some evil wizard, was either skillfully torturing his guitar or torturing his violin, and sometimes seemed to cast spells on the audience with his frayed bow. Drummer Jim Sclavuno and bassist Martyn Casey held steady, doing their best sonic impression of a rampaging brontosaurus.

All together, the sound was loud and frantic as hell, and the few times it slowed down, as during the almost-introspective “What I Know”, barely allowed time to recover from the onslaught. “Honey Bee (Let’s Fly to Mars)” was fast and furious, “Bellringer Blues” was woozy and acidic. A highlight for me was the extended ranting in in the lusty “Kitchenette” where Cave screamed out in frustration, “I just want to relax!” – which seemed like the most impossible idea to everyone in the room at the time. 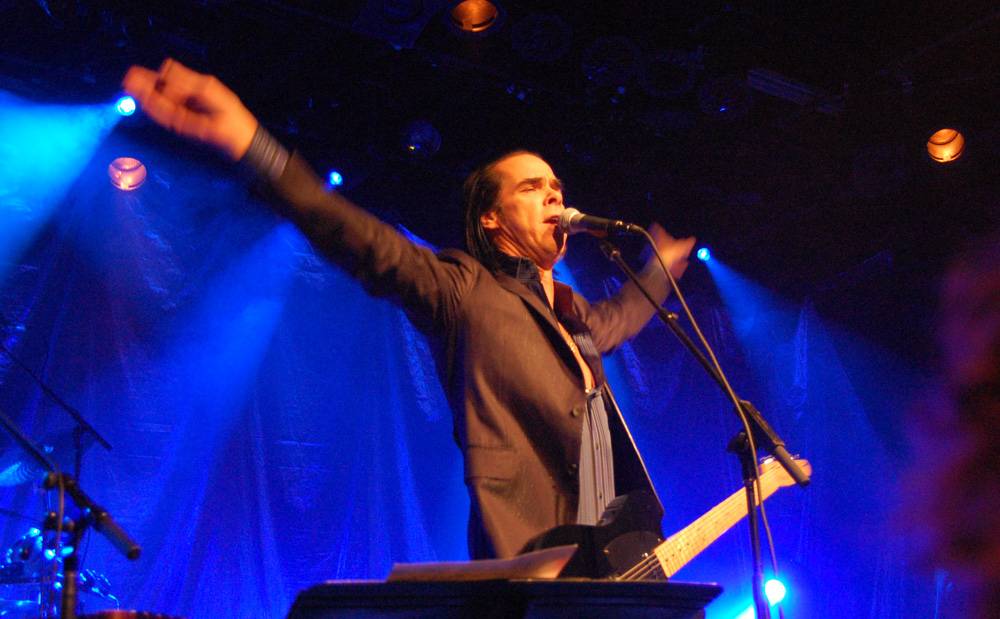 The desperation found its climax in “No Pussy Blues”, a song off the debut self-titled Grinderman album. During the crowd favourite, Cave stood up on his monitor, chronicling the many things he tried to do to get the young woman in the song to put out: “I gave her every type of flower, I played her guitar by the hour, I petted her revolting little chihuahua, but still she just didn’t want to”.

The upbeat “Palaces of Montazuma” in turn listed various offerings to his love, and had a sweeter tone, until he got to the line about one of the gifts being “The spinal cord of JFK wrapped in Marilyn Monroe‘s negligee” – which makes me shudder, even just typing it. 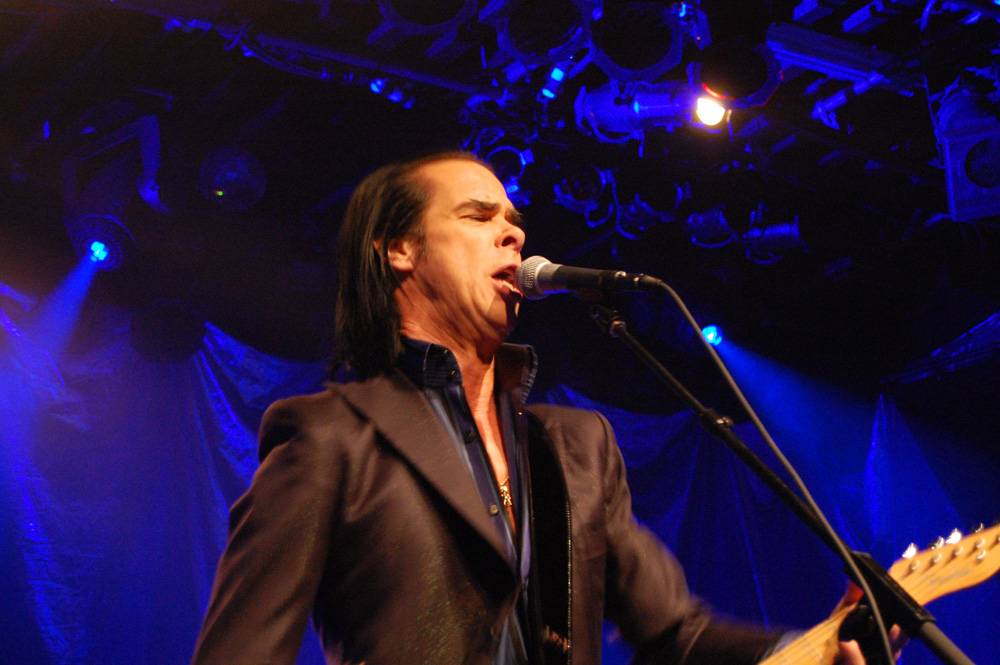 The night ended with a haunting, extended version of “Grinderman”, where percussive shakers brought to mind rattlesnakes: that image was further sharpened by Cave making hissing sounds into the microphone. He also changed a lyric to refer to “the snow and rain” of our recent weather. It was a nice subtle touch, and it was also notable that the band didn’t need to do much between-song chatter with the audience to make a personal connection; all of it was right there within the songs, and in the relentless and generous energy of their performance. 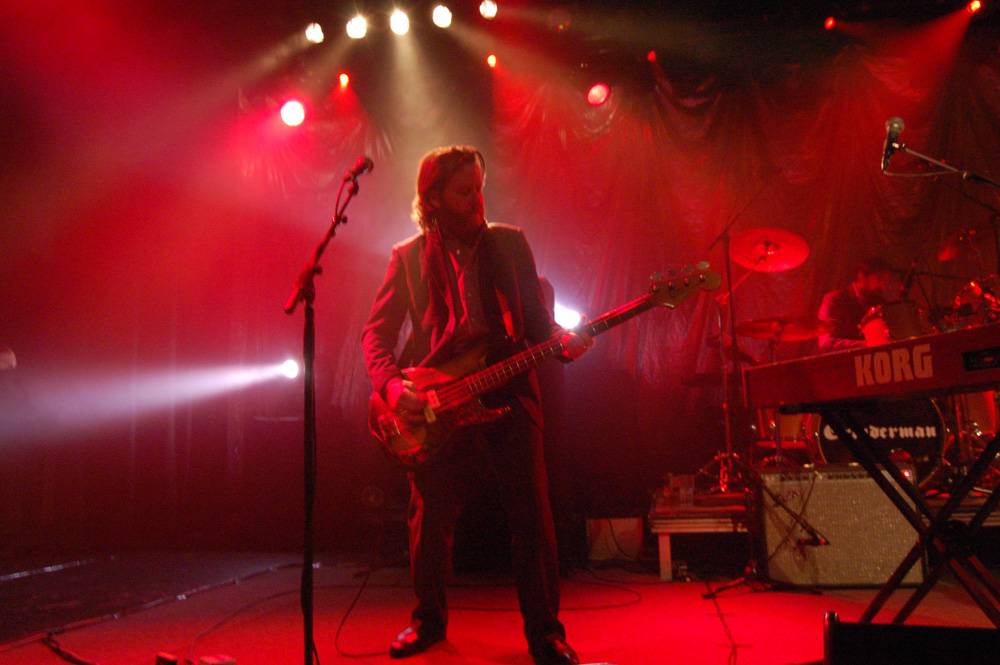 6 responses to “Grinderman at the Commodore Ballroom”