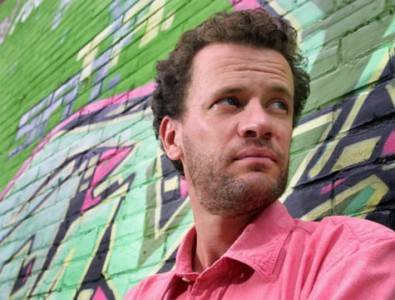 What comes after Pi?

When you are Yann Martel, the author of the wildly popular award-winning novel Life of Pi, you follow it up with a controversial, completely out-there, one-of-a-kind fictional take on an event that is still raw after decades – the Holocaust.

In length, Beatrice and Virgil is a bit on the short side, but it makes up for it in depth. Taking a somewhat autobiographical angle, the book is about an author who writes a controversial story, runs into issues getting it published and takes a break from writing. During this break he meets a man who is writing a screenplay (while running a taxidermy shop) about the Holocaust that revolves around conversations between a donkey and a howler monkey. Confusing? Perhaps. But if you apply some patience and trust that Martel has a point to his story, it really is an incredibly profound piece of work.

I caught up with Martel while he was in town for the Vancouver International Writer’s Festival to talk about Beatrice and Virgil, Life of Pi and a clever little project called What is Stephen Harper Reading?. It was difficult to not be wowed by the writer as he talked about his craft. He was so well-spoken, polite and engaging that I didn’t mind letting it slide when, upon listening back to my recorder, I realized he made up several adjectives during our conversation. When you are Yann Martel, you should be able to make up any words you like. 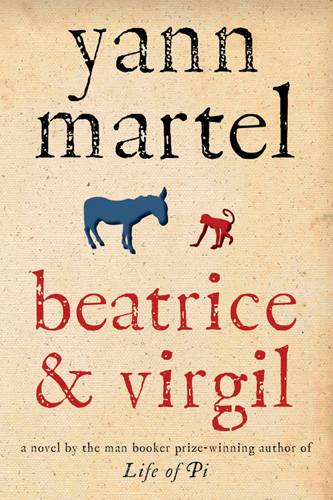 Jenn Laidlaw: So how is the festival circuit going?

Yann Martel: We started in Calgary at Word Fest, which also has a component in Banff and now we are here in Vancouver. Later we are going to IFOA in Toronto and then I am doing a few events in the U.S. You get to visit cities you don’t live in and you meet readers and other writers so it’s always a very stimulating and engaging activity to submit oneself to.

JL: How do you feel about public perception of your latest book Beatrice and Virgil?

YM: Well it’s been very divided. Some people clearly liked it and were maybe intrigued and engaged with this new, different approach to discussing the Holocaust and other people absolutely hated it. To be honest, I didn’t expect it to be so negative in some quarters, but that clearly means that I struck a note that these people didn’t want to hear and in some ways that is good. It at least got them thinking. When you write, you do something and you gift it to the world and what the world (and essentially what a reader) does with it is entirely their affair. It is part of the dialogue of art.

JL: As a writer, has this always been your foremost goal – to make the reader really think?

YM: Yes, I mean writing has to be entertaining, there has to be that element too, but the fact is any piece of writing – a play, poetry, essays – is an amazing way to make people think and explore what it means to be alive, what it means to be human and explore the human condition. I am interested in asking questions and doing so in literary ways. I have been lucky enough that some people have taken to the way I do it.

JL: There are several pieces to Beatrice and Virgil. I am curious how you approached writing each and in what order it all unravelled.

YM: It wasn’t like Life of Pi which is written in a fairly linear, chronological way from chapter one to 100. The play [within Beatrice and Virgil] of which you read extracts, I wrote out in its entirety. This creative process was much more meandering because of the great difficulty I posed to myself – what could I do as a writer who is not Jewish, who is not a survivor, who is not a descendent of survivors, who is not even continentally involved (being Canadian and not European)… on the magnitude of the genocide of the Jews in Europe. What artistic product can you create from that when you don’t just want to operate in the mode of a witness? It has already been done a thousand times very, very well. 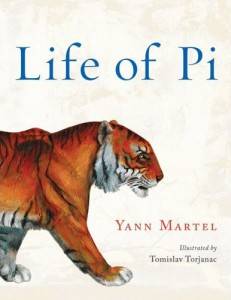 JL: I am curious whether or not humour is an intentional part of your writing.

YM: With a subject as grim as the Holocaust, it takes something to be just barely humourous for people to find it really funny because they want the solace of contrast. In my [yet to be published] essay I discuss that in depriving yourself of mixing humour and the Holocaust we deprive ourselves of a tool.

Beatrice and Virgil is certainly not a comic novel by any stretch of the imagination., but there are sections that readers may find amusing. I have no problems with using humour and the Holocaust. With the Holocaust and any other historic event, the artist has to be free to discuss it in any which way, with any degree of irony. By applying all those different ways of discussing [the event], we will extract every meaning from it and that can only be good…it is better to have an event represented in a thousand ways than one single way.

JL: How difficult is it to write the first page of a novel?

YM: It is an organic process. You encounter difficulties all the time and you address them and sometimes there is a log jam and eventually that breaks. This story took me many, many incarnations before it got to something that seemed satisfying, so it was more labour intensive. 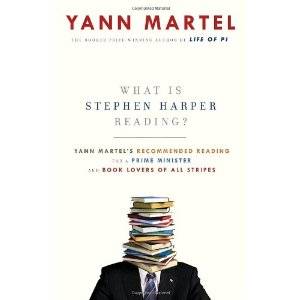 JL: Are you still sending books to the Prime Minister?

YM: Absolutely… unfortunately, yes I am. I am working on the 93rd letter today.

JL: And still no acknowledgment from Stephen Harper himself?

YM: No, no, no, none, whatsoever. I got a letter from the President of the United States but nothing from my own Prime Minister.

YM: Barack Obama wrote me a little note about Life of Pi. He and his daughter loved it, so he wrote me a note out of the blue. 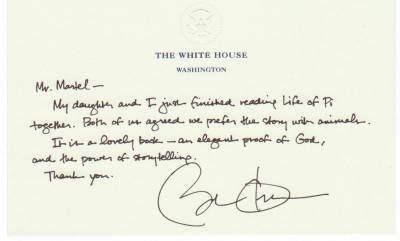 YM: Well… I think there is illiteracy at one level, not a literal one but an imaginative one and that is exactly why I do this. It is not that he needs to read Margaret Atwood to be Prime Minister, but for literature to be dismissed just as entertainment… it goes deeper and that is why we have kids read because it stimulates their imaginative muscles. Why should those imaginative muscles not be worked when you are an adult?

I think we have in Prime Minister Stephen Harper a man whose imaginative muscles are quite miniscule. A leader should be in part, a dreamer. Of course he or she has to have certain skills of practical policy making, but at one level prime ministers have to be dreamers and I don’t know how a politician gets their dreams if they never delve into literature.

Life of Pi – The Movie

JL: What do you think of Life of Pi being turned into a film?

YM: I love it! I love cinema, I love movies and Ang Lee is a brilliant film director. I love Brokeback Mountain, The Ice Storm and Crouching Tiger Hidden Dragon. Lee is a wonderful, versatile, sensitive, enormously capable director. In a sense I can’t lose. If the movie doesn’t work, then people will say the book was better and if it turns out to be a brilliant movie, people will say it was based on a good book. I am quite willing to take that risk because I think cinema can do great things.

YM: No, I sold the story but they have very kindly kept me involved. I have read the screenplay, I have met Ang Lee and spoken to him twice on the phone and I regularly communicate with the producer in Hollywood so they have kindly kept me in the loop in an informal way and that is okay because I am not a filmmaker. I have to trust Ang Lee, Â and I do.

YM: It’s a wonderful place. It is not well known enough. I love the Prairies – the huge flat skies and crisp air. The quality of life is incredibly high in Saskatoon. It is a small town but it has a great library system, good gallery…we have a good life there. People rush across the Prairies to get to B.C. the way people rush through the Louvre to get to the Mona Lisa, forgetting that there are brilliant paintings before the Mona Lisa.

JL: Any significant world events or topics you are planning to tackle in the future?

YM: I am already working on another novel. It features three chimpanzees in northern Portugal. Once again, animals; I find them to be useful literary tools to discuss life and the human condition. I am also going to keep on sending books to Stephen Harper until he is, you know, no longer Prime Minister. Hopefully that will be sooner rather than later. I do enjoy it, but it takes up a lot of time.