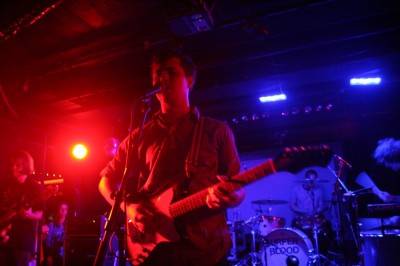 – review and photos by Ria Nevada

It was as sweltering as a Swedish sauna at the Biltmore Cabaret this past Tuesday (Oct 5). Steam was radiating off all the geek rockers’ backs as The Drums opened the Surfer Blood show with a vigorous streak of new-wave-inspired tracks from their self-titled debut record. The Brooklyn quartet introduced the debonair audience to a series of quixotic pop tracks such as “It Will All End in Tears” and “Down By the Water”.

Jacob Graham, executing pirouettes while thrashing clean chords on his guitar, was the magnetic force on stage. Vocalist Jonathan Pierce sang yearningly through the rollicking number “Make You Mine”, which brought to mind the playfulness of Small Faces’ “Lazy Sunday”. The audience responded with gusto, bouncing about the dance floor like Farmer Ted from Sixteen Candles. By the time the group made their graceful exit off the stage, all the hairsprayed coifs of the artsy crowd had completely deflated. The heat and rowdy movement had proven to be too much for their stylish updos.

After a final sound check, Surfer Blood was unveiled on the Biltmore’s compact stage. Their new moniker (the band used to go by TV Club) better depicts the trademark West Palm Beach surf sound that has drawn an assortment of fans in the past year. They have been making waves in the critics’ circle as well for their first full-length release Astro Coast. Last year, their single “Swim” earned a spot in Pitchfork’s 100 Best Songs list. 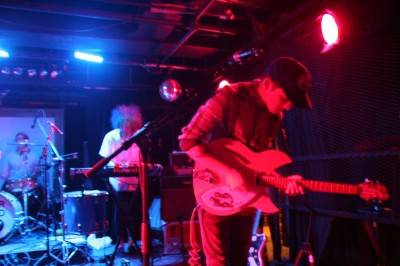 The down-to-earth troupe, decked in their best plaid and penny loafers, began their set with “Fast Jabroni”.Â  They followed the floating rock composition with “Take it Easy”, a beach-y tune complemented by percussionist Marcos Marchesani’s island beats. His afro continued to bob along as they steered through “Twin Peaks”, the bubbly melody sounding much grittier live thanks to Tyler Schwarz’ s aggressive drumming and Tom Fekete’s reverberating guitar. The band looked extremely comfortable their second time around on the Biltmore stage.

Frontman John Paul Pitts was constantly swinging close to the audience like an enthusiastic host. His deep growling on “I’m Not Ready” displayed his more introspective nature. This was without a doubt my favourite track of the evening, as it hit every nostalgic bone through Kevin Williams’ gentle bass line on the ’50s-pop sounding bridge. Similarly, “Harmonix” resembled the heartbreak and yearning of a Smiths ballad both musically and lyrically. It also featured a – you guessed it – harmonic guitar motif that echoed through the venue’s red hued walls.

The sold-out show is a mere indicator of the splash Surfer Blood has made in the indie pop scene. They will be touring the U.S. for the rest of October, then they’re off to Europe with Interpol until the end of the year. One thing is certain – in Vancouver, a loyal group of followers will be pining after them. 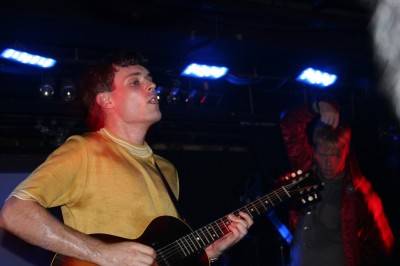