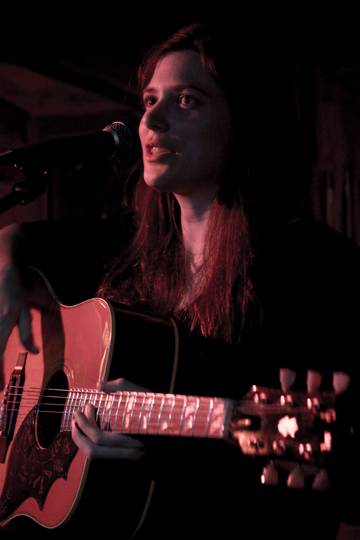 Following the release of her 2000 full-length album and its follow-up EP, How I Got AwayÂ Shannon StephensÂ went into semi-retirement.

But in 2008 Bonnie “Prince” Billy, Will Oldham to his mom, recorded a Stephens song (“I’ll Be Glad”) for his album Lie Down in the Light, and that lit a fire under the singer-songwriter. Last year, Asthmatic Kitty – the label co-owned by Sufjan Stevens, her bandmate (along with Matt Haseltine and Jamie Kempkers) in the ’90s group Marzuki – released The Breadwinner, a perfectly lovely and remarkably naked look at weathering hard times.

This summer the label re-released Shannon Stephens, her debut. It’s another acoustic charmer that sounds of a piece with The Breadwinner; you’d never know that nearly a decade separates the writing and recording of the two records.

Shawn Conner: Now that you’re a recording artist again, are you going out to see much live music?

Shannon Stephens: I went to two shows this week and I’m going to another one tonight. I saw Southeast Engine with Deerhoof on Monday and DM Stith, he’s on Asthmatic Kitty, and Inlets on Tuesday, that show was awesome. And then the guys stayed at my house and did their laundry. The night before last was my CD release show and tonight we’re going to see Fol Chen, also on Asthmatic Kitty.

SC: There are two new songs on this re-release?

SS: They’re actually old songs but never properly recorded. One was never recorded at all and the other was just recorded for a demo so it was nice to do them right and put them on here. They’re songs from that era that don’t fit as well with my new stuff.

SC: Do you still feel connected to these songs?

SS: Yeah I do. They’re still really fun to play. I played them at my show on Wednesday and it was a lot of fun, the band enjoyed them too.

SC: Are there any songwriters who are really floating your boat at the moment?

SS: Oh, this question always makes me blank. I’ve been listening to DM Stith. I love his piano work and his arrangements, and the way he sort of casts a spell. It’s sort of hypnotizing, and then to see him live, where it’s just him and an acoustic guitar, it’s a totally different experience from the record but still casting that spell. There’s something magical about his songs for me. I like the first half of the Local Natives album. I’ve been listening to Sharon Jones,Â that’s fun to be-bop around to.

SC: Is there a songwriter you go back to for inspiration?

SS: Well, over the last three years, I’ve been going back to Tony Dekker of Great Lake Swimmers. Whenever I listen to one of his records I just want to go write music in the bedroom. He’s definitely an inspiration. Also I’ve been delving into some of Will Oldham’s older stuff, you know, Bonny Prince Billy. And I’m really impressed by some of those songs and the arrangements. It’s just clear this guy has done five times as many albums as I have.

SC: Does that make you want to be more ambitious for your next record?

SS: I think so. I actually think I want to get some help, someone with more experience who can help me really fill out the parts of the songs that are supposed to be full, and to make them sound rich enough when they’re sparse to still be compelling. With The Breadwinner I was doing all the arrangements myself. And I got to a certain point, but i don’t feel I got as far as I wanted to.

SC: Do you have anyone in mind?

SS: Well, I haven’t asked them yet. So I better not say!