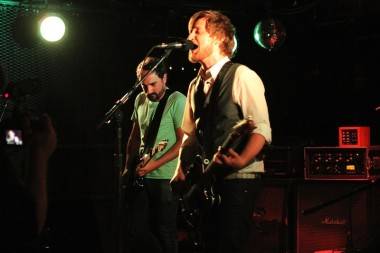 After a poor showing on Wednesday night, Vancouver music fans finally came out of hiding. Ryan Dahle‘s show at the Biltmore July 22 was, by the looks of things, heavily guestlisted, but that’s bound to happen when you’re playing your first hometown gig in a long while, and after you’ve been around long enough to be considered part of the city’s musical history. At least there were enough people to qualify as a sizable crowd, unlike the Media Club (for Villagers) and the self-same Biltmore (for Sweethead) the previous night.

Dahle, for those unfamiliar (though the last name might ring a bell – brother Kurt plays drums in the New Pornographers), was once in a band called Age of Electric which, in the ’90s, experienced some mainstream (i.e., MuchMusic) success. Dahl than formed, with Kurt and bassist Ian Somers, the band Limblifter, which gave us three albums and two awesome songs of sheer pop-rock epic-ness – “Ariel Vs. Lotus” and “Wake Up to the Sun”, as well as “Tinfoil”, “Vicious” and “Screwed It Up”. Last year, Dahle released Irrational Anthems, his first record under his own name, and which includes strong contributions from classically trained bassist Meegan Bradfield.

Following a fiery set by Vancouver rock band The Manvils (whom Dahle has produced), the headliner and crew – including Somers and Bradfield, recovering from having her appendix removed – performed much of Irrational Anthems, as well as a bunch of Limblifter songs. The latter, most of which came towards the show’s end, included the aforementioned “Ariel Vs. Lotus” and “Wake Up to the Sun” – but not, alas, “Vicious”. Other highlights: “irrational anthems” such as “Target Practice”, “Agoraphobe”, “Lion Piano” and “Awfulizing” (this writer’s personal fave from the record).

For some, especially those who had grown up with Dahle’s music, it must have been somewhat strange to have been in beer-rubbing distance with the one-time MuchMusic star, now all grown up and looking dapper in vest and beard. But though his music has matured, Dahle’s pop songwriting instincts are as vital as ever.