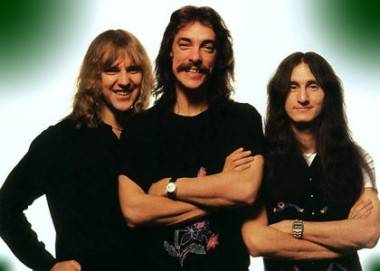 I wasn’t a fan going in to see Rush: Beyond the Lighted Stage, and I wasn’t exactly a fan coming out either. But I did feel some regret over never really understanding or enjoying the “world’s biggest cult band”, as Geddy Lee describes the legendary Canadian three-piece. It’s a constitutional issue for me – I can admire their quantum precision as musicians without being emotionally engaged by the music. But it’s a little uncomfortable seeing the same flicker of contempt on the faces of the three band members and a few of their high-powered fans like Billy Corgan whenever they discuss “the critics” who “don’t get it.” I felt left out!

In any event, Rush: Beyond the Lighted Stage is an insanely entertaining movie, and one made with the full cooperation of the band, tons of old footage, and deep affection on behalf of filmmakers Sam Dunn and Scot McFadyen (plus onscreen devotees Trent Reznor, Jack Black, and Tim Commerford, among many others). It all begins in Willowdale, Ontario, with Geddy Lee and Alex Lifeson describing how their lifelong friendship was hatched in a suburban elementary school. Both were children of European immigrants with tongue-tripping last names. Lee even had the audacity to be Jewish.

Naturally, the arrival of lanky weirdo Neil Peart in ’74 is a turning point. Fans will be jazzed about the insights he provides about himself – why he doesn’t like meeting fans, for one thing. Why he went back to basics with jazz mentor Freddie Gruber in the ‘90s and relearned his instrument. And of course, how he and the band coped with his “Ghost Rider” years, when he tragically lost both his daughter and his wife within 10 months of each other. In the end – and especially in this section – Rush: Beyond the Lighted Stage makes an odd companion piece to Anvil! The Story of Anvil, emerging as a movie about friendship and humanity, with Canada’s beige-coloured suburbs and nerdy time signature changes as its backdrop. The end credit sequence alone is worth it, with three wine-drunk old buddies sharing a meal, discussing the next project, and cracking each other up.

Trailer – Rush: Beyond the Lighted Stage:

Adrian Mack: Were you surprised at how much the band got behind this movie?

Sam Dunn: We expected resistance from Neil particularly, because he’s known to be quiet and fairly reclusive, and doesn’t really get involved in a lot of the press the band does. He communicates to fans through his books and his lyrics. So we expected a little reticence from him, but oddly enough, he was probably the most excited about doing the film. When he asked us what our vision was, Scot said, “Well, we really couldn’t tell you what the Rush story is in a single sentence.” So I think being a writer and a creative person, he appreciated that openness. Typically you need to have your pitch well honed when you go into a meeting like this and I think the fact that we didn’t ended up working to our advantage.

AM: Was there another movie you used as a model?

SD: We were guided more by what we felt were the interesting dimensions of their career, whether it was the struggle with making 2112 after coming out of the failure of Caress of Steel, or their shift into becoming more a of a keyboard-driven, new wave band – we just thought there were so many interesting turns in the story that we didn’t really feel like we needed a template to follow. Rush is so unusual and so on-of-a-kind that you can’t relate them to anything else whatsoever.

AM: It’s not so much a rock film as a story of friends, correct?

SD: Rush is the world’s most popular non-rock-star rock band, and I really do think you can talk about the great songs, the musicianship, their performances, all the elements that do contribute to the success of Rush, but I think what we discovered is that it is actually the friendship in the band that’s the main key to their longevity. God love ’em, we made a film about Iron Maiden and we love those guys, but their success has nothing to do with their ability to communicate uniquely with one another. With Rush it’s the real deal.

AM: How the fuck did you get the footage of a teenage Alex Lifeson telling his parents he was dropping out of school? Why was there a camera there when that happened??

SD: Well, it’s incredible because one of Canada’s legendary documentary filmmakers Allan King put together a film (Come On Children) that was going to document the experiences of young people in Ontario who were going through some degree of family struggle, and it just so happened that Alex Lifeson auditioned to be in this film, and made it. So we were lucky – we found out about this footage and we were blown away by it because it’s a documentary filmmakers’ goldmine when you find candid footage of a rock star at a young age. We were pretty damned pleased when we came across that piece of footage

AM: What couldn’t you discuss?

SD: To be honest, the guys didn’t put up any barriers. In fact, Alex asked us in one of the interviews, “Do you guys want to talk about what happened to me in Florida, when I got in trouble with security in the bar and everything?” And we said no, cause it was such an anomalous moment in the Rush career and I don’t think it connected to anything. I think the one thing that we were obviously very sensitive about were the tragedies that struck Neil. There’s sort of a test of character there that few bands have to meet. You know, I think the first test of character was the 2112 transition and saying “Fuck you” to the music industry, the second test of character was in the ‘80s when they completely shifted their sound by their own accord and succeeded, and the third test of character was a personal one with Neil.

AM: Three acts and a happy ending!

SD: Yeah, it kind of worked out that way.

AM: Which of your interview subjects surprised you the most?

SD: We were completely blown away by Billy Corgan.

Scot McFadyen: Definitely Trent Reznor. He came, he was prepared, he was a super nice guy, and I think he was very articulate. You know when you listen to somebody, you know exactly how it’s gonna fit in the film. He was very editable. And then Billy Corgan was a huge surprise. I wasn’t expecting a lot from Billy. I don’t know why. Yeah. I didn’t expect him to be that thoughtful. I think the band was surprised at how much he got them and how much he understood them.

SD: On a general note we were struck by how many musicians were influenced by Rush and their music sounds nothing like Rush whatsoever. Usually you can pick out a band that’s been influenced by Metallica or Iron Maiden, but we talked with everyone from the Smashing Pumpkins, to Nine Inch Nails, to Primus, to Pantera, to Death Cab for Cutie. I dunno if those bands have ever been uttered in the same sentence before, and the one thing that unifies them is Rush. Not just the music but the attitude and philosophy they have where they are creating music for themselves, and that was a key to their success.

AM: What was the band’s response to the finished film?

SM: It was cool to watch it with them and I got a sense of how strange it must have been to see themselves over 40 years. They were just laughing hysterically at a lot of the stuff we found. There was a lot of, ‘Where the hell did you find that?’ And ‘I didn’t know that existed!’ And then after Geddy said, you know, ‘Great film,’ and he gave us a hug and said, ‘just try to put less of me in it if you can’. I feel like they were touched by it and their families were touched by it.