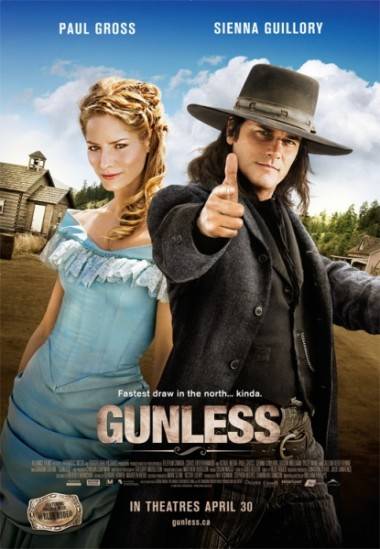 Shot in 25 days in British Columbia’s Osoyoos on a custom-built set, the film is unusual (if not entirely unique) on the Canadian cinematic landscape because it is not just a Western but a Western that is funny. Phillips opens up about the experience and the ever-changing frontier of our national cinema. 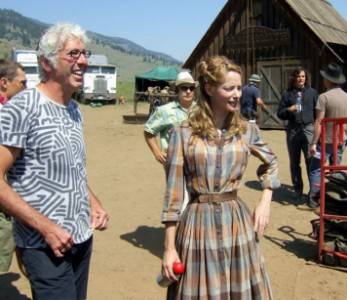 Co-producer Niv Fichma and actro Sienna Guillory on the set of Gunless.

Rachel Fox: Tell me about the film – you wrote and directed it. Where did the idea come from?

William Phillips: It came from this notion that I wanted to make a Western. I am a big fan of Westerns and I’ve always been drawn to that genre. They’re great fun. When you think about the classic Western it is an American genre, but I am Canadian and I make films in Canada so I didn’t want to do that thing where we just “pretend” that it’s America. I wanted to place it in Canada. I decided what we should do is take iconic elements, those pieces that make classic Westerns – the location, the look of the town, the makeup of the townspeople, the gunslinger – and push it in to Canada. As soon as I did that, it started to get funny. It begs it. You take the seriousness, the earnestness of the classic Western and you put it above the 49th parallel and it starts to get silly right away.

RF: What sort of research did you do into the Canadian West, which seems to dictate a lot of what happens in the film?

WP: We did general research into the west in the 1880s and took pieces of the puzzle – a saloon, lawmen, homesteaders – and looked into how it would apply in Canada at that time. For example, we didn’t have a sheriff because we had the Northwest Mounted Police. We looked into forts and how they patrolled areas, that sort of thing, and then it became part of the story.

RF: The film is called Gunless and centers on a group of Canadian townspeople who don’t know what to do when confronted by an American who proposes a duel. Is there some sort of subtle, or perhaps not-so-subtle, comment on contemporary differences between our two societies?

WP: Yeah, absolutely. For good or for bad, as Canadians, we define ourselves more often than not by saying, “We’re not American.” I wanted to not just say, “Canada is different from America,” but I wanted to play with the enigma that we also have. We do tend to say, “No, we’re not Americans” and look down our nose at Americans and judge behaviour down there.

But at the same time, we have celebrity envy. We look down there and we go, “Oh, that’s really cool!” There is that duality that we have. We’re silly people sometimes, because of that. We do judge, but if somebody from America recognizes us, let alone comes up here, we’re so happy about it.

RF: Tell me about shooting in the Osoyoos and also about the set.

WP: We decided to go for that part of the country because it has a western feel. When we started scouting we were just blown away by the countryside. The goal was to find a location that showcased how beautiful it was but also ideally allowed us the chance to put a camera down anywhere on our set and have a 360 degree shot that had no vestige of the 20th or 21st centuries. We were able to find it on this big ranch. We started from scratch and built a town for our movie.

RF: Is it still there?

WP: It’s still there. We left it for the rancher… he’s got grandkids.

WP: I had heard whispers that people were scouting it while we were still shooting. So I said, “This better not show up on television before my movie comes out!” [Laughs] But I think we’re safe.

RF: I hope this can do something for that area in terms of getting things shot there.

WP: I would love that. The film community in Canada, no matter what – we’ve got to support each other. The idea of tearing the tow so that other people couldn’t shoot there just wouldn’t come to anybody’s mind. That it can be re-used and re-modeled and turned into a different looking town is great.

RF: There seems to be a renaissance happening in Canadian film – the association I have in my brain in regards to the quality of film…

WP: The association that many people have …

RF: Yes. Sometimes you can be flipping around on the television and think, “I don’t know what this is, but it just looks Canadian.”

WP: Over the last 20 years because of the amount of American productions that have come up here we’ve been able to build our infrastructure so that we can really practice our craft. We have the workforce and the facilities now so that we can make great, high-quality films. The only thing that sometimes can and will hold us back is budget, and that’s a reality.

So I think when you’re flipping through these channels and you think, “Oh, that’s Canadian” it’s not because we don’t know what we’re doing. At the end of the day the biggest difference between Canada and the American studio system is huge budgets. So you just do what you can… you get it right.

RF: You’ve worked with high-profile Canadian actors like Ryan Reynolds (Foolproof), Tyler Mane (Rob Zombie’s Halloween), Paul Gross (Due South, Slings and Arrows) and Dustin Milligan (90210). It seems like a lot of Canadian actors are coming back to Canada to work.

The people that you’ve named are Canadians through and through. I think that in the back of their minds they think, “I want to get back. I want to do a Canadian feature.” Obviously, some of them are down there and they’re doing very, very well and they’re going to pick the times when they can do it. There is a sense that the quality is happening and that does draw them back.

I also think that actors in general, whether they are Canadian or American, are being drawn to lower budgeted pieces like you’d find in Canadian independents because fewer films are getting made everywhere, including America. Actors want to work. I think a lot of these actors, like a Joshua Jackson (One Week) for example – they have a Canadian passion and they believe in Canadian product. They believe in the arts system up here.

But you know, there are A-list actors who are not Canadian (Briton Julie Christie received an Oscar nomination for her role in Sarah Polley’s Away From Her) but very prominent who would come to Canada in a heartbeat.

RF: It’s pretty amazing that there are three high-profile Canadian films – Control Alt Delete, Passenger Side, and Gunless – opening wide (in Canada) within a week of each other.

WP: It’s something to be proud of. I hope it works out well because I’d hate to split it up so that they go, “Nobody did well at the box office” if we take each others’ audience! But I’m proud of it. I mean, if you get a film made you should be proud. We can all talk about box office and how everything lands, but the fact is that these are all being released at the same time… we’ve got to be proud. It’s amazing.

RF: It’s a definite red thread running through all of these incredibly varied and diverse films…

RF: I stole that from a professor of mine who used that metaphor a lot in his lectures. You can steal it.