You have to love a city where you can pass through a pot rally on the way to a wine-tasting.

Naturally, none of the young hippie types, most of whom are probably French Canadian, were about to pass their joint over to the dude in the dinner jacket. But the sparkling wine was flowing as we were ushered into a room upstairs at Coast, the massive seafood restaurant on Alberni (a block away from the Vancouver Art Gallery, site of the thousands of 4/20 smokers).

The tasting began with a pairing of the Hawkes Bay Sauv Blanc and scallops in a mild lime sauce and a mushy but delicious avocado tempura. Bill Spence, Matua’s brand ambassador and founder and our host for the evening, visited each group at the two tables to introduce the products; he called the Hawkes Bay an “entry-level” wine, noting that it “rolls along”. “Cantaloupe”, “grapefruit” and the more general “citrus-y” were used by various at our table to describe it. 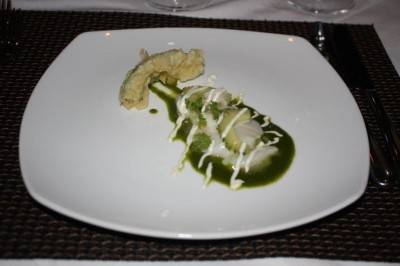 The scallops and avocado tempura.

Matua Valley Wines was the first vineyard to bring sauvignon blanc to New Zealand; now it grows several variations (and last year rang up over $1 billion in export sales, according to Spence). Next up, the Matua Valley Shingle Peak Sauv was served with mussels, snapper and fingerling potatoes. I found the Shingle Peak, a blend of grapes from three different valleys, to be slightly more subtle and tart than the Hawkes Bay. 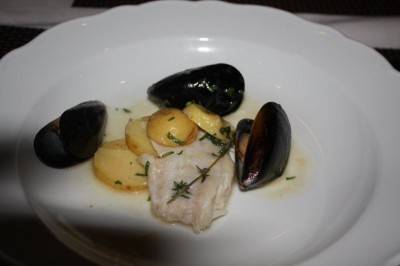 Mussels with snapper at Coast.

To go with a third course, four spears of asparagus and a slab of sea bream (the originally scheduled fish was held up by spewing volcanic ash, according to Coast executive chef Josh Wolfe), the Paretai was poured. Spence described the high-scoring (90 in Wine Spectator) libation as having “a mineral character”, and a wine that “keeps going on the back of the palate; it doesn’t jump out of the glass.” But after three variations on the Sauv – all quite a few cuts above the cheap plonk I usually reach for at the liquor store (the following day I found the Hawkes Bay Sauvignon Blanc retailing for just under $18 at my neighbourhood booze outlet) – we were ready for something a little different, and more red in hue. 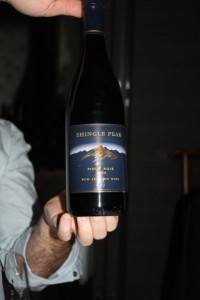 “Black cherry”, “peppery” (my description, and one shot down by my dining companion), “velvet-y”, “blackberry” and “a little vanilla in the back” were the terms and phrases tossed around as the Shingle Peak pinot noir grazed our palates (“like drinking night” was my more poetic attempt at describing the wine). Most if not all of our fellow diners had the rack of lamb (pronounced “between great and good” by the woman beside me), but we had fish – sable in my case, salmon in my guest’s.

Dessert was passed over by us, mainly because of a cleanse we’re on (and no, wine is not allowed, but one has to live a little), but after the sprightly combo of the main course and the pinot noir, we didn’t feel the need for another bite.