The sweet sound of soft male harmonies penetrated the room. A small venue, the Media Club’s every corner was filled with Megafaun’s creative melodies. Opening for Horse Feathers, the Durham, North Carolina band may have been a surprise to many, but the trio’s set of atypical folk gained new followers. The group’s presence and interaction with the audience, particularly the brotherly banter between frontmen Brad and Phil Cook, was no less than pleasantly fulfilling.

It was endearing to witness a band whose positive energy made it clear it had so much more to offer than an openingÂ  set allowed. The three bearded men seemed quite content with the audience and the city itself, referring to it as “the ‘couve”, a term apparently unfamiliar to the Cooks’ 52-year-old mother according to one between-song anecdote. For everyone else, it was a umbilical gateway into the relaxed and comical domain of the Cook Bros. and drummer Joe Westerlund. 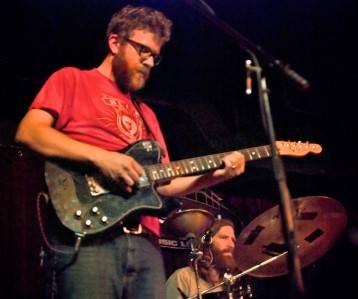 And when the members weren’t telling jokes or stories about their travels, they engaged in a series of electrical and euphonious songs that encouraged muscle-tensing reactions. For a finale, the Megafauners, their voices binding together to create a calm and graceful tone, immersed themselves in the pond of people sitting and standing in front of the stage, leaving us with a perfect segue into the evening’s headlining act.

Horse Feathers: a name many may not be familiar with, but certainly one that deserves credit. The Portland quartet’s most recent album Thistled Spring is taking the band on a tour across North America, with Vancouver as the second stop. 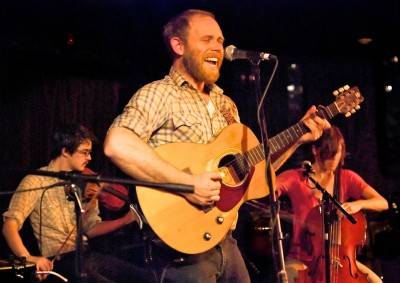 When Horse Feathers greeted the audience, the band’s energy seemed soft and fragile. Violin, cello, acoustic guitar and percussion merged for a folky, dramatic and often sad sound. It was an earthy evening and the songs performed in that tiny room serenaded the guests with the swaying harmonics of the strings. This indie-folk foursome revealed its potential live, with a more crisp, dynamic result than in the studio as singer/frontman Justin Ringles’ delicate voice led the musical bandwagon behind him.