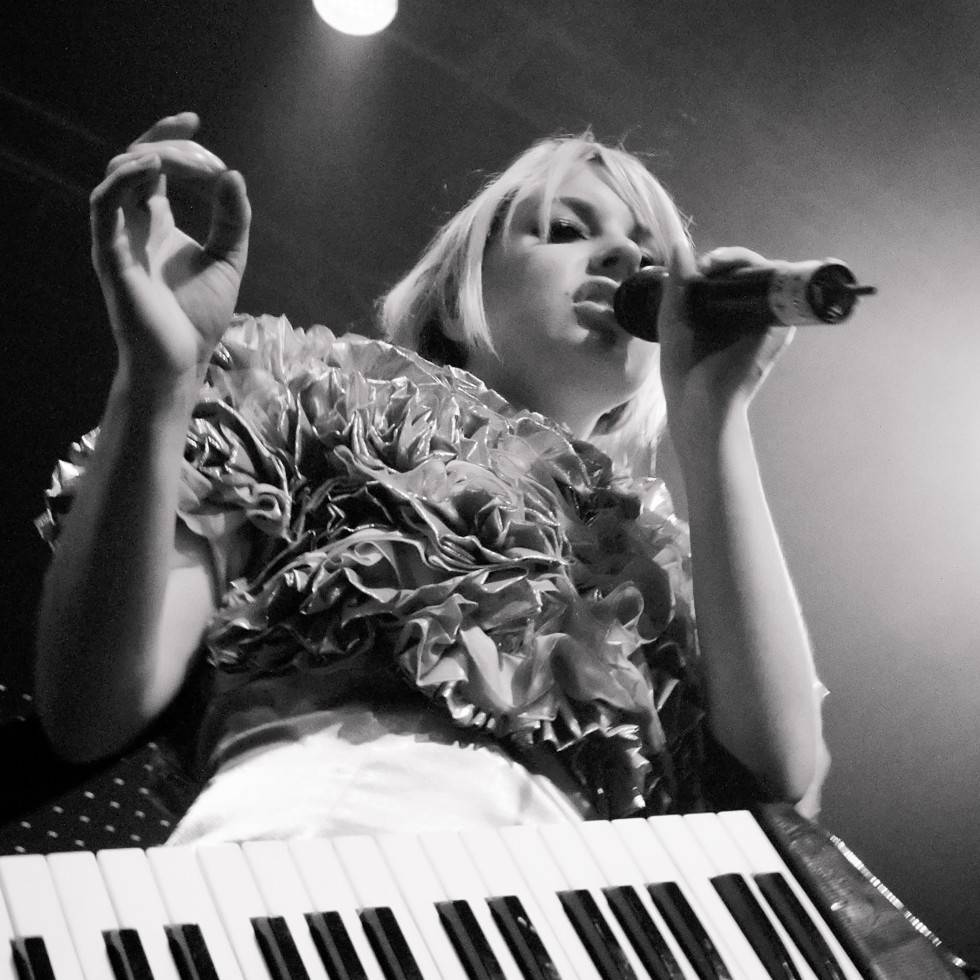 We sat down with Little Boots, aka Victoria Hesketh, the afternoon of her March 5 2010 Vancouver show.

Hesketh is a former member of an all-girl trio, Dead Disco, but left to pursue a solo career writing (in her words) “cheesy pop songs”. The results: dance-pop hits “Remedy” and “Stuck on Repeat” and a full-length debut, Hands. Hesketh also has “a first-class honours degree” (some kind of British thing) from the University of Leeds, so she’s no dummy. (At the end of our interview, she pulled out her reading material for the tour – Crime and Punishment, Invisible Cities by Italo Calvino, a book of poetry by Anne Sexton and a book on reading the Tarot – “Don’t ask me why,” she said of the latter.) 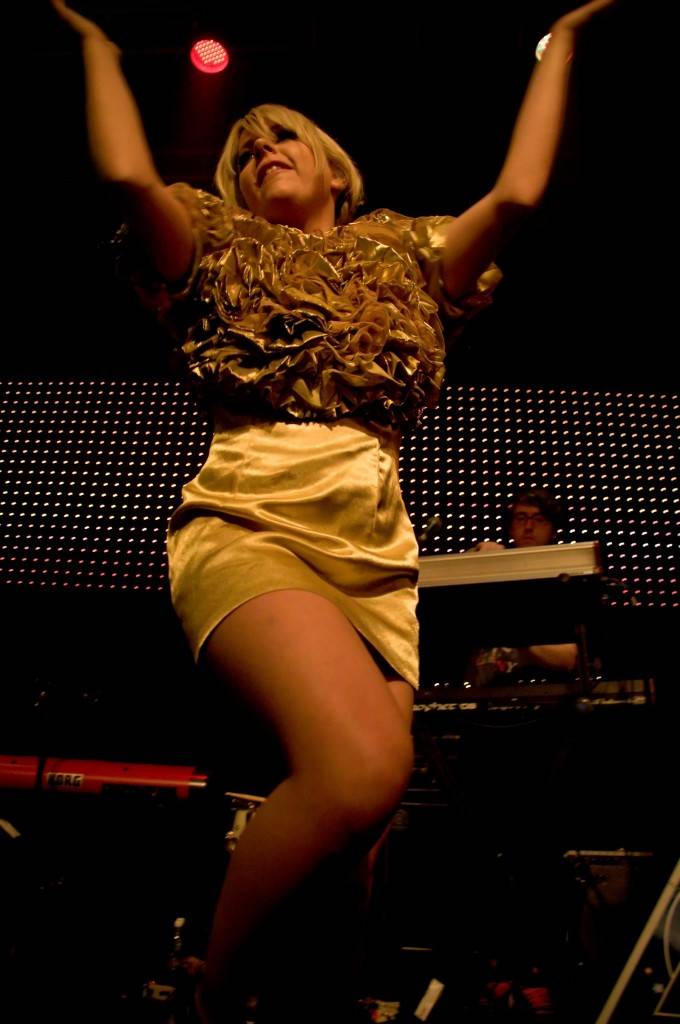 Little Boots at the Venue, March 5 2010. Photo by Michael Caswell

Shawn Conner: Are the laws different in the U.S. and Canada when it comes to laser operation?

Victoria Hesketh: You have to have a person just doing lasers and nothing else. When we’re at home we just have our lighting guy operate the thing. Here you have to have someone dedicated to the laser job. We can’t really justify paying for one person just to do lasers at this stage. Luckily, we found a lovely man who helped us out in New York. We have a really puny laser anyway, and he brought his massive ones down. He’s going to do Coachella with us as well.

SC: Who do you have in the band with you?

VH: I still have the guys who I’ve always played with, who play keyboards and drums. And now we have an extra girl who plays keyboards and sings and plays a bit of guitar as well. It’s really live now. The thing with electronic music it’s hard to make it super live, everyone’s just got a computer running now. We did that for a long time and you just kind of miss that live feeling.

SC: From the video stuff I saw it looks like you’re coming into your own as a performer.

VH: I hope so. I’ve been doing it long enough so I’d be worried if I wasn’t.

SC: Because you were performing with Dead Disco too.

VH: I mean, the first time I was on stage was when I was two years old.

SC: When you were in university was there any question that you might not want to do the music thing?

VH: It wasn’t that I didn’t want to do it. I’ve always been quite academic. So it’s like, do I want to throw all that away for something that’s so fucking chancy? It wasn’t until I definitely had a record deal that I was brave enough to do the other stuff.

SC: You were an honours student. So it’s not like you were clubbing at night and…

VH: Oh I was. I’m quite good at multi-tasking.

SC: And you’re a Captain Beefheart fan? [according to Wikipedia]

VH: No, I listened to Captain Beefheart when I was like 17 and in a punk band and thought it was cool. It’s obviously not a major influence, just like Wikipedia is full of lies. 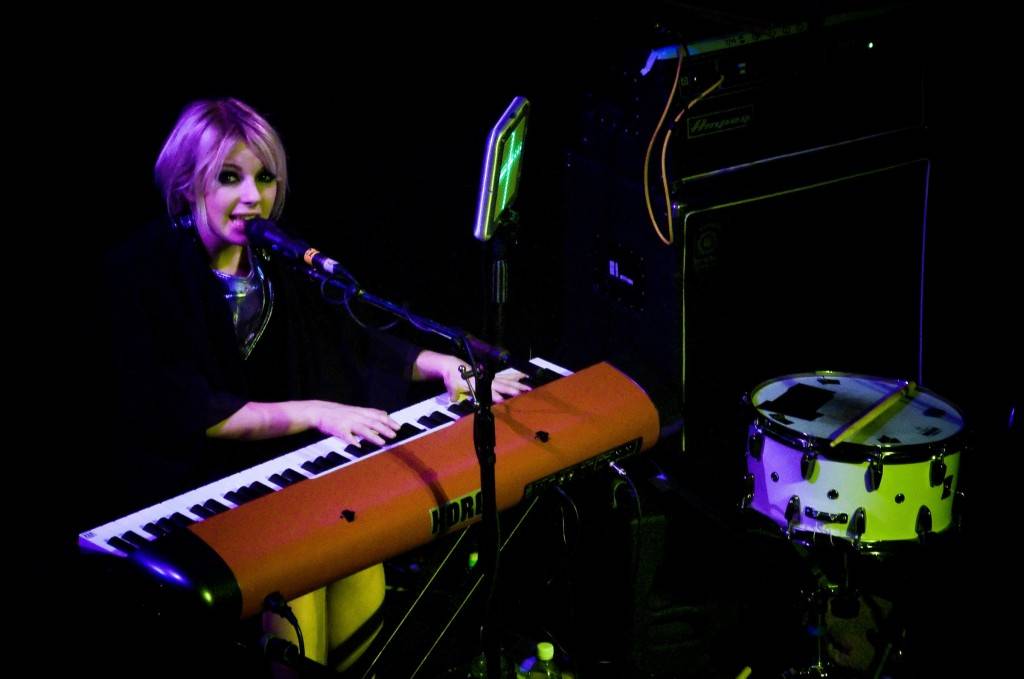 VH: Probably uhm “Darkness”, maybe? I love “Sound of the Crowd” but that’s more for a party. And I love “(Keep Feeling) Fascination“.

SC: What was it like working with Phil Oakey [Human League vocalist who dueted with Hesketh on the Hands track “Symmetry”]

VH: He’s great, you know. We were quite nervous when we were meeting him. He’s a very lovely guy, very down-to-earth. Still got that amazing, spine-tingling voice.

SC: Does he regret any of his haircuts?

VH: [laughs] I didn’t ask him that, I’ve just met him a couple of times still. We did it live as well, that was really fun.

VH: I don’t know, I just find stuff. I try to express the music with the things I wear. I get a lot of Lady Gaga references now, which is a bit like… other people can wear shiny clothes too. I want to express it with whatever I do, the website, what I wear onstage, what the stage looks like, I want it to be an extension of the music.

VH: It’s ridiculous. I don’t normally where this. It’s obviously for a massive man. I kind of like wolves, they’re funny.