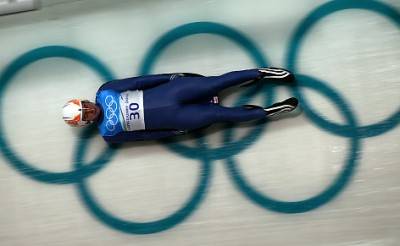 LP: The scoop on the opening ceremonies isn’t that big a deal, but apparently k.d. lang is supposed to sing “Hallelujuah”. Pffft. Who cares. I can’t stand her. And Bryan Adams is going to do something, “Summer of 69” or something ridiculous. And then they have, uhm, apparently it is really amazing though however. And then there’s going to be something, what was it now, let me think. They changed “Oh Canada” to a blues version. How does that make sense? Kinda weird. I heard they actually changed some of the words too which is going to tick people off because they’re not going to know what the words are. ‘Cos Roz says it’s already ticking people off ‘cos they can’t sing along with it ‘cos it’s blues. So people are confused and kind of cranked ‘cos they wanted to sing “Oh Canada”. Oh, and then, uhm – did you hear about what happened in Whistler?

LP: [Gasping] Wasn’t that awful? Did you see it happen?

SC: They’ve been showing it on the news?

LP: No. YouTube. That Twitter thing – I watched that live feed [of the torch relay] for the whole day. All morning and all afternoon until it stopped at 2 o’clock. My whole day was wasted. I watched it go everywhere and it was making me mad because they spent so much time in the East End. They went by mom’s place and Rupert Park. Forever!

SC: And you still didn’t see it!

LP: No! And then they went back to fucking Commercial again! I was so mad! [Louise missed it the first time it was supposed to go to Commercial because the relay was rerouted to avoid protesters.] But this time it was Commercial and Broadway and it was a nightmare there. That SkyTrain station was unreal, it was mobbing everywhere. Anyway, apparently Celine Dion is not attending this event because she’s trying to conceive a baby.

SC: How many does she need?

LP: She only has one. She’s miscarried five times with her inseminations. But she’s going to go back to Vegas next March for another stint.

[The battery on my mini-recorded died at this point, so the following is a less-than-faithful, typed-on-the-fly direct transcription. Sadly, this means I lost the bit about the Terry Fox hologram, which was pure comic gold.]

The Barenaked Ladies, I heard it on my Twitter, on my Twittering thing. It’s like a dialogue going on between millions of people at the same time…

LP: No, I didn’t, the webcam that was following the torch guy. It was at the bottom, watch the torch or read because it wouldn’t fit together. It was difficult to decide which one I was going to do, I went to the the gossip rag, the Twitter page. That’s where I got the link to the YouTube video. They took them all down saying “Adios…” They built a bad luge, it’s too fast and it’s not high enough, he was going 140 kilometres, there were these steel columns, he [Nodar Kumaritashvili] hit his head on one. He flipped right over the luge, his head went right into the column. It was so fast, about 12 seconds. And do you know how many people have been hurt, an Italian guy [defending Olympic champion Armin Zoeggeler] who had an accident, a woman who had a concussion [Romanian women’s slider Violeta Stramaturaru], and before this guy went to his fatal luge trip there were already people complaining about the luge, coaches saying it’s too fast, it’s the fastest luge in the world. [According to a CBC story: “The 1,450-metre course has 16 turns and drops steeply for 152 metres, the longest drop of any track in the world. The average grade is about 11 per cent, including two stomach-inverting drops of 20 per cent.”] Why would you have steel columns there? It’s like a bathtub, and then it’s got steel pillars. Obviously that would be their flip place. It’s just really gross.

SC: He was from Georgia, right?

LP: Oh yes. His family didn’t even know it happened and it was all over the papers. But he was only 21 and he’d only been doing this since 08. What kind of preemie was that to send out?

SC: Did you say ‘preemie’ [medical slang for a premature baby]?

LP: Yeah. I wasn’t sure if I said the right thing. If he’s going to wonder what I’m talking about or is he just going to disregard it. It’s pretty bad. This is Olympics is turning into a big disaster… Did I tell you about the protesters? They looked like the KKK in black. Why did they have to hide their faces? What are they hiding about? What’s with the black flags? The ones [protesters] on Commercial Drive were a bit creepy. [consults notes] Is that all? I’m sure I had more. [Reads notes] Oh, Trevor Linden, who I thought might be at the end, I was putting a wager on it but no one took it, I’m glad now, he did it already. Okay. So anyway the outfits were hideous. You know how in a crime scene, when they send people into the scene, they’re dressed in those white clown suits? They were, the torch people, dressed like that, in white, you couldn’t see their face ‘cos of the toques, then there was this little green and blue stripe that matched the truck, and those red gloves, so you could just see big huge hands, red gloves and white, then green on the sleave, lime green. Hideous. And then the bodyguards, I don’t know, they look like snipers, in jetblack jumpsuits. And I couldn’t figure out what are they are. They looked like, is it the IHIT [Integrated Homicide Investigative Team] squad, they’re in black too, they’re the ones who go and talk to gang members and get them out of clubs, on Granville. Then you had police on bikes, wearing yellow jackets. That you wear in the dark.

LP: Yeah, that’s it. What else. Oh it was funny! They got someone who was in good shape running, to make up all the time they’d lost from the others, she sounded really cute, you could hear her through the web thing. You know how Coca-Cola is sponsoring it, someone from Coke goes up to her with a can of Coke and she goes “No thanks!” It was so cute, everyone saw it was a can of Coke. That was funny. She wasn’t going to take any Coke. But apparently a lot of RBC folks are in it because they’re sponsoring it.

I’m pretty sure it’s going to be t last torching, Terry Fox and his mom.

SC: But who’s going to be holding the torch? A hologram can’t hold a torch.

LP: Huh. [considers] But how do you move something that doesn’t exist… Who told me this, this is stupid, this doesn’t make any sense. How would they light something… How can a hologram look real, how can you see it then, well I don’t know… What is a hologram.

LP: Anyway. They’re probably going to do it [the last torch] when I’ve fallen asleep.