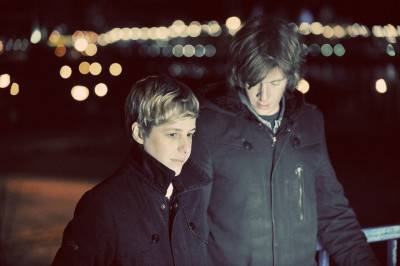 Interview – Kate Cooper of An Horse

“Discovered” by Tegan and Sara while working at a Brisbane record store, An Horse now finds itself straddling continents: drummer Damon Cox resides in Australia, while guitarist vocalist Kate Cooper spends most of her off-time in Montreal. Or, as the case may be, in the Montreal airport.

That’s the location we reach Cooper as she waits for a postponed flight (“because of overworked flight crews”) to Vancouver, where she is scheduled to rehearse with Cox prior to the first dates, Jan 5 and 6 at the Orpheum Theatre, opening for Tegan and Sara on the latter’s Sainthood tour.

Cooper and Cox, aka An Horse, also have an album to promote. Though the spunky (think Tegan and Sara, at least in Cooper’s vocals) Rearrange Beds was available digitally as early as Dec 2008, it’s just a few days old as a physical entity, at least in Canada.\ 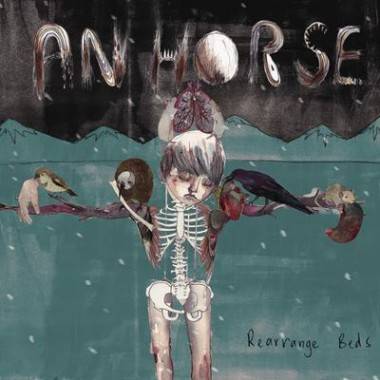 Shawn Conner: So you’re living in Montreal now? How did that come about?

Kate Cooper: I don’t really know. My partner lives in Montreal, that has a big part in it. I have a handful of friends here too. It just seemed easier than flying back to Australia after each tour. I really love it in Montreal too.

SC: You must still be collecting quite a few frequent flyer miles.

KC: Yeah, I’ve got a fair few. We’re actually going back in February after this tour to write.

SC: And the plan is to then record the album in Vancouver?

KC: That’s the plan. There’s a guy called Howard Redekopp, and we want to work with him and he’s in Vancouver. He mixed Rearrange Beds for us.

SC: But the producer is actually Magoo?

KC: Yeah, he’s an Australian guy, I think he did Redneck Wonderland [1998], which is a great record.

SC: You guys probably hadn’t even been born when “Beds Are Burning” was released.

KC: Just, I suspect. I was a little guy. But that’s a great record.

SC: Is Midnight Oil regarded as Australia’s answer to Tragically Hip or REM?

KC: Yeah, they are, they’re royalty. In fact their lead singer, Peter Garrett, is the Minister of the Environment, Heritage and the Arts in the Australian parliament.

SC: What were some of Australian bands you listened to growing up?

KC: I guess I was subjected to a lot of Cold Chisel, which is a pub-rock band, when I was growing up, my dad loves them. But in my teens I got into the Go-Betweens, who are from Brisbane. So I love them, I think they’re great.

SC: That would be a good band for you guys to cover.

KC: I’ve thought about that. But it’s too scary covering someone you love too much.

SC: Is there one song by then in particular you’ve thought of covering? “Streets of Your Town”, say?

KC: Yeah but you know if we did that and played that in Australia we’d probably get stoned.

SC: One of the Go-Betweens died not too long ago, no?

KC: Yeah, Grant McLennan, he was a friend of mine. It was terrible, a big shock to everyone in the Brisbane community. But it has family has done some great things, like setting up a Grant McLennan Fellowship Grant for young musicians traveling.

SC: So you were able to become friends with those guys?

KC: I knew Grant McLennan, I don’t know Robert [Forster], because I used to work in a music venue and I guess you just meet people, locals. And when you start playing music in a small town you kind of meet everyone.

In fact the last time I saw him I was playing with my old band play in a church and I turned around and he was kind of bathed in this glowing light and I remember thinking, holy shit, that’s Grant McLennan from the Go-Betweens watching me play.

SC: There’s nothing in the bio about you being in a band before An Horse.

KC: Yeah… It did some stuff in Australia, it was a band called Iron On, both Damon and I played in bands for years before An Horse, and then An Horse just randomly got busy kind of quickly. It took us both by surprise.

SC: The story goes you guys were playing Skinny’s, the record store where you worked when Tegan and Sara stopped by to do an in-store. How did they find out you guys were in a band?

KC: I was actually in my other band when I met them, about five years ago. They had a tour blown out, some canceled dates due to the band they were supporting pulling out of stuff, so they had a few days in Brisbane and just wanted to hang out, and we became friends and stayed in touch, and I would send what I was working on, and every time they came to town we’d hang out.

And it just so happens that one time when they came to town Damon and I had spent the day in the studio and they asked what I’d been doing, and I said ‘Well I have this unmixed thing if you want to hear it,’ and three weeks later, it was Christmas, and they asked if we wanted to come on tour with them in the U.S.