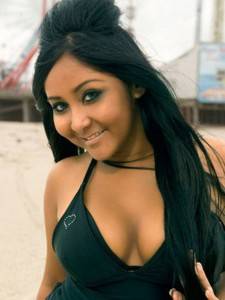 Twihards, watch out. There are some new weird obsessives out there now waiting to steal your creepy thunder, and they are much more devoted, nerdy, pervy and suicidal than you will ever be. Introducing the Avatards. They are blue, literally and figuratively, about the fact that Pandora doesn’t exist, and it’s draining their (presumably already weak) will to live. So if you have a tendency towards melodrama, Dungeons & Dragons-type gameplaying, Burning Man-esque values and fashion sense, and no real life, you may want to avoid watching this movie. Or just avoid watching it because you are cool and have many better bluish ways to spend three hours and 12 dollars; I recommend some Purple Indica, a Mr. Freezie and the BBC Blue Planet series.

To laugh or to cry, that is the question. Jersey Shore has been renewed for another season! This is good because who is ready to say goodbye to Snooki, The Situation and Pauly D? Yes, we’re totally ready to say goodbye to the rest of them, who can even remember their names? But it’s bad because they’ve already jumped the shark and done a self-mocking Funny or Die video, and it can only go downhill from here, and that’s saying a lot, as we know.

Kate Gosselin has started the new year with a new hairdo. This is good news for anyone who lackadaisically peruses tabloid covers at the check-out, or who is bored with the whole “Kate Gosselin is a horrible, shrewish harpy with a rabid possum on her head” refrain. It took 20 hours to get all the extensions on; how much would that have cost? It’s astronomical! Anyways, it was worth it, she DID look like she had a rabid possum on her head, and she has enough problems without vicious-rodent-hair. For instance: eight kids, and an ass-hat ex-husband who will never ever pay child support because unfortunately you don’t get paid for being absurd.