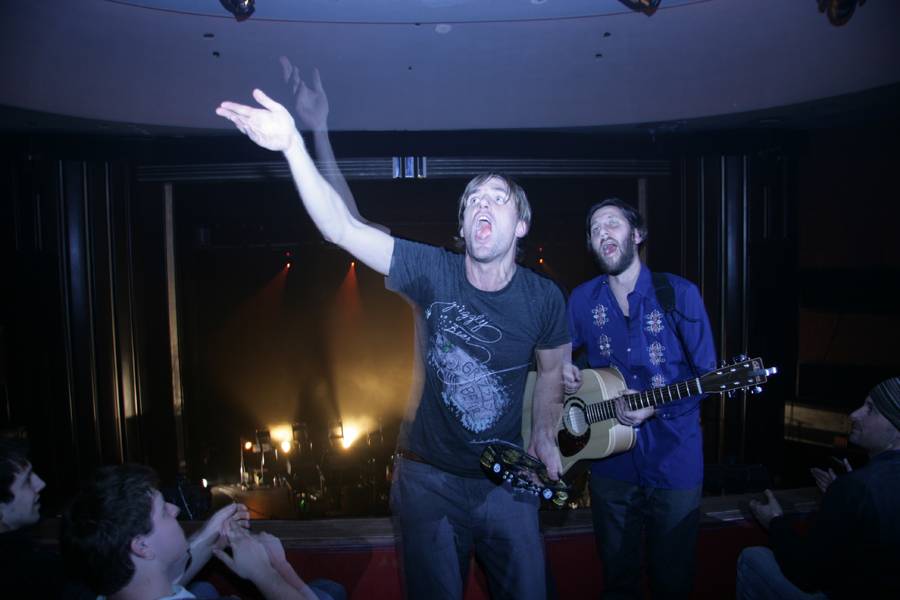 In the cavernous yet intimate milieu of the Vogue Theater, robust and benevolent tones from a single piano coalesced into the song “The Great Escape” from Patrick Watson‘s Polaris Prize-winning 2007 album Close to Paradise.

Curiously, though, the band named after the Montreal singer was nowhere in sight. The frontman had decided the song should be played in the darkness – complete and sullen darkness. Decisions like these, seemingly, are made so the audience can experience something extra from the song, and are made by artists – Watson,Â along with guitarist Simon Angell, bassist Mishka Stein, and drummer extraordinaire Robbie Kuster – who appreciate the various layers of their work.

Starting the evening, and setting a comfortable “we’re all friends, let’s get to know each other” vibe, Aidan Knight charmed the audience with his awkward humour and admitted love of cereal. Accompanied by Vancouver singer/songwriter/guitarist Jonathan Anderson, Knight admitted to his nerves about playing at a sizable venue for a substantial crowd, and opening for an already-popular-overseas band.

Nevertheless, the Victoria, B.C.-born and -raised musician played a winning mix of love ballads with self-described “monster riffs,” including the song “Jasper”, a set highlight containing winsome harmonies and the inviting sounds of a lap steel.

With the energy level high, Patrick Watson and band came out and quickly demonstrated their musical diversity. Kuster’s kit was an unusual set up of standard and full-bodied Gretsch drums supplemented with cowbells, a saw, and what sounded like pots and pans all placed accidentally/on purpose within each song, adding a certain je ne sais quoi to the music.

Angell’s musicianshipÂ  included the use of a balloon, while Watson warped and looped his voice, used a megaphone, or merely stepped back and bellowed into the microphone at a distance. Joining the band off-and-on through the set was a 4-piece string section, aka “the mommies on the run” [see our interview with drummer Robbie Kuster], and which added further character to songs like “Beijing”.

For an exceptional encore, Patrick Watson donned a makeshift contraption resembling Medusa’s hair of snakes: a mechanism comprised of five megaphone heads that straps on the user like an everyday backpack and allows the wearer to wander among the audience for an even more intimate experience. Amidst the finale “Man Under the Sea”, we all found ourselves singing along to the words, “just me, the fish, and the sea.”

In hindsight, the band’s shorter set left the audience as satisfied as after a savoury, relaxing, and sublime meal: not too full, but not starving. Instead, the proportions were just right, and no doubt left many humming the hauntingly enchanting tune “Wooden Arms” on their journey home to be engulfed “into a thousand dreams.”

One response to “Patrick Watson at the Vogue Theatre”