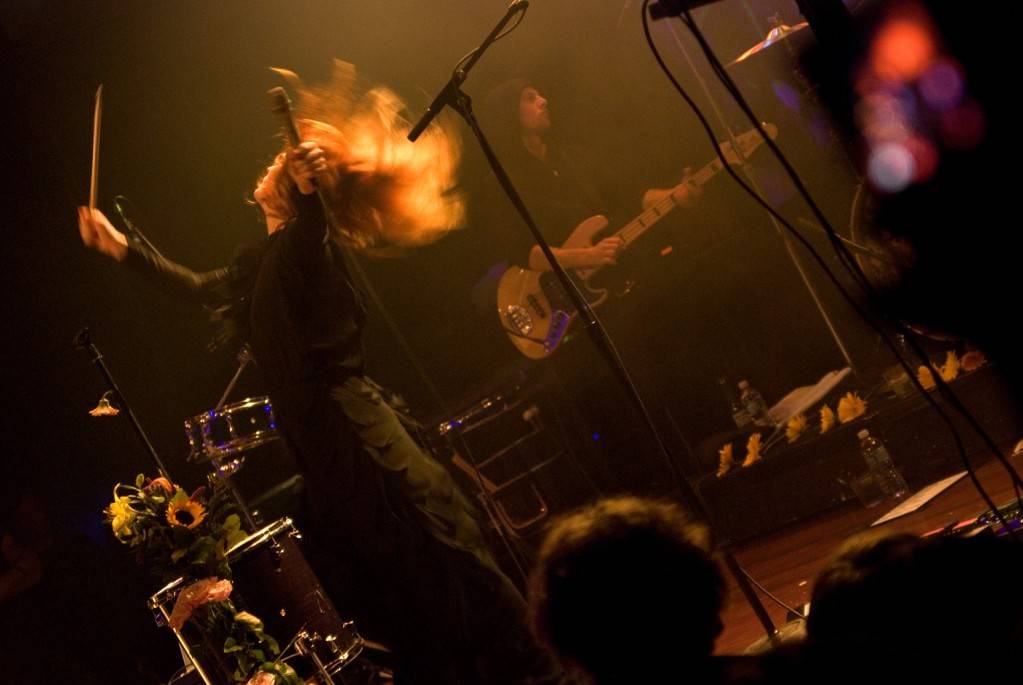 Review and photos – Florence and the Machine at the Mod Club, Toronto, Nov 2 2009

Besides the obvious fact that this show was sold out, other clues helped lead me to the conclusion that Florence and the Machine at the Mod Club was a highly anticipated show for a lot of people.

First off, as is my tradition, I like to talk to ticket scalpers to see exactly what value my original investment has gained. This also is a pretty accurate system for measuring the hype in the city surrounding the event. Our girl Florence Welch comes with significant buzz that translated into triple the original value for tickets to this sold-out performance.

Small, gritty, intimate, the Mod Club seems to be an ideal venue for a band like Florence and the Machine, which is fronted by a singer/songwriter who defies all things pop and mainstream while creating new trends all on her own. Still cutting her teeth in the North American market, it’s clear Welch has a strong base of fans from all walks of life. The crowd at this show was as diverse as they get.

Opening for the British act was local band Pony Da Look, a group of female keyboard artists. Their repetitive, hypnotic beats were a little lost on myself but seemed to be enjoyed by the majority of the crowd. 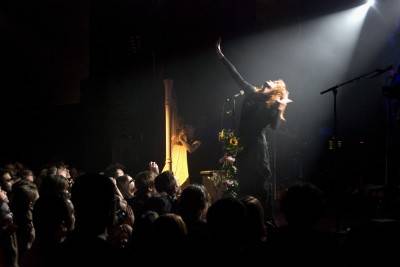 Florence and the Machine at the Mod Club, Nov 2 2009. Amber Anne Dawkins photo

There were a few instances when the powerful organ effects drowned out the vocals and grated a little on the senses. I will say however, they did incorporate some unique sounds in their performance. Plus, anytime you break out a recorder solo, good things are bound to happen. The three frontladies are Temple Bates, Amy Bowles, and Catherine Stockhausen. I believe they had someone filling in on percussion whose name I was unable to catch.

Florence and the Machine greeted their loving Toronto fans with a hard-hitting pener of “Between Two Lungs”, “My Boy Builds Coffins” and “Kiss With a Fist”. This last, the single that broke the band in North America, sent the audience into a frenzy.

After that, it was clear that all the hype and anticipation had been justified, and we were all in for one hell of a performance. A sense of genuine raw passion comes through in Welch’s performance, and it took no time for her to hit her stride on this last stop on her first North American tour for the band’s debut Lungs.

All that aside, this lady can really sing. When she’s in full body convulsions while banging away on the floor tom beside her mic, one can’t help but feel how much fun she’s having doing what she loves. In an industry with its fair share of superstar wannabes, it’s refreshing to see an artist perform from the heart and strike the right chord with the audience. It’s genuine and it works.

As far as stage presence is concerned, the bands name is indicative of their contribution. You won’t see a lot of jumping around or total rocking out coming from the members. This is preferred, as the frontwoman had more than enough presence to keep the audience’s total attention.

After a gracious thank-you, Florence and the Machine treated us to “Are You Hurting The One You Love”, a track not on the debut, before getting back to the rest of the songs from Lungs: “Hospital Beds”, “Hurricane Drunk”, “Howl”, “Drumming Song”, “Dog Days Are Over”, “Cosmic Love” and “Blinding”.

For its encore, the UK group unleashed “You’ve Got the Love” and “Rabbit Heart (Raise It Up)”. All in all, it was a killer show.

One response to “Florence and the Machine at the Mod Club, Toronto”