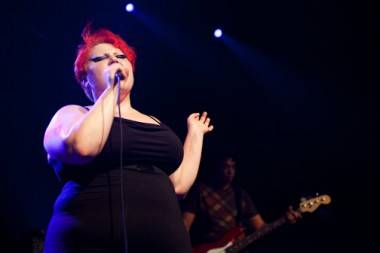 The first thing lead singer JD Samson (Le Tigre) proclaimed from the stage was, “We are Men, and we are from New York.” This was obvious–they oozed Lower East Side cool from the moment they stepped onstage.

In a baggy-shorts-and-T-shirt ensemble, Samson was looking like a mid-1980s Keith Haring Pop Shop holdover in red shoes (which the author thinks everyone should make a point of owning). She was flanked by MEN Michael O’Neill and Ginger Brooks Takahashi, who from a distance resembled Life of Brian-meets-Clockwork Orange castoffs in tight grey bodysuits, chainmail hoods, and exaggerated eyeliner. This mÃ©nage a trois, outnumbered onstage by their instruments, proceeded to rock harder, faster, and tighter than any trio I’ve heard recently. 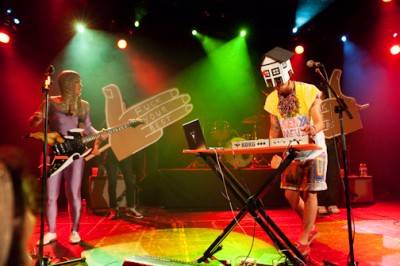 At one point Samson inexplicably donned some sort of house-shaped hat contraption, giving the impression that MEN moonlight as the house band at the coolest underground joint in Emerald City. Takahashi would later inform me that rather than being a product of Manhattan’s LES (Ã  la Lady Gaga) as I had previously thought, they actually hail from an L Train subway ride away–the magical land of all things Ã¼bercool, Williamsburg, Brooklyn. Ah, well, that explains it.

Samson has a great voice; fiercely feminine with a crisp sharpness and attitude reminiscent of Pat Benatar or Debbie Harry at their best. There’s no room for error here–the sharp drum tracks, rhythmically perfect ’80s synth club beats combined with a hard, New Wave-heavy guitar overlap was technically, sonically precise. This is music one needs to be on the dance floor to hear and, more importantly, feel. And damn it if it didn’t feel good. Real good. 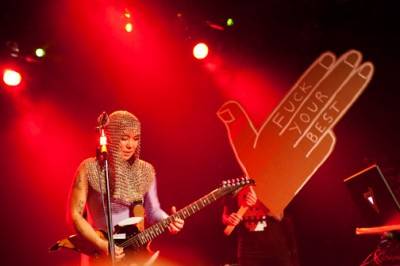 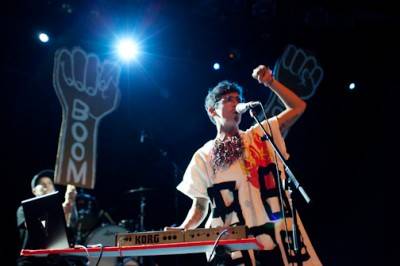 Beth Ditto, the enigmatic front woman of Gossip–known as much for her Rubenesque physique as for her outspoken opinions on mainstream, cute-as-pie rock starlets–is probably bigger than her band. And by bigger, I mean famous.

An interview with the British magazine Attitude coincidingÂ  with the June, 2009 release of Gossip’s third album Music for Men was the catalyst behind the last round of Ditto’s “controversy.” In it, she criticized singer Katy Perry when she stated that, as an openly gay woman, she found both Perry and her hit single “I Kissed a Girl” to be “offensive to gay culture.”

It doesn’t really matter, because her fans get it. These people–her people–wouldn’t be caught dead listening to Perry for the same reason there were fewer straight boys in the audience at the Commodore for Gossip than one would expect to find at a Perry show. To her fans, Ditto is more than just the lead singer of her band; she’s a hero. Just remember who rocks harder, boys.