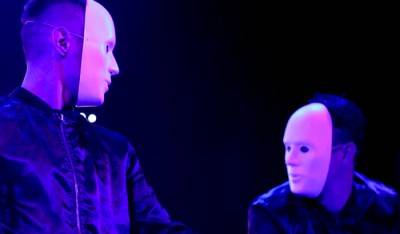 Christian Karlsson and Pontus Winnberg, also known as Bloodshy and Avant, are the group’s core; they’ve written and produced for Kylie Minogue, Madonna and Britney Spears, as well as singer/songwriter Andrew Wyatt. The duo came out with faces hidden by white ghost masks, like the Joker’s wrecking ball crew or A Clockwork Orange’s milk-happy droogs and dressed in black shiny nylon clubhouse-style sleek bombers and blue jeans, giving them a quasi greaser-moderne feel.

By track three, the frontmen had taken off their masks. I have to say I wasn’t actually a witness to it, which kind of amazed me – I, the oh-so-jaded, malcontent was actually so absorbed by a performance that my typically impeccable observational skills were successfully impeded for a few moments. Hats off to you, Miike Snow; I was actually enjoying myself. Hot damn!

To exact their sonic assault, the seemingly sensitive pop scientists utilized many an electronic gadget, but a few “organic” instruments, including guitar and drums, added a certain warmth to the Snow’s emotional, silvery pop.

While I had never even heard of this act until a day before the show, I was really impressed. The songs were catchy and recognizable without being annoyingly so, while the Swedish gang of lads’ trendy dance/electro/pop landscapes brought to mind an amalgam of Coldplay, Depeche Mode, Sigur Ros, Duran Duran and the Police.

The five-piece also played as though they really dug what they were doing, without being precious about it. The only drawback of the night was that the teeming and ever-enthusiastic crowd wasn’t given an encore. The screaming, wailing, clapping, and adoration was all there, but the band simply did not oblige. Perhaps it is their heavy touring schedule, or the hype, who knows, but it seemed to be a bit of a letdown. Audience members who caught me taking notes even remarked, “Hey I thought it was a great show, but like, no encore, that is pretty lame, and you should mention it.” So I am.

I really did think the show was great, and being a musician myself I do understand that sometimes, even with an audience going bonkers, with so many shows ahead, you just want to be done. That said, if the crowd is really “loving it,” as this one was, give them an encore. How hard is it to play one more song?! It just seemed a little cold – a little Miike Snow-y, if you will.

That said, I would definitely see the band again. Which, for me, is saying a lot, as I am kind of a bastard.

3 responses to “Miike Snow at Venue”