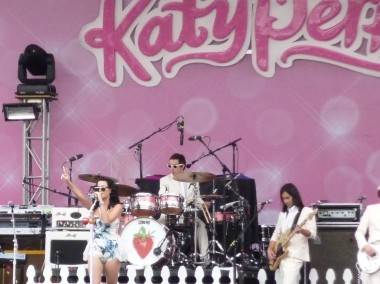 It’s fitting that the word “bumbershoot” is slang for an umbrella, because this year’s Bumbershoot Festival was a soggy, muddy mess. Not that the weather stopped anyone. As Vancouverites are well aware, folks on the coast have webbed feet and are well used to the unpredictable weather.

Held every year on the Labour Day long weekend for the past 39 years in Seattle, the three-day music and arts festival (the largest urban arts festival in North America) occupies 74 acres of space in the city centre, directly under the Space Needle.

With venues hosting not only music, but comedy, dance and performance, films, literary arts, theatre, visual arts, markets and other entertainment, one could end up feeling mildly schizophrenic trying to accommodate it all.

Highlights from this year included:

Katy Perry – After enduring the screams of an audience too young to understand that the many people entering and exiting the stage prior to the show were sound crew and not Katy Perry each time, the star of the show finally skipped out wearing a cream body suit and half a tutu bouncing off her rear and carrying a massive blow-up strawberry. Accompanied by her band, all wearing matching cream suits, she started off with what sounded like a few warm-up songs and then dove into “Hot N Cold” and “Ur So Gay”.

With dance moves, twirls and leaps that look like something out of an aerobics class, Katy not only has saucy style, she has a big, bold gospel-ish set of pipes and can give Avril Lavigne a run for her money on the guitar.

Standout moment: after one particularly vivacious song Katy delightfully shared with the crowd: “My boobies almost fell out on that one.”

Adrian Xavier – An unmistakable shift from Katy Perry, this Seattle-based reggae act gave crowds as good a reason as any not to sit on the soggy grass. The sound was a great combination of beats mixed with violin riffs. Taking the usual festival opportunity to talk politics, the group launched into their song “Progressive People”, addressing environmental issues and  injustices.

Food for thought: “More people are prepared to live on Mars than on this planet,” Xavier said at one point. I wholeheartedly concur. 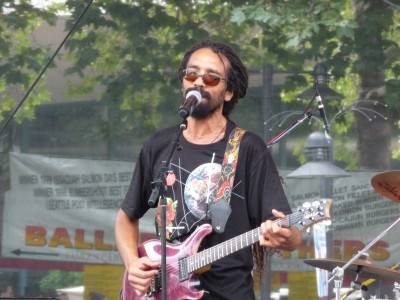 S.E. Hinton – Hinton talked about authoring literary classics The Outsiders, Rumble Fish and Tex, and what it was like throwing in her two cents on set while directors Francis Ford Coppola and Tim Hunter turned her pages into films.

Highlights included comments on “how weird Nic Cage [star of Rumble Fish] is and always will be,” working with Coppola on set – he was “too deep” for her – and being the “Greaser Den Mother” to a bunch of young actors. “By the end, I felt like an old dog with used tits dragging down the street.”

Hinton’s first royalty cheque for The Outsiders was a meagre ten dollars; its popularity grew slowly through word-of-mouth by teachers and students. Hinton was just 15 years old when she began writing the classic. Not bad for a first book.

Shockers: Many people are still surprised to find out that the author of a male coming-of-age literary bible is a woman. 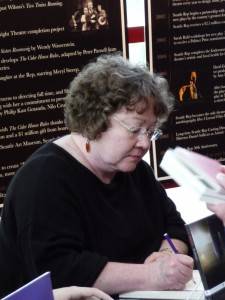 Os Mutantes – This veteran Brazilian act has weathered psychedelics and military dictatorships that date back to the ’60s. Apparently during an extended breakup in the ’90s, Seattleite Kurt Cobain wrote the band requesting they tour again. Their sound is Portuguese Paul McCartney with ’60s surfer tones and Hendrix riffs.

Flashback: It is evident these mutants have been smoking something for decades as lead singer Sergio Dias commented on the glowing Space Needle, “There is a UFO standing [??] out there. How do you guys get used to that?” They have just released their first album in 35 years titled Haih Or Amortecedor. [For more on Os Mutantes, check out Adrian Mack’s review of the group’s Vancouver show here.]

Black Eyed Peas – The Peas dominated the stage with lightning bolt electric guitars and dancing transformer-like robots. Playing hits like “Let’s Get It Started” (with the original lyrics), “Shut Up” and “Don’t Phunk With My Heart” early into the set, lead booty-shaker Fergie encouraged fans to crowd surf and to watch out for the ladies getting squished in front of the stage. The energy was high and the Black Eyed Peas gave one heck of an entertaining show, but I could have done without the Auto-Tune vocals and Fergie sounding like she just sucked a helium balloon.

Highlight sound: electric flute on “Don’t Phunk With My Heart”. 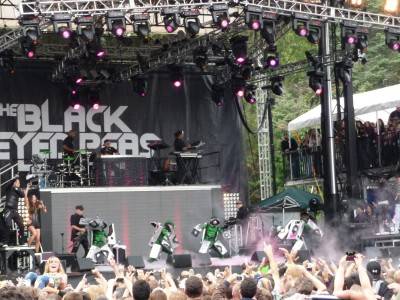 DASSdance – This local company’s performance about water conservation was held in the centre of the festival grounds under and around the planetary-like International Fountain. Dressed in shredded neon material and knee pads, the eight-person troupe performed their “Fighting Water” piece as a full group, individually and in pairs as they moved, tumbled, play-fought and slithered erotically through the spray. Unbelievably hypnotizing, this group drew crowds twice a day for each of the three days during the festival. 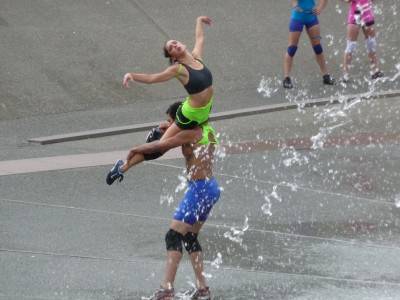 Sheryl Crow – In anticipation of seeing Ms Crow, I recently blew dust off my Tuesday Night Music Club and self-titled Sheryl Crow records so that I could relearn the words to the songs on her two best albums. So I was fully prepared as she belted out “A Change Would Do You Good”, “Leaving Las Vegas” (which she dedicated to the drinkers and pot smokers of Seattle), “Strong Enough”, “Good is Good”, “Can’t Cry Anymore”, “Hard to Make a Stand” and a cover of Cat Stevens’ “The First Cut is the Deepest”.

In between songs, she gave props to all the great music and musicians that have come out of Seattle, including two at the top of her list – Heart and Eddie Vedder.

Political moment: On a more sensitive note, she commented on the recent defacing of posters in the United States depicting President Barack Obama as Hitler. “I hope you pull them down, whether you believe in Obama or not. We all know who Hitler was and no one in this country is like Hitler…at least we hope not.”