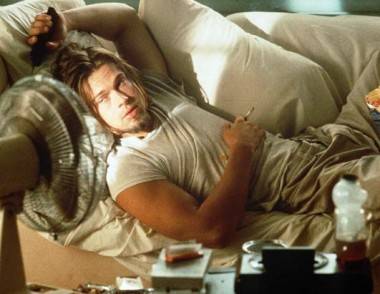 Just as many great actors and actresses toil in obscurity playing side parts because they aren’t blessed with the face to be Hollywood matinee idols or ingenues, Brad Pitt’s looks have actually hindered his career as an actor, locking him into leading man roles in mediocre Hollywood nonsense – see (or rather don’t see) The Mexican, Mr. & Mrs. Smith, The Devil’s Own, Seven Years in Tibet, Legends of the Fall, and Troy – when he should have been spending his time cultivating his abilities as a quirky supporting player.

Call it the Curse of Brad Pitt: being a character actor trapped in the body of a movie star.

In honour of the release of Pitt’s newest movie, Quentin Tarantino’s Inglourious Basterds, about a squad of Jewish-American soldiers sent behind enemy lines to scalp Nazis during World War II (a movie that is, by the way, the ultimate example of cinema-as-wish-fulfillment-by-proxy for me and, I imagine, thousands of other Jewish men raised on a steady diet of Hebrew-school Holocaust documentaries and ultra-violent movies by directors like Mr. Tarantino; if it had come out 25 years ago, I would have probably formed my own band of Basterds and roamed the woods behind my school with baseball bats), we give you a list of Brad Pitt’s best performances – all quirky character roles and best-friend second leads – as a way to prove that even the beautiful among us can be damned by fate to lives that are not their own.

12 Monkeys – In Terry Gilliam’s twisted exercise in time-travel dementia and late-20th century eco-paranoia, everyone is out of their heads, from Bruce Willis to Madeline Stowe to Director of Photography Roger Pratt (who is more in need of a level than any filmmaker since Carol Reed made The Third Man). But Brad Pitt is madder than any of them.

Taking a cue from Dennis Hopper’s unhinged performance in Apocalypse Now, Pitt plays psychotic heir Jeffrey Goines as a whirligig of gesticulations, sudden mood shifts, flailing hands, bug-eyes, narcissism, cackling indignation, and terrifying monomania. Bouncing off the walls like Daffy Duck, Goines is tapped into the absurdity of the world, less insane than he is merely convinced of the delusions that pass for reality in his head. Realizing that Goines was the perfect stand-in for Gilliam himself – a trickster mocking humanity’s self-importance – Pitt probably figured he had free rein, so he turned his mind to thoughts of scenery-chewing and stole the show. 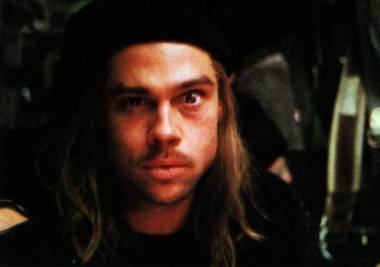 Snatch – Proving that you can be the most engaging actor in a movie even when everything you say is incomprehensible, Pitt took Guy Ritchie‘s otherwise lightweight second movie and gave it heft. Which is not easy to do with a Ritchie film. Just ask Pitt’s co-star Benicio del Toro, who knows a little something about giving movies heft but gets swallowed whole by Ritchie’s MTV editing style and rococo dialogue.

The truly brilliant thing about Brad Pitt’s performance as Mickey, the hard-drinking gypsy bare-knuckle brawler with a tattoo of the Last Supper on his back, is that he’s a heavyweight champion mumbler in a universe populated entirely by enunciators. In Ritchie’s cosmology, every word, no matter how vulgar or violent, is approached with the utmost care and reverence and with the maximum number of ellipses possible while still maintaining viewer attention – “ Why the fuck… did you put Gorgeous George… into a bare-knuckle boxing match… two days before he had to fight the Bomber?”

Mickey, however, speaks in a gumbo of English, Irish, Scottish and God knows what other accents, throwing reverence for diction out the window. And Pitt, realizing how ridiculous it is to play a character who can’t be understood, decides to go all the way ridiculous, until his voice becomes more a musical instrument than a tool of communication. By selling himself as the polar opposite of every other actor in every other Ritchie film, Pitt turns his character into the greatest of all Ritchie creations. 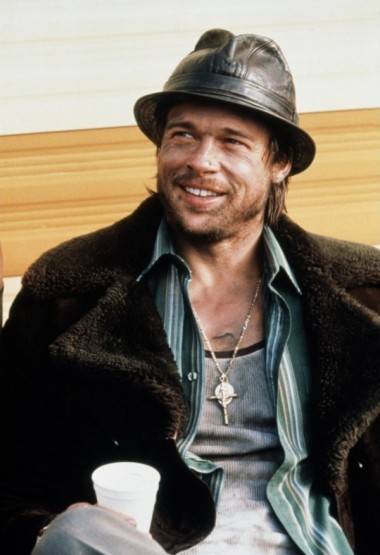 But it’s Pitt, as the pot-addled roommate Floyd, who manages to steal the film. Normally I find stoner humor to be the cheapest form of comedy – just a bunch of clichÃ©s you can call on to get easy laughs from people who are probably stoned themselves and will therefore laugh at anything you say; hence my indifference to Pineapple Express – but Brad Pitt is brilliant as a hippie with a bitter streak and a tongue he can’t quite control (witness him turning “condescend” into “con-den-scend” with all the agility and grace of a figure skater on muscle relaxers).

Unlike most stoner characters Floyd feels like a fully formed creation. Which is amazing when you consider he’s only onscreen for about five minutes. But in that time, Pitt comes up with dozens of artful little moments and lines that speak to a vast, if confused, inner life, like when he asks a hitman (played by James Gandolfini) if he’d like to wait with him and watch TV rather than go out hunting for the people he’s trying to kill. Or when he tries to give directions to four mob guys with shotguns – “Go down Beechwood and drive awhile and then you’re gonna turn right, okay? And then you go and you keep drivin’ and you keep drivin’…” Subtly played all the way, Pitt’s performance has become the gold standard for all actors looking to become the next Jeff Spicoli, only better.

Ocean’s 11 – For an actor, the team-of-guys-on-a-mission genre is a tough one to make any sort of impression in. For one thing, you’re surrounded by no fewer than six and sometimes up to 15 of your fellow male movie stars, all of whom are fighting for lead-role status. (Can you imagine what it must have been like going to work every day on The Dirty Dozen, trying to outshine Lee Marvin, Ernest Borgnine, John Cassavetes, Jim Brown, George Kennedy, and Donald Sutherland?) Second of all, these movies aren’t character pieces; they’re action-driven. So any psychological subtlety an actor indulges in will most likely end up on the cutting-room floor if it gets in the way of a fire-fight. Between all those actors on set and all that action in the script, it’s not easy task sticking out.

But it is possible. James Garner did it in The Great Escape. Yul Brenner did it in The Magnificent Seven. Steve McQueen did it in both. But it takes a special kind of actor to square off with George Clooney, Julia Roberts, Carl Reiner, Don Cheadle, etc., etc., and come out on top like Brad Pitt does in Ocean’s 11. 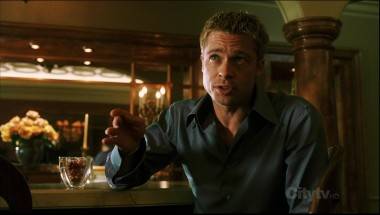 Which he does by giving the most laid-back, naturalistic performance of his career. No wild gesticulating here, no crazy accents or druggie affectations. Just the confidence that comes from knowing you’re playing the second lead in a cast of thousands (meaning you’re a huge, bankable star that every woman in the world wants to sleep with but the movie’s success isn’t dependent on you), you look good in suits, and you get to play bemused in a movie built on tension.

Pitt seems to be enjoying himself in Ocean’s 11, as if he’s aware of how ridiculous it is to get paid as much as he does to be a part of something so fun surrounded by as many stars as he is. He luxuriates in the little quirks that give his loosely drawn Rusty Ryan life: I’m thinking mainly of his tendency to always have a sandwich or nachos in his hand, an actor’s tribute to the calling-card approach of other great cinema criminals – in particular, George Raft’s coin-flipping Guino Rinaldo in 1932’s Scarface – that draws just enough attention to itself to give the character life. Rusty – like Goines, Mickey, and Floyd – is proof that when he takes the right roles, the smaller roles, the supporting roles, Brad Pitt is as good an actor as anyone working.

Just imagine how great he could have been if he’d been born ugly.

2 responses to “The curse of Brad Pitt”