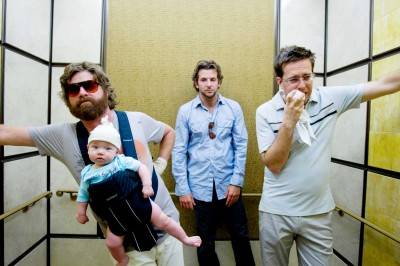 The rest of the film, in keeping with the tradition of (ahem) classics like Dude, Where’s My Car?, follows the hapless protagonists around the bizarre wonderland that is Las Vegas, as they try to piece together their shattered memories and find Doug in time for the wedding. Just as you know that the pristine vintage car loaned to the crew by Doug’s soon to be father-in-law (Jeffrey Tambor, awesome as ever) will never survive intact, you can expect clichÃ©s like hookers with hearts of gold (Heather Graham, playing the exact same character she always does).

The first half of The Hangover cruises on the strength of sheer anticipationÂ -Â there are more than a few “Seriously, how the fuck did that happen?” moments. Towards the end of the film, though, as inevitable resolutions are reached, the pace starts to lag a bit. It seemed that the writers got most of their chuckles thinking up impossible situations, but didn’t bother to find solutions that were more than momentarily amusing. There are a few choice lines that still have me giggling, though – mostly those uttered by Galifianakis. 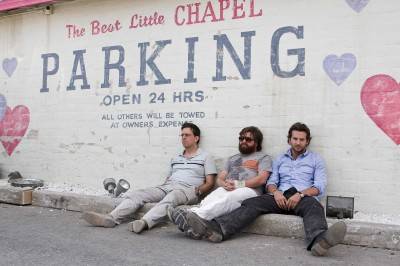