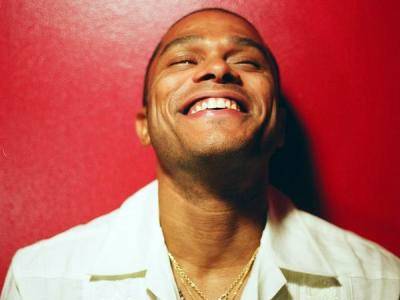 If you haven’t thought of Maxwell in awhile, you’re not alone; the R ‘n’ B singer dropped out of sight, more or less, following the release of 2001’s Now.

Maxwell’s Urban Hang Suite, his 1996 debut, had put the singer at the top of the charts, and a follow-up unplugged disc (remember those?) gave him a huge crossover hit with his version of Kate Bush‘s “This Woman’s Work”. Yet all that wasn’t enough for the big M, oh no!, and a couple of albums later he decided to duck out of the music industry to “lead a normal life”.

Anyway, Maxwell’s back and about to release (on July 7) BLACKsummers’night, which he’s calling the first of a trilogy, and its lead-off singles “Pretty Wings” and “Bad Habits” are reminding people of what they liked about his smooth delivery in the first place. WeÂ reached him in the midst of rehearsals with a ten-piece band for his upcoming tour…

Shawn Conner: So what’s a normal life for you?

Maxwell: Who can say what normal is in this day and age? But I think not having the expectation of releasing an album and just making music from that place of, I just want to make this song, with nothing connected to that – where will it go, will it chart. Just making music for the sake of it. I think that’s normal, for me. When I’m in a situation where I’m running wild in terms of interviews and it’s likeÂ Groundhog Day when you’re on the road and there’s that certain hour of the day, everything is wrapped around that hour-and-a-half where you have to be onstage, so normal for me is not having that. Where 8:30 is not a big deal, it’s time to watch that television show not gargle with salt and what have you.

SC: So what makes you different that you can walk away from something people strive for all their lives?

Maxwell: I just think it’s real to be that way. I don’t fault anyone in the industry that chooses to release records all the time. I know a lot of people who do it, a lot of hip-hop artists are very consistently releasing records. It depends on who you are and what makes you happy. For me, fame is just a byproduct of my real joy, which is music. I’m not seeking fame or celebrity. It’s a very dangerous cocktail. It’s like fire, almost. You’re bound to get burned.

With the music, there’s always a reward. With fame it’s really conditional, it’s very fickle. It depends on who’s out at the time you’re out, and if someone’s singing is better than yours, then you take the backseat, then they go away. Then you maybe come back. It’s a weird spectator-sport kind of vibe. And music for me is not a competition, it’s more of a contribution. I feel blessed and humbled to be in a situation where people are waiting to hear something I’m doing. I still can’t get over it after all this time. But the time away made me appreciate it more. That’s how I want to stay – appreciating the opportunity. You do lose that after awhile if you’re doing it too much. Anything you do too much, anything that’s always happening, it loses its resonance. I’m glad that everything is back to that feeling of wow, I’m about to put out a record. I feel like I did when it was the first time.

SC: Must be a little bit nerve-wracking too.

Maxwell: The value of music has changed considerably, what people think it means to buy a record or a song. It doesn’t compare to buying a cellphone or computer. Computers are seen as a lot more important than music. [Phone rings, I’m put on hold for a few seconds, Maxwell comes back.] I’m sorry about that.

SC: While we’re on the subject of how things have changed, I imagine it’s different from watching from the sidelines as it were, and then being immersed in it.

Maxwell: The only way I can fight the good fight against the well well well and much-needed change – change is healthy it’s always good, it’s how you react to it that shows whether it’s negative or positive. I just want to put albums out and go on the road. That’s my main thing. Put a record out and bring it to the people. Whatever else happens and doesn’t happen, I’ll be satisfied, ‘cos at least I was being a messenger of sound on some level. I can’t say if my record will be some huge big blockbuster selling every minute of the day. Who knows? All I know is, at 8:30 or so, no matter who’s in the hall, one, two, two thousand, two hundred thousand–that means something to me. That’s all I can do to set a tone for those who are going to come after me.

Maxwell: Yeah, well, you can definitely take that if you want it. It’s so bizarre. When people feel like they can just reach you, and then they have great anonymity. I don’t necessarily have anonymity on the Internet. If I do a page, it’s my page. I’ve had situations where people aren’t even real people, it’s one person pretending to be eight different people just to bombard me with whatever. But I’m not in that game anymore. I just get onstage and I live in the real world.

SC: The story I’ve heard, BET contacted you about being on a tribute to Al Green, and that’s what gave you the hunger again.

Maxwell: I can say part of that is definitely true. That came before anything in terms of the tour. But we were planning a tour, I knew I needed to do that first before the album came out. There were a lot of people to thank, to meet again, to even just say hey, this is me now, kind of vibe. But BET really came at the perfect time. It was a no-brainer. To do anything involving Al Green is a life-changing experience. And coupled with the fact I’ve been good friends with Stephen Hill [producer] for a long time, and he’s the reason I did an unplugged record, and why “This Woman’s Work” was part of that, I picked the cover myself, he didn’t know what we were going to do, but that cover was on that show, and it sort of put my career on a whole other level. In the same way, he calls me, says “I’ve got this tribute for Al Green. You think you want to do it?”

I wasn’t sure at first, because how can I sing an Al Green song. I mean it’s Al Green, you know? I was so weird about even trying to do covers that are specific to my genre in some way, because I feel there’s no way I can really compete, nor should I, with Al Green. We did it, I knew his album Lay It Down was out at the time, and I could see how it was going to help his whole process to be involved with that. I’m just happy it went on. I haven’t seen the performance, I’m not really big on reading about myself or watching videos–it’s like that weird feeling when you hear your voice on the answering machine. You’re like, that’s how I sound?

SC: Speaking of “This Woman’s Work”, did you ever hear from Kate Bush?

Maxwell: As a matter of fact, I did. She sent me a really nice note that I’ve had framed.

SC: One song on the upcoming album that I’m curious to hear is “Phoenix Rise”.

Maxwell: Hmmm. It’s an instrumental, it’s at the end of the album, it’s got really fast drums, almost like early ’90s kind of fast, and then it kind of goes into a half-time blues thing. It’s kind of a hint of the next installment, of what I’ll do on the next record. It’s a jam, basically.

SC: The other two records, how much of those are written?

Maxwell: All of them are written. I’m sure what’s going to happen is, I’m going to want to refurbish a little bit, especially with the new band. We’re going to throw the new songs in, probably towards the end of this tour. There are a few legs. This one, then there’s an arena run. I think towards the end, when we come back to America, If we can, if we do, that’s when we’ll probably throw in a few songs from the second installment. I’m sure people will be curious as we’re approaching that release date. But yeah, most of it’s done.

SC: By that time you could be ready to lead a normal life again.

M: Hopefully I’ll be married, kids, by then. When this is all done it would be great to ground myself in the family thing. I’ve been a bachelor for too long. I’m done with it being all about me. That’s the one thing about walking away. It didn’t’ have to be about me all the time, pictures of me, songs I’d written. Sometimes I get over myself. That’s why I’m always intrigued when people can consistently be out there. I kind of admire them a little bit. For me, I just have to get out of myself a little bit.

SC: It can lead you down some pretty narcissistic paths.

M: Absolutely. It’s definitely a rush in the beginning but I’ve been doing it for awhile. I didn’t really retire, I didn’t make an announcement because I think that’s crazy because then you’re kind of going against it. But when you look at someone like Bob Dylan, who took a long hiatus, and had some kids and lived in the woods or whatever, I think that’s real. I think those kind of artists make me go, wow, this person’s real. They’re not like a robot, a mannequin the record company locks up in a glass box then lets out for appearances.

4 responses to “Maxwell’s back with BLACKsummers’night”