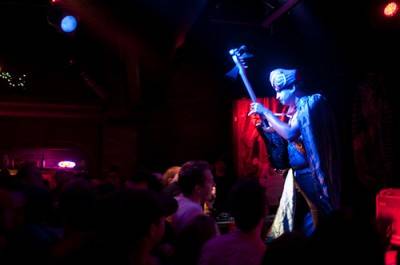 i don’t know any of the songs. not a one. it began in dirge slow, ly grinding who’s minding backward thinking to No Means No at The Park Theatre their meadow,lark (ho-hum) of a first song and then The Explosion and the best show i experienced that month. whatever that month was. March? Same/Same first song deal King Khan and the BBQ Show here’s what i know, the mosh pit was ferocious all the alt rockers and punk rockers movers(N)shakers there too, pushing,shoving,pressing to the front of the stage a perfectly formed rage bodies surfing including a Load heaved and hoed until he collapsed his struggling supporters overwhelmed splat attack! guys climbing the stage (security ready to pounce) diving back and surfing safely away there was a big guy who crawled onto the stage early in the set i thought it was part of the BBQ Show apparently i was not alone nope, he was on dope “did you see the size of his pupils!” says the sound tech by the stage. slithering along the stage until; The King signaled “who’s he?” that’s when Security Gigantic Man missioned on stage and twisted the doper’s wrist (this was repeated later in the set) 16 songs in 16 minutes (i tend to exaggerate) this is garage! 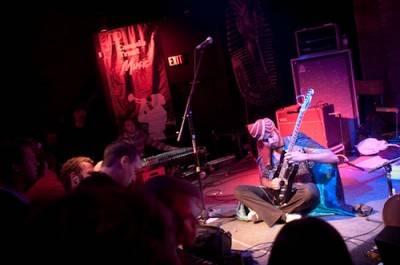 16 songs in 32 minutes? 34 minutes more likely. blistering pace, few words spoken i’m dancing like there is no tomorrow (and if you think about, really consider this, there may not be…) (we’re dead a good long time so ya better get to what you wanna do) i’m PourInG sweat (this is very common) “you inspired me to dance!” says the gorgeous blonde with her handsome man as he shook my hand. we talked about dancing beautiful dancing on the edge of the surging insanity we agree the random violence of the mosh pit is too much i Loved ten songs! this i know by the “Hot dancing!” “So hot!” notes. whew! i wrote something down between pouring it all out check this out, i wrote, “gorgeous ballad” the 10th song of the set. ! King Khan :blesses; (dipping guitar neck over their heads) the rockers hard,pressed and plastered to the front of the stage 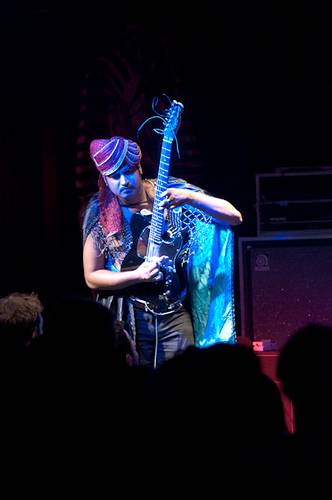 everybody’s happy ecstatic bouncing steps leaping out of Pyramid after the show didn’t speak to One Soul who didn’t like love hurl rant positives about King Khan and BBQ Show they likely played most of these songs, oh my, hearing Waddlin’ Around on Myspace Love(d)! this song! they definitely played it and i Danced it if you like your garage go see ’em the garage band i Loved when i was an alt rocker search and destroy Deja Voodoo The Gruesomes were fine too. King Khan & BBQ Show Jazz Winnipeg Festival Sunday, June 28th. Pyramid. 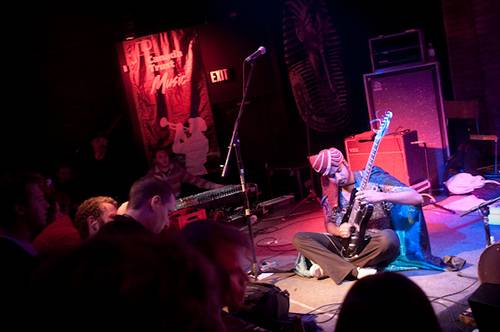