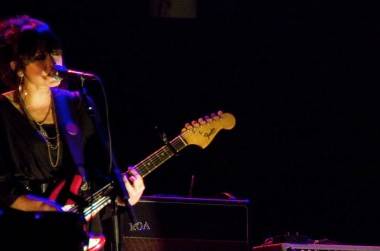 Ah, irony. Or is it? I’m confused about the term ever since people started tearing poor Alanis Morissette apart for her use of the word in her song “Ironic”. You know the one, where it rains on your wedding day.

But maybe this qualifies: Howling Bells moved from Sydney to London a few years ago, and were all set to make their debut record, but their producer Ken Nelson was too busy with a Coldplay record to get to them, and what was supposed to take three weeks took eight months. It took so long, the four Howling Bells – brother/sister Joel and Juanita Stein (guitarist and singer, respectively), Brendan Picchio (bassist) and Glenn Moule (drummer) – had to get jobs. But that’s not the ironic part; the ironic part is that the group has been opening for Coldplay – the every same band that had Juanita muttering “assholes” for the better part of a year.

Anyway, Howling Bells’ new album Radio Wars has some choice cuts, particularly “Cities Burning Down”. The band’s dark sense of drama and Juanita’s obvious charisma both on record and off stage make comparisons to Metric pretty easy, though the group’s a lot lighter on the keyboards.

But then they also have more modest songs like “Let’s Be Kids Again”, where the hooks quietly sink in before you know it’s happening. Perhaps the usher I overheard after their set opening for Coldplay at GM Place Saturday night (June 20) said it best. He was telling people coming in after Howling Bells that they’d missed a good band. “Everyone’s a critic,” I said. “Yeah, well, Coldplay was once an opening act, too,” he said. Too true.

I talked to Howling Bells backstage a little while after their set. (Thanks to Rich Adams from Nettwerk, btw.) Keep in mind I have no bloody idea which of the guys is talking in the following, so I tried to attribute the quotes evenly between Brendan and Joel, who were the most talkative. 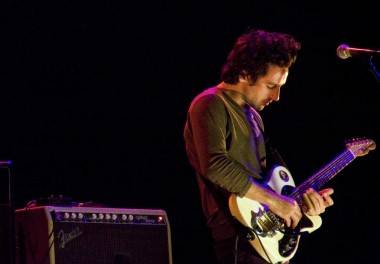 Shawn Conner: Going from the Sydney music scene to London, it must’ve been a world of difference.

Juanita: It was ferocious.

Juanita: Everything about London was scary. Not just music. Everything. The smell, the taste. Prices didn’t matter because we didn’t have any money at all.

Juanita: We made sure everything was free. For a little while.

BP: But it was very exciting, too. You’d go into a news agent’s and there were kids wrapped around the music section. You couldn’t get through them to get an NME.

SC: Music is such a culture there.

Juanita: There are never NME’s left. They’re gone within 24 hours. In Australia we have like two news agencies.

SC: Speaking of NME, you guys’ve gotten a lot of good press from those guys. Do they still like a band one day, and hate them the next?

BP: They’ve definitely kept their side. That’s who they are.

Juanita: They like to keep you on your feet. Some magazines which I won’t name have had the same artists on the cover for the last four years. I can’t see other than maybe they’ll keep every few years putting Nirvana on the cover, imagine them doing that. 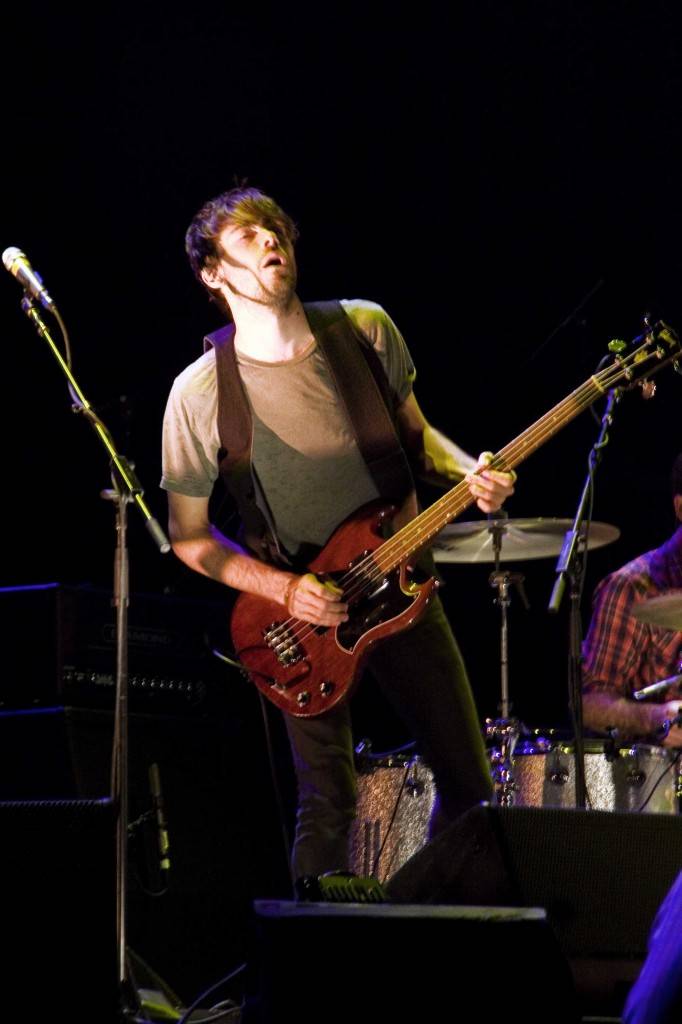 SC: Moving to London must’ve made you stronger as a band.

Glenn Moule: It tested us.

Joel: It’s such a tough place to live you can find yourself in some tight spots. Sometimes you get in pretty tough situations. There are dodgy people there. It’s not as free-flowing as Australia. You have to look out for each other.

Juanita: It’s not so much like that in London, people promising you things. You’re either fucking crap, or you’re great. That’s it.

SC: It seems like touring would be relaxing after living in London.

Joel: It is. Well, I find this tour to be relaxing.

BP: This has been the friendliest bunch of people. Not just the bands but the crew. The crowds. Everyone’s gone out of their way to make us really at home.

GM: Once you’ve finished playing and you go out to see the next band people actually come up to you and say, “Wow, that was an amazing show.”

SC: Are you frustrated playing a half hour set?

BP: We have so much excess energy after we play the show. Us and Snow Patrol. We end up going crazy together. You just start getting that flow. It’s a tease, like making love and stopping.

SC: When you first moved to London, you planned to make the album in three weeks…

Juanita: We had no idea what we were doing.

SC: You just woke up in London.

GM: Which was the best decision.

Joel: It was part naivete, part adventure. We got there and we thought we were going to make a record pretty soon. And it turned out it was Coldplay delaying the making of the record. It took them eight months. And the other night Chris [Martin, Coldplay frontman] apologized ’cos he had no idea.

BP: We all got different jobs, we lived on the floor of this house.

Joel: It was smaller than this room.

SC: Who had the worst job?

Juanita: [to Brendan and Glenn] Didn’t you guys work at a place selling locks or curtains?

BP: Double-glazed windows. We were doing call-ups. It was exactly like The Office. It was unbelievable. Interesting days.

SC: But the new record was a breeze, comparatively.

Juanita: Emotionally it was just as involved. The logistics were easier.

Joel: Uh, hold on. We waited a long time. Nearly a year before everything fell into place.

Juanita: We were finishing with our old label [Bella Union], there was a lot of red tape.

Joel: We made this record and we were pumped and excited. Nine months later it came out. That nine months was torture.

Juanita: We’ve got the next record ready to go. We don’t want to wait.

Joel: We’re just going to record it. The waiting in between –

SC: When you say emotionally involved…

Juanita: As in, just as involved in the process, in a positive way. Collectively more so, because we wrote this record together. The first record was a lot more my songs, written in a dark room mourning lost love. This one was all of us.

SC: So as brother and sister, who looked at who and said Hey, we should form a band?

Juanita: I think I came into your room…

Joel: I was in my top bunk bed learning guitar.

Juanita: He had picked up guitar and was completely infatuated with Hendrix.

Juanita: And I would hear him every day, just screeching. And I was starting to write a lot of songs.

SC: You didn’t go through a teenage poetry phase?

Joel: Is that a Canadian thing?

Juanita: I suppose the lyrics to the songs were a kind of poetry… All of us come from musical families. Our dad’s a great songwriter.

SC: Has he done any recording?

Juanita: Oh yeah, we covered one of his songs at the end of the last record.

Juanita: He’s great, he’s written for Blind Boys of Alabama. It’s a lot more blues-y gospel-y than what we do.

SC: Sounds like a great household to grow up in.

Joel: Confusing and loud, but great as well.

SC: The video for “Cities Burning Down”… I always like apocalyptic imagery… you guys dressed as bikers, what’s that from? An homage?

Juanita: Definitely Rumblefish, one of our favourites. The Wild One. We’re all huge fans of ’60s films, and these guys ride motorcycles. The motorcycle culture is very sexy. 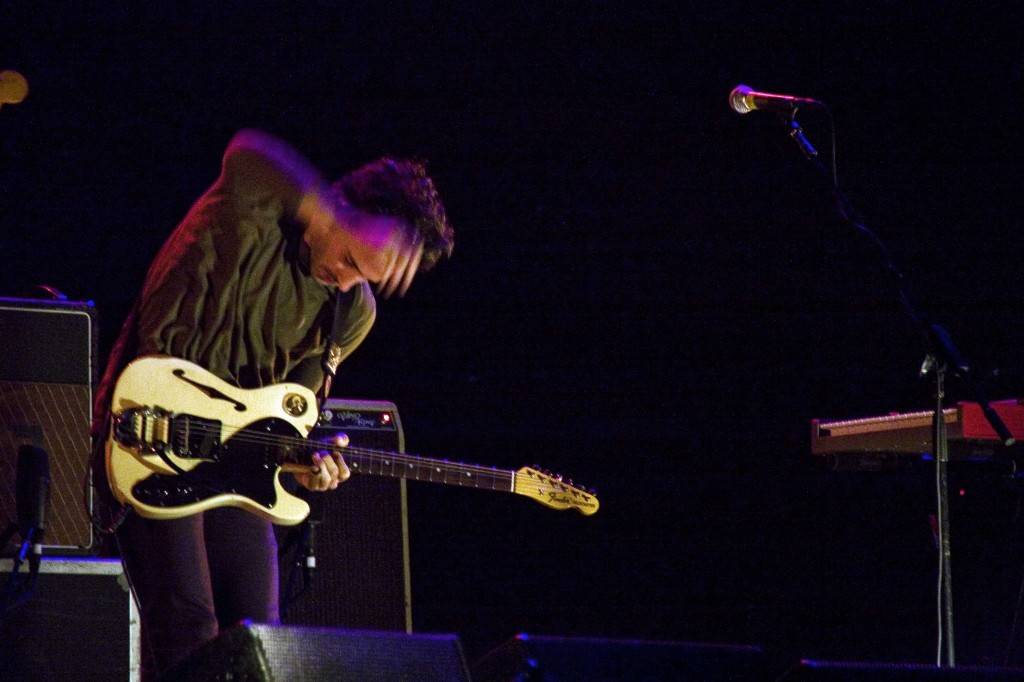