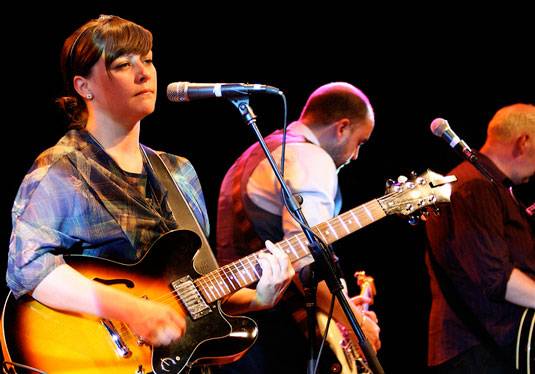 Camera Obscura seemed to be having an off night. This was my first time seeing the band, though, so I might not have thought “dour Scots mode” was their normal setting except for two things. Halfway or more through the set I overheard a guy in the audience say to a friend that he thought singer Tracyanne Campbell might have jetlag, because she seemed tired. (Though the Scottish group is already a week into its tour.) Then, a friend who’d seen them the last time they’d come through town, said that the previous show had been so much better, with way more energy and upbeat tunes. Tonight, she said, she’d caught Campbell shooting dirty looks at guitarist Kenny McKeeve.

I don’t know about that, but there was definitely something missing from last night’s set. The seven-piece (normally a six-piece, but augmented by a percussionist) made a glorious noise at times but the set lagged from too many mid-tempo numbers. I’d read that the show took awhile to get started, so when Campbell & co. finally launched into the Motown-ish number “Let’s Get Out of the Country” I was ready to rock; but the fun didn’t last. Except for a few songs, I felt like I could’ve just stayed home and listened to the CD. And then I wouldn’t have emptied the contents of my bank account for the My Maudlin Career vinyl, a T-shirt, and even a 7″ single because I liked the title (“The World is Full of Strangers”) of the B-side.

Still, I loved hearing “French Navy” from the new Camera Obscura album, My Maudlin Career, and of course, the splendidly melancholy “Lloyd I’m Ready to Be Heartbroken” is always a treat.

And opener Agent Ribbons was a pleasant discovery. The tunes on the Sacramento trio’s Myspace page give a pretty good picture of its determinedly unpolished country/folk, with Southern Gothic undertones, sound. But live, the band really kicked it. Singer Natalie Gordon can wail in a shiver-inducing way that reminded me of Carla Bozulich of the mighty Geraldine Fibbers. And then, they brought out the gimp – actually, a 6’+ dude in striped socks, a boxing glove and a birdmask. Birdman tambourin’d his tambourine while Gordon, drummer Lauren Hess and violinist Naomi Cherie brought things to a rocking close. 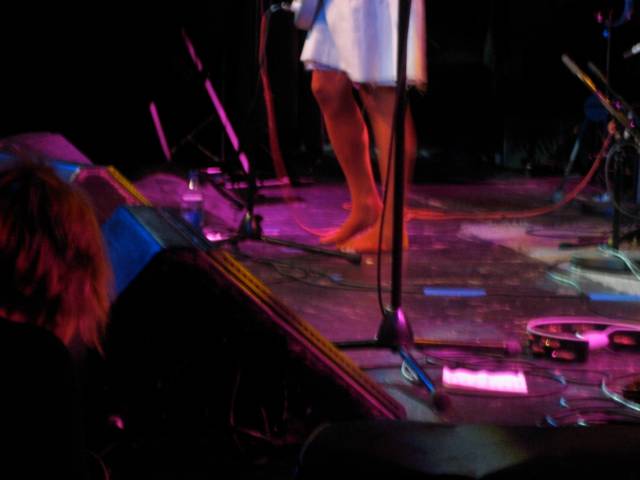 Agent Ribbons have one full-length CD, On Time Travel and Romance, from 2006, and I recommend it – some of the lyrics are perfect for hot summer nights (from “Don’t Touch Me”: “Don’t touch me/Unless you’re gonna say my name/While we do it/You know I wanna do it”; and from “Birds and Bees”: “Sticky and sweet/The orange trees are in heat/And the summer air is good enough to eat”). They have a new single out, and will be recording a new album for a fall release. Definitely a band I’ll be watching for more from, and not just because of Gordon’s sexy red stockings with the holes in the toe.

2 responses to “Camera Obscura at the Commodore Ballroom”