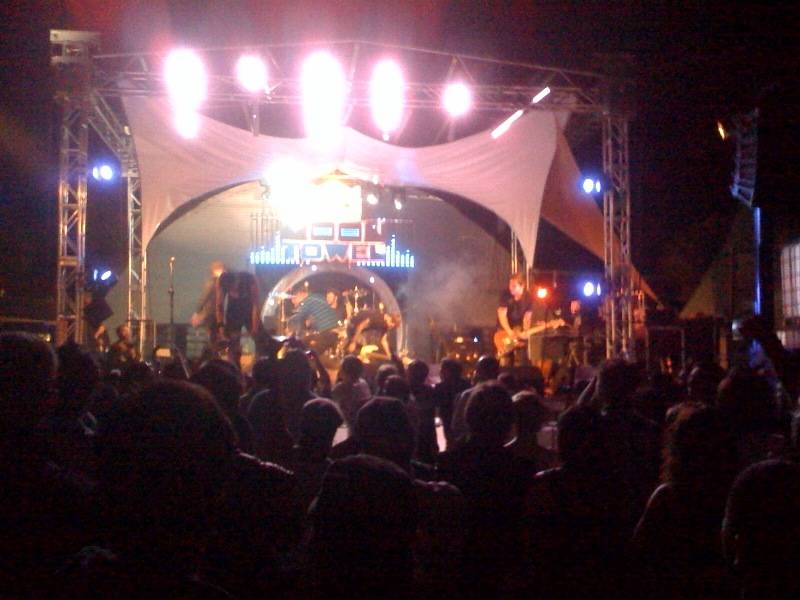 South by Southwest is a schizophrenic experience.

Last night I decided to just accept this dichotomy, resign myself to the realities of 21-century America, and walk right into the belly of the beast.

The Red Bull Moon Tower after-party was like a festival within a festival, with dozens of tents, neon-lit bars, vast video screens, taco stands, portable bathrooms, smoke machines, and rituals and laws all its own. A small army of security guards sat behind a bank of laptop computers cross-checking IDs against a master permission list. Once I had passed that test, I had to self-apply a temporary Red Bull tattoo to a part of my body that would be easily visible to any security guard who decided he wanted to check my bona fides. Finally I got inside the show and found myself in a whirling, blaring, shiny world of perfection as imagined by Madison Avenue (so much cleaner, better, more energetic, and more delicious than the outside world I had just stumbled in from). I felt like I had gained access to a village run by a marketing firm.

I went mainly to see The Riverboat Gamblers, an Austin punk band. They’re known for their high-energy performances and fuck-you attitude, and I wanted to see what they’d do once they were on a stage so full of high-tech, Red Bull-funded gadgets. Part of me was wondering if they’d rail against the unrelenting commercialism of the event. Because that’s what punks do, right? They rant against things like corporate sponsorship and the perils of a market-saturated America. I wanted to know if an independent punk band could exist in Red Bull Fantasyland without something exploding (or at least a scene breaking out).

I shouldn’t have worried. In their own distorted way, The Riverboat Gamblers are just as safe and market-tested as any energy drink. They proudly display all the trappings of punk rock – the black jeans, the spiky hair, the sleeveless shirts and ripped sneakers – and they’ve mastered all its rituals – the screaming, the spitting, the grimacing, the microphone spinning and amplifier climbing. But it’s all a formula at this point. There’s no danger, no attempt to upset people’s expectations. Any threat punk rock once posed has been ritualized and formalized into a series of meaningless gestures and sounds that any suburban grandmother would recognize and accept with a shrug.

From my privileged spot on the side of the stage (requirements: one extra wrist-band, two more security checks), I watched a few shirtless jocks slam-dance their way through The Riverboat Gamblers’ set under the glow of the giant neon Red Bull sign. A friend turned to me and shouted above the noise, “This is what punk was created to destroy.”