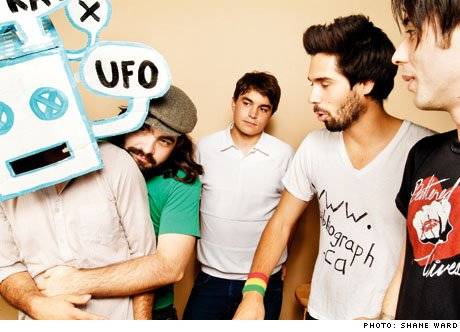 The Hold Steady, “Sequestered in Memphis” – You can’t help but breathe in the smell of stale beer that clings to this track. Think Springsteen with irony and a horn section, and there’s never been a more succinct portrait of dive bar pick-up culture than this one: “In bar light she looked alright/in daylight she looked desperate/that’s alright I was desperate too/I’m getting pretty sick of this interview.” Oh, and don’t worry, it’s more of an interrogation than an interview, ’cause when it comes to the Hold Steady, seedy stories are always a sure thing.

Jordin Sparks featuring Chris Brown – “No Air”. This track is glossy, overproduced melodrama at its finest, but it’s the video that really clinches it. Chris Brown is your urban teddy bear boyfriend (with diamond studs in both ears!) and Jordin Sparks, with her unassuming, large-featured beauty, is the Everywoman and a signal to teen girls everywhere that they too could be the object of Brown’s affection. The vibrant wardrobe that includes Sparks’ fuschia headband, emerald green, off-the-shoulder top, Brown’s two-tone Nike hightops, purple keffiyeh, and the duo’s matching red outfits – his a hoodie, hers a peacoat – make for a dreamy kind of cartoon love story. “No Air” is the video for the stylish set who like to indulge in histrionics whilst remaining freshly scrubbed.

Wolf Parade, “Call It a Ritual” – You know what you’re getting here, but that’s alright, ’cause it’s familiar and good and sometimes all you’re in the mood for is a little more of that ritualistic indie rock grit.

Hercules and Love Affair, “Blind” – It’s reassuring to know that Antony can let loose once in a while, but I guess the guy’s gotta hit the clubs if he wants to meet another boy to break his heart and provide fodder for his next heartwrenching album. This song seems to be at the head of that whole nu-disco movement that I still can’t decide if I like, but if most of it sounds like this track, I just may be converted.

No Age, “Eraser” and Women, “Black Rice” – I don’t know if it’s fair to put these tracks together, butÂ  both bands seem influenced by the lo-fi, noisiness of Wire, and both songs make me want to thrash all over the fucking dance floor, so whatevah, I do what I want!

Why? “The Hollows” – This track goes out to all my under-done, other tongued, lung long frontmen. If you dig that line, you’ll probably be into the rest of this catchy whine-rap track. Why? is made up of members from Clouddead, Dose One, Odd Nosdam and a bunch of other groupings I haven’t quite figured out–also, the lead dude looks like a hairy-spider version of Johnny Depp.

Fleet Foxes, “Sun It Rises” – Didn’t we already have a Mississippi folk revival? Either way, I’m sad to report that Sam Beam’s beard does not collaborate on this track. That’s alright though, the FF boys provide more than enough Southern Comfort to intoxicate a porch-full of wicker chair rocking, empty bottle blowing, beardos.

M83, “Kim & Jessie” – This track sounds so authentically ’80s you’llÂ  find yourself able to skip the usual guilt that arises after listening to those cloying, ironic throwback songs that have become so damn ubiquitous. Anthony Gonzalez captures the frenetic energy of a sexually-charged youth with pulsing synths and breathy vocals and the accompanying music video features a slow camera pan shot from beneath a line of rollerskating teen girls. If exposed panties don’t equal repressed sexual energy, I don’t know what does.